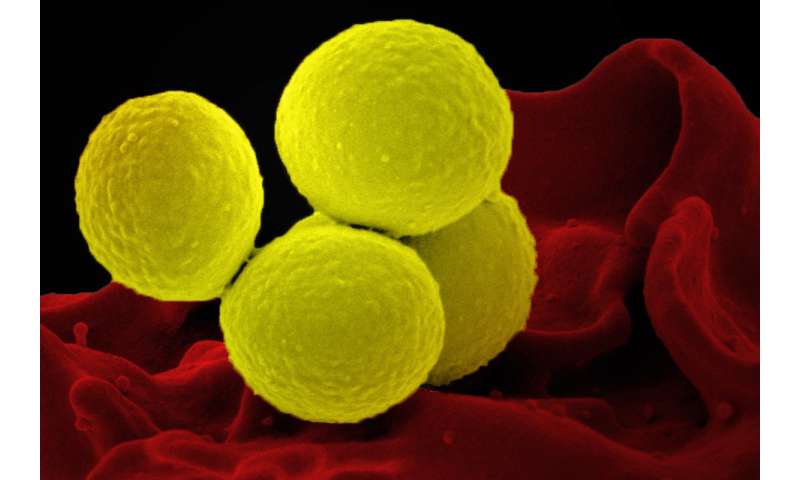 For sick or prematurely born babies spending their first days of life in a hospital’s neonatal intensive care unit (NICU), the soothing voice and gentle touch of a loving parent can have a tremendous impact toward a positive outcome—that is, unless mom or dad’s visit leaves the infant with something extra: a dangerous bacterial infection.

Now, a Johns Hopkins Medicine research team reports it has developed and tested a relatively simple strategy for reducing the chance of parents exposing their babies in the NICU to one of the most commonly diagnosed and potentially deadly microbial scourges in a hospital: Staphylococcus aureus. The researchers detailed the positive findings from their preliminary clinical trial in the Dec. 30, 2019, online posting by the Journal of the American Medical Association (JAMA).

“Traditional procedures for preventing hospital-acquired Staph infections in the NICU have primarily focused on keeping staff and facilities as sterile as possible,” says Aaron Milstone, M.D., M.H.S., associate hospital epidemiologist at the Johns Hopkins Hospital, professor of pediatrics at the Johns Hopkins University School of Medicine and lead author of the JAMA paper. “Our study is among the first to focus on parents as a source of the bacteria and then test the effectiveness of an intervention to combat the problem.”

According to the U.S. Centers for Disease Control and Prevention, an estimated 30% of the adult population are long-term carriers of Staphylococcus aureus bacteria. Most of the time, these people are healthy and the microorganisms they harbor cause no harm. However, in healthcare settings where patients may have weakened immune systems, the bacteria can become a serious, even deadly, threat. An unchecked spread of the bacteria—both the antibiotic-susceptible and antibiotic-resistant (such as methicillin-resistant Staphylococcus aureus, or MRSA) strains—can lead to severe complications, including bacteremia or sepsis (blood infections), pneumonia, endocarditis (heart valve infection) and osteomyelitis (bone infection).

In the NICU, S. aureus infections not only threaten a sick or premature infant’s survival but their neurological development as well. In a 2015 study, Milstone and others estimated that there are more than 5,000 cases of invasive S. aureus infections each year in NICUs across the nation and that 10% of the children will likely die before hospital discharge.

To reduce the spread of S. aureus, the Johns Hopkins Medicine researchers turned to a simple regimen for mothers and fathers to follow while their child is in intensive care. The preventive measure includes the application of an antibiotic (mupirocin) ointment into the nose and skin cleansing with a wipe containing 2% chlorhexidine gluconate, an antiseptic widely used on patients to remove surface bacteria around a surgical site before an operation.

The Treating Parents to Reduce NICU Transmission of S. aureus (TREAT Parents) clinical trial was conducted to test the proposed strategy’s effectiveness. The researchers selected for study 190 newborn babies admitted to two NICUs at Johns Hopkins-affiliated hospitals in Baltimore, Maryland, between November 2014 and December 2018. Each of the infants had at least one parent who tested positive for S. aureus when screened at the time of their child’s entry into the NICU. Baseline S. aureus counts were done for the infants at the same time.

The parents of 89 babies self-administered the antibiotic nasal ointment twice a day for five days and cleaned designated skin areas (hands, arms, legs, chest, neck, back and the skin between the buttocks and groin) with antiseptic wipes for the same time period. The control group, consisting of the remaining 101 parental couples, used identically packaged placebo treatments of petroleum jelly and non-antiseptic wipes.

Both sets of babies were monitored for S. aureus colonization until discharge from the NICU. Bacteria recovered from the infants were analyzed to determine if they were the same strain as seen in at least one parent.

Among the 190 infants studied overall, 42, or about 22%, acquired S. aureus that matched bacteria recovered from either their mother or father, or from both parents. In this group, four babies had MRSA strains acquired from a parent.

Of the 101 babies with parents in the control group, 29 (nearly 29%) had parentally acquired bacteria compared with only 13 of the 89 babies (nearly 15%) whose parents were given actual antibiotic ointment and antiseptic wipes to use.

“These results from our preliminary trial indicate that treatment with intranasal mupirocin and chlorhexidine wipes may significantly reduce the number of infants in the NICU who will get S. aureus from contact with a parent,” Milstone says. “It is our hope that one day this technique can be combined with personal cleanliness for medical staff and environmental safety protocols for facilities to provide a stronger defense against NICU-acquired infections.”