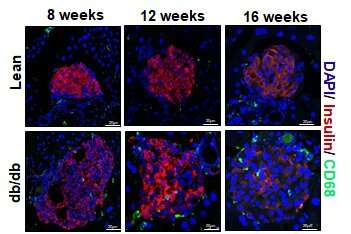 Nanyang Technological University, Singapore (NTU Singapore) scientists have discovered that a type of immune cell known as a pancreatic islet macrophage is capable of promoting insulin production during the pre-diabetes phase.

The scientists believe that the macrophages could be harnessed through new targeted treatments to prevent type 2 pre-diabetic patients from turning fully diabetic. Macrophages were not previously known to produce or regulate insulin, and had often been overlooked in diabetes research.

Working with an international team of scientists, the five-year study was led by Assistant Professor Yusuf Ali from NTU’s Lee Kong Chian School of Medicine. He wanted to investigate pre-diabetes research due to the general lack of awareness, understanding, and diagnoses for the condition.

“There are currently more than 300,000 people in Singapore and many more around the world who are living and coping with type 2 diabetes,” Assistant Professor Ali said. “However, even more people are living in the pre-diabetes phase, and if we could detect it early, it would be much easier to reverse any negative progression of the condition.”

The study was published in the peer-reviewed American Journal of Physiology—Endocrinology and Metabolism, and is supported by the Singapore Eye Research Institute (SERI), which provided the advanced imaging equipment for the research.

Located in organs such as the heart, lungs, and liver, macrophages are large, specialized cells that identify, envelope and even destroy certain cells. Pancreatic islet macrophages reside closely to beta cells in the pancreas—these are key cells responsible for the synthesis and secretion of the hormone insulin, which regulates blood sugar levels.

In pre-diabetic patients, cells in the muscles, body fat and liver start resisting the signals from insulin to remove glucose from the bloodstream and the beta cells by increasing insulin secretion. This is further supported by an increase in the mass and number of beta cells in a process called islet remodeling.

Assistant Professor Ali and his team used pre-diabetes mouse models as well as human insulin-producing cell preparations in the laboratory to establish that the findings are translatable for humans. This was conducted in accordance with Singapore’s research ethical permits and reporting guidelines.

Over the course of 16 weeks, macrophages near beta cells multiplied through cell division. When the scientists removed this subset of macrophages, islet remodeling and insulin levels fell, causing a transition from the pre-diabetes phase into full type 2 diabetes.

“The pre-diabetes phase varies from individual to individual. Some get pre-diabetes in a matter of months and develop full-blown diabetes, while others live with pre-diabetes for years. Building on our discovery, we now hope to fully uncover the role islet macrophages play and hopefully find ways to delay or reverse the progression of diabetes,” said Assistant Professor Ali.

Dr. Daniel Chew, head & senior consultant, Department of Endocrinology at Tan Tock Seng Hospital, who is not involved in the study, said, “In the course of development of type 2 diabetes, initially, insulin-secreting beta cells respond to the challenge of insulin resistance by producing more insulin, but later they fail, and produce less insulin. This research explores a novel mechanism for the compensatory phase of this phenomenon, sometimes called Starling’s Law of the pancreas. The investigators have demonstrated the importance of vascular remodeling of the pancreatic islets in which the beta cells reside and provide strong evidence that it is aided by resident macrophages (immune regulatory cells). Further elucidation of the mechanism by which macrophages enhance beta cell function could lead to novel therapies for prevention and treatment of type 2 diabetes.”

The NTU team aims to conduct deeper research in macrophage subsets to spur better targeted drugs and treatments for pre-diabetic patients and potentially reverse their condition.

Acknowledging the support of the research agencies in Singapore and individuals who donated their bodies to science after they had passed away, Assistant Professor Ali said, “We took years to validate this study using human islet preparations and we are appreciative of our clinical partners SERI and SingHealth, and especially to the people who donated their organs for research.”