The companies manage around half of NHS car parks, and their profits have soared as they aggressively pursue patients over fines.

One firm, Parking Eye, whose pre-tax profits have doubled in two years to £13million, has spent 17 months hounding a pensioner – for the sake of 50 pence.

Other patients complain of being hit with hefty fines after overstaying for a matter of seconds, while one disabled couple were fined £320 by Parking Eye, despite having a blue badge.

Those who fail to pay fines can be threatened with bailiffs, and campaigners warned these aggressive debt collection techniques ‘sit uncomfortably alongside the caring NHS’.

David Sampson, 69, paid £2.50 for a parking ticket when he went for a blood test at Coventry and Warwickshire NHS Trust in August 2018. 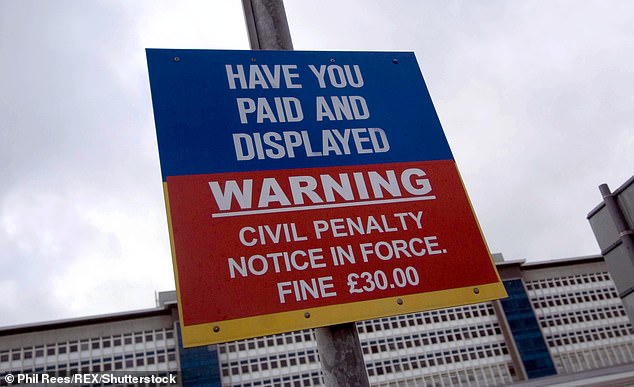 But he says a faulty parking machine, run by Parking Eye, meant only £2 was registered so his ticket covered 1 hour of parking and he overstayed by 27 minutes.

Since then Mr Sampson, a retired engineer who has worked on coin machines, has received ‘six or seven’ letters demanding payment of a £140 fine.

He has appealed as he is ‘100 per cent’ certain the machine failed to register 50p he put in, but Parking Eye will not relent.

And last month he received a letter plastered with the logo of the Channel 5 television show ‘Can’t Pay? We’ll take it away’. The programme follows bailiffs as they storm into debtors houses, rifling through drawers and seizing assets.

Mr Sampson said: ‘The sort of letters they are issuing makes it sound as if every moment they are going to come along and seize goods. It is demanding money with menace.

‘The letters have gradually got more threatening. The only way they’ll get money out of me is if I got to court.’ 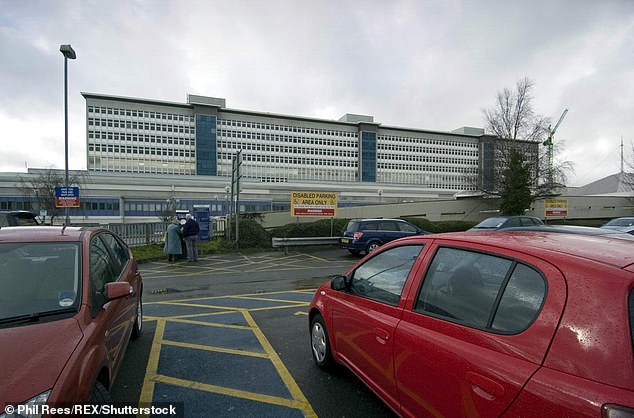 One firm, Parking Eye, whose pre-tax profits have doubled in two years to £13million, has spent 17 months hounding a pensioner – for the sake of 50 pence. File image used

Parking Eye previously also attempted to fine a volunteer ambulance driver for dropping patients off at the hospital entrance – although he successfully overturned the penalty.

Rachel Power, chief executive of the Patients Association, said: ‘It is outrageous for any hospital to threaten patients.

‘One can only imagine the horror and stress this must cause people, on top of having to cope with their illness.’

No more fees for those ‘in greatest need’

Hospitals are being ordered to abolish parking charges for seriously ill patients, the disabled and the parents of sick children.

From April, trusts will be obliged to offer exemptions to certain groups of visitors and staff deemed to be ‘in the greatest need’. They are likely to include patients who need chemotherapy and doctors and nurses working at night.

The Department of Health is drawing up a set of compulsory guidelines on hospital parking which will be issued to trusts in four months’ time.

These will outline exactly which patients and staff should be exempt and – crucially – will replace rules which hospitals currently set themselves. If trusts ignore the new guidelines – as has happened in the past – the Government will consider enshrining them in law.

The Tories had promised to abolish some parking charges in their manifesto, and Boris Johnson reiterated the pledge in the Queen’s Speech last week.

Mr Johnson claims the NHS is his ‘number one priority’ as he attempts to cement the support of voters who have switched from Labour.

Although campaigners tentatively welcomed today’s announcement, they pointed out most hospital visitors and staff will still have to pay.

Latest figures show that one in three hospitals raised parking fees last year as they raked in record profits from the ‘tax on the sick’.

In a survey of 125 NHS trusts, 65 said their car parks were managed by a private company. Of these, at least 23 private firms collect all of the income from fines.

Boris Johnson has today pledged to scrap hospital car parking charges ‘for those in greatest need’, including blue badge holders and patients who regularly attend appointments for long-term conditions.

Hospital trusts in England will also be expected to give free parking at specific times to parents with sick children staying overnight and staff on night shifts. The code will come in to effect in April.

But some campaigners have expressed concern at the plans, as most patients and visitors will still have to pay for parking.

Unison head of health Sara Gorton criticised ‘money-grabbing’ private firms for ‘exploiting’ those with no other option but to pay for parking. She added: ‘People are being hounded over minuscule debts… This sits uncomfortably alongside the caring NHS.’

Commenting on Mr Sampson’s case, a Parking Eye spokesman said an independent appeals body had reviewed the case and ruled in their favour.

A Department of Health and Social Care spokesman said nobody should be ‘subjected to unfair parking charges’ and that they should be dropped ‘in circumstances where overstaying is out of the driver’s control’.