Boy, 13, born with rare ‘butterfly skin’ disease and abandoned at the hospital at birth is now battling lymphoma too

A Wisconsin boy with a rare disease that causes his skin to blister at the slightest touch has now been diagnosed with cancer.

Charlie Knuth, 13, from Darboy, was adopted by his parents after he was abandoned at the hospital as a baby, reported WFRV.

He suffers from epidermolysis bullosa (EB), a rare genetic tissue disorder that causes the skin to blister and burst, leaving raw sores that are susceptible to infections.

Charlie has lived most of his life wrapped in bandages and has to take special baths every day to treat his sores and keep them from getting infected.

But the teenager is now facing a new battle after being diagnosed earlier this year with lymphoma, a cancer of the immune system. 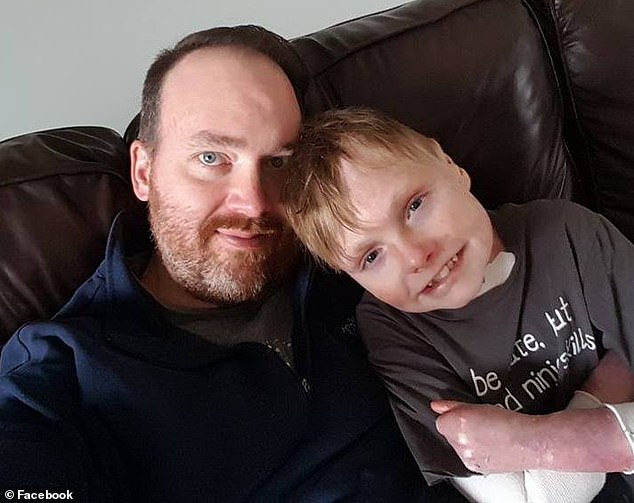 Charlie Knuth, 13, from Darboy, Wisconsin, was born with a rare skin disorder. Pictured: Charlie, right, with his father, Kevin 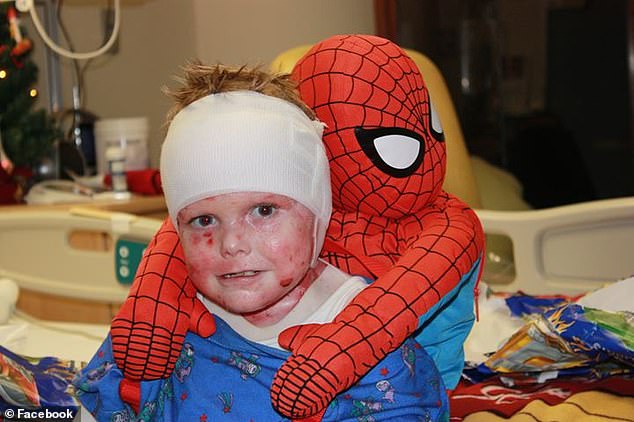 The disorder, known as epidermolysis bullosa, causes the skin to blister and burst at the slightest touch and leaves raw sores. Pictured: Charlie in the hospital)

Charlie’s mother, Trisha, told DailyMail.com that her son was abandoned at the hospital by his birth parents.

She and her husband, Kevin, foster children with medical needs and they got a call two weeks before their foster care license was about to expire about Charlie.

‘Doctors told me he would die in the first year of life and my job was to keep him as comfortable as possible,’ she said.

‘Instead of declining in health at our home….he thrived. His bio parents rights were terminated and we began the process of adoption. The process to adopt took about a year.’

Sufferers of EB are missing type VII collagen, a protein that allows the top layer of skin to bind with the bottom layers.

The slightest movement can causes the skin to immediately and continuously fall off.

The disorder is very rare, and is estimated to occur in 20 newborns per one million live births in the US, according to Stanford Children’s Hospital.

About 87 percent of children born with EB die during their first year of life.

There is no cure for EB so treatment aims at preventing blisters from becoming infected.

Charlie’s mother, Trisha Knuth, said she and his father, Kevin, have tried several measures to help treat her son, including creams, lotions and gloves.

He’s also undergone two stem cell transplants, in which new sheets of skin grown and graft over the wounds.

In 2017, Charlie underwent surgery to restore the use of his hands, which were degenerating due to his condition.

Without a surgery, his hands would be covered in scar tissue.

‘The scar tissue will actually build up between all the web spaces between each finger, and the palms, and grow right over the top of the hand so people are left with just nothing but mitts,’ Trisha told WFRV.

According to the station, during the surgery, skin was taken from Charlie’s thighs to use on his hands.

Titanium rods were also inserted into each of his fingers, and kept there for five weeks, to prevent them from curling into his palms. 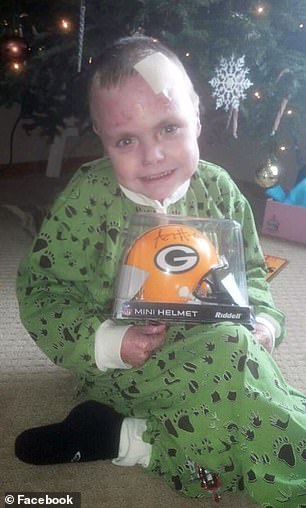 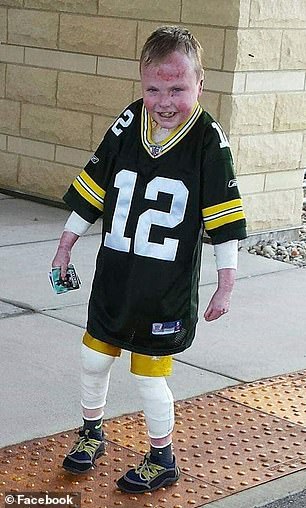 Charlie (left and right) was abandoned at a hospital before being adopted by his current parents. Earlier this month, he was diagnosed with lymphoma, a cancer of immune system cells 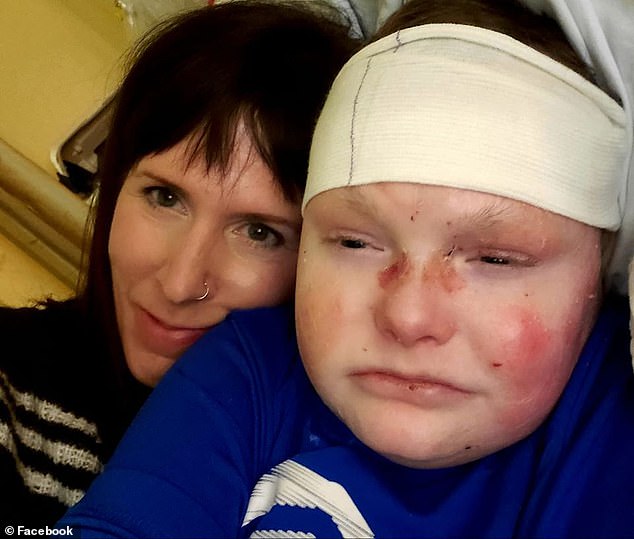 His parents said they are traveling to Minnesota to figure out what stage his cancer is at and what treatment he will undergo. Pictured: Charlie, right, with his mother, Trisha

On Wednesday, Trisha posted on Facebook that her son was diagnosed with lymphoma.

Lymphoma is cancer that begins in the lymphocytes, which are immune system cells that fight infection.

There are two types of the cancer, Non-Hodgkin’s and Hodgkin’s, but it’s not clear which type Charlie has.

Signs and symptoms include swelling of the lymph nodes, fever, fatigue, shortness of breath and sudden weight loss.

Treatment varies and can include chemotherapy, radiation therapy and immunotherapy.

It is estimated that 82,310 people will be diagnosed with lymphoma in 2019 and that 20,970 will die, according to the American Cancer Society.

In the Facebook post, Trisha wrote: ‘My head is spinning and my heart is breaking. My sweet boy.’

Charlie’s mother added the family will be traveling to Minnesota so his cancer can get staged and they can assess treatment options.