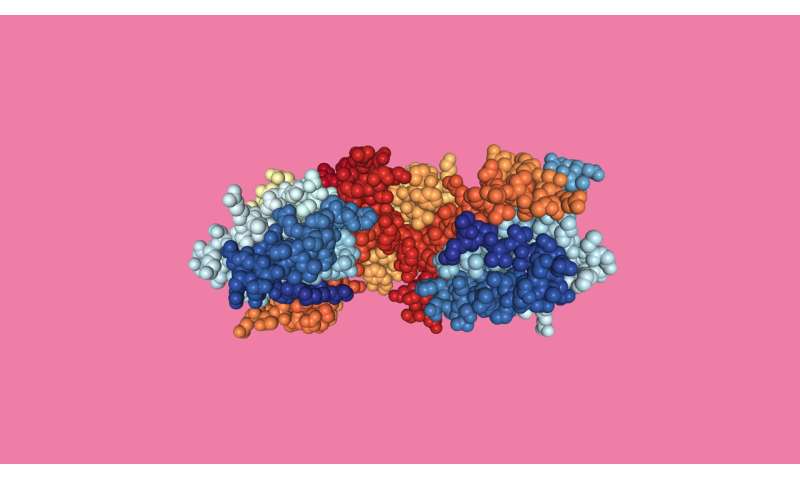 A new study has uncovered a previously unknown role for the enzyme EXD2, identifying it as a potential drug target for cancer therapy.

The discovery also suggests that by blocking EXD2 in cells that already lack fully-functioning BRCA1 and BRCA2 proteins—which are also involved in DNA repair—cancer cells are unable to survive.

A team at The Institute of Cancer Research, London, believe BRCA tumours’ reliance on EXD2 to stay alive could be used to pave the way for a brand new, targeted approach to treating cancer.

Importantly, mutations in the BRCA1 or BRCA2 genes account for up to 80% of inherited cases of breast and ovarian cancer.

The study, published in Molecular Cell, and largely funded by the ICR—a charity and research institute—highlights an approach known as ‘synthetic lethality’, which focuses on exploiting two key genes that cancer cells need to survive. Where one of these two genes does not function properly due to a mutation, blocking the other with a drug has a synthetic lethal effect, causing the cancer cell to die.

Furthermore, researchers showed that in cells lacking both EXD2 and BRCA1 or BRCA2, replication forks malfunctioned—producing a catastrophic level of DNA damage, and cells were unable to survive as a consequence.

Scientists at the ICR are now screening for small molecule inhibitors that will block the function of EXD2. They are also exploring whether the probable drug target would be able to support survival of other cancer types—such as pancreatic and prostate cancer, which also have BRCA1/2 gene mutations.

Treatment for tumours with BRCA mutations has shifted recently with the approval of PARP inhibitors like olaparib. However, while these drugs often lead to positive responses in cancer patients, tumours eventually evolve resistance so the treatment stops working.

As a consequence, there is an urgent need for more effective targeted treatments that are able to overcome cancer drug resistance. This is the focus of the ICR’s planned £75 million Centre for Cancer Drug Discovery, which will house an ambitious ‘Darwinian’ drug discovery programme.

The study also sheds light on the function of EXD2, suggesting that it plays a key role in protecting cells against DNA damage during genome duplication.

As the DNA double helix is unwound and opened in preparation for DNA replication, two Y-shaped structures—known as replication forks—are formed. This is the area where proteins are assembled to coordinate the replication process.

Replication stress occurs when DNA mistakes or unusual DNA structures are encountered during replication, which can result in stalled replication forks.

The new study has shown that EXD2 helps stabilise and restart stalled replication forks—like an engineer fixing and maintaining the machinery that helps make copies of DNA. In this way, EXD2 avoids the generation of DNA damage and maintains genome stability.

Researchers revealed that EXD2 achieves this by counteracting fork reversal—a process where replication forks reverse their course when they encounter DNA mistakes.

Fork reversal is a key protective mechanism aimed at preventing DNA breaks—however, too much of it can be problematic. By counteracting it, EXD2 avoids uncontrolled DNA degradation and manages to restart the forks.

Professor Wojciech Niedzwiedz, team leader of the Genome Instability and Cancer group at the ICR, said:

“Our research shows that tumours with mutations in the BRCA genes need EXD2 to survive. This is really exciting from a clinical perspective, as it means that pharmacological inhibition of EXD2’s function could be a new therapeutic strategy to develop more effective targeted drugs for cancer treatment.