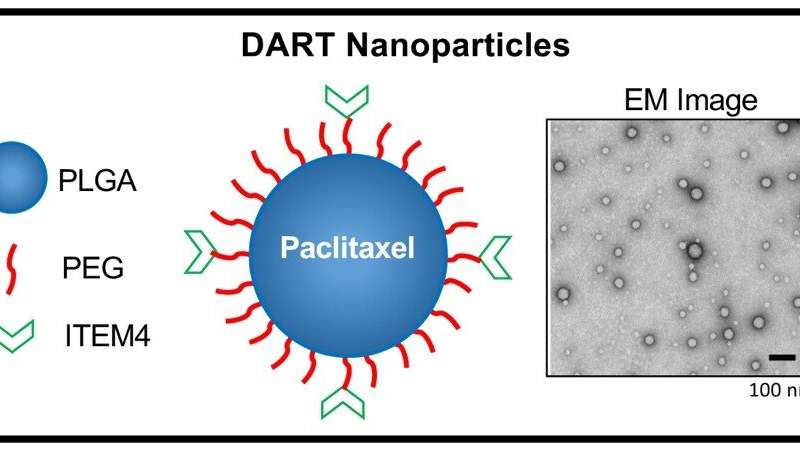 Researchers at the University of Maryland School of Medicine (UMSOM) developed a new nanoparticle drug formulation that targets a specific receptor on cancer cells, and appears to be more effective than a standard nanoparticle therapy currently on the market to treat metastatic breast cancer. The study, published today in the journal Science Advances, found that the new ‘DART’ nanoparticles bypass healthy cells and tissues and bind to tumor cells, dispersing evenly throughout the tumor while releasing the chemotherapy drug paclitaxel.

“The marketed drug Abraxane, a nanoformulation containing paclitaxel that is currently used to treat women with aggressive breast cancer, is an effective agent, but it was not designed to selectively deliver paclitaxel to only the cancerous cells within the body,” said study corresponding co-author Jeffrey Winkles, Ph.D., Professor of Surgery at UMSOM. “Our DART nanoparticle specifically targets the Fn14 receptor found abundantly on breast cancer cells; it uses this receptor to gain entry through the plasma membrane and deliver the drug to destroy the cancer.” Dr. Winkles’ group discovered the Fn14 receptor and described its potential as a target for new therapeutics more than a decade ago.

For this study, UMSOM researchers engineered and tested a new therapeutic nanoparticle platform to deliver the drug paclitaxel to treat triple-negative breast cancer. About one in five women with breast cancer have this type of aggressive tumor, which is particularly difficult to treat; these cancers lack receptors commonly expressed by most breast cancer cells, like hormone receptors, for which effective drugs have been designed. But many triple-negative breast cancers express high levels of Fn14; indeed, most solid tumor types, including lung, prostate and colorectal cancer, overexpress this cell surface receptor.

“After much initial anticipation and some disappointments in the field, nanoparticle delivery systems for cancer treatment are starting to show real promise for patients,” said study co-author Graeme Woodworth, MD, Professor and Interim Chair in the Department of Neurosurgery at UMSOM. “We established a proof-of-concept with this study, outlining the design of an optimized nanoparticle delivery system that balances the specific binding to cancer cells while minimizing non-specific, off-target binding to other cells in a very fine-tuned way.”

To accomplish this, the research team attached a monoclonal antibody called ITEM 4 to the surface of the nanoparticle because it specifically binds to Fn14, providing a key to unlock entry into the cancer cell. The surface of the nanoparticles was also coated with polyethylene glycol to keep them circulating through the bloodstream and lymph system until they reached the tumor and to prevent them from being quickly flushed out of the body.

“Many drug delivery carriers exhibit nonspecific binding to healthy cells and tissues in addition to the diseased cells they are targeting, which often leads to unintended side effects or toxicities,” said study corresponding co-author Anthony Kim, Ph.D., Associate Professor of Neurosurgery and Pharmacology at UMSOM. “This DART nanoparticle platform has unique capabilities to improve therapeutic delivery to difficult-to-treat locations within the body, while also allowing us to potentially increase the maximum tolerated dose of the encapsulated drug without increasing side effects to patients.”

The researchers then filled their optimized DART nanoparticle formulation with paclitaxel and tested it against Abraxane (the marketed nanoparticle which also contains paclitaxel) in animals with triple-negative breast cancer tumors. In one set of experiments, the nanoparticles were delivered to mice harboring breast tumors grown above the natural breast region. They found the DART formulation led to a significantly increased median overall survival (68 days) compared to Abraxane treatment (45 days). They saw a clear benefit to using the DART nanoparticles when they compared the treatments again in animals that harbored breast tumors implanted in the brain (akin to a metastatic brain tumor).

“This is a compelling finding and significant step forward in the use of nanoparticles to treat cancer,” said UMSOM Dean E. Albert Reece, MD, Ph.D., MBA, University Executive Vice President for Medical Affairs and the John Z. and Akiko K. Bowers Distinguished Professor. “Our faculty continue to lead in making breakthrough discoveries that help patients with the most difficult to treat cancers.”

The UMSOM researchers are members of the University of Maryland Marlene and Stewart Greenebaum Comprehensive Cancer Center. A former Ph.D. student, Jimena Dancy, Ph.D., and a former Postdoctoral Fellow, Aniket Wadajkar, Ph.D., are listed as co-first authors on the publication. Researchers from the Translational Genomics Research Institute in Phoenix, Arizona and the Mayo Clinic Arizona in Scottsdale also contributed to the work.

This study was primarily funded by the National Institutes of Health.