Statins and blood pressure pills are not a ‘free pass’ to avoid healthy habits, experts warn, as study finds those prescribed are 82% more likely to put on weight

People who take statins or blood pressure pills have been warned their medication is not a ‘free pass’ to avoid healthy habits.

A study of 40,000 people found those prescribed the medication are 82 per cent more likely to pile on pounds.

It could render the drugs – which are supposed to prevent life-threatening events such as heart attack and stroke – pointless. 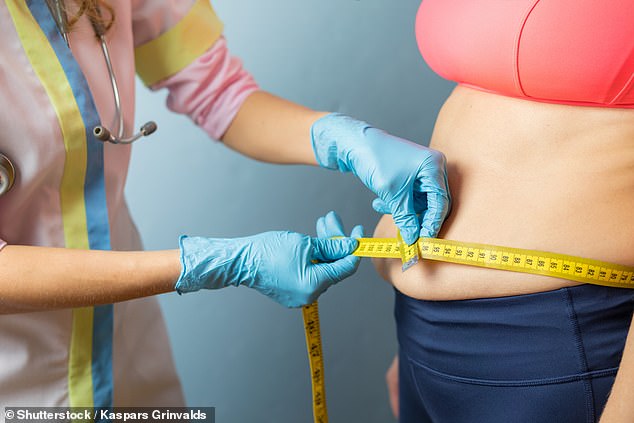 People who take statins or blood pressure pills have been warned their medication is not a ‘free pass’ to avoid healthy habits, as study shows prescriptions may lead to weight gain

The new study, led by the University of Turku in Finland, suggests the importance of healthy living needs to be driven home harder – or prescriptions may not be achieving their aims.

Study leader Dr Maarit Korhonen said: ‘Medication shouldn’t be viewed as a free-pass to continue or start an unhealthy lifestyle.

‘Our research sought to determine if people who started medications were making the lifestyle changes necessary to see health benefits.’

Statins lower ‘bad’ cholesterol, with studies suggesting one in every 50 patients who take the medication for five years will avoid a life-threatening heart attack or stroke.

However, critics say they are ‘overhyped’ because research indicates some worrying side effects, including muscle pain, liver damage and risk of diabetes.

And blood pressure pills, like ACE inhibitors, have been shown linked to an increased risk of lung cancer in early research.

WHY ARE STATINS CONTROVERSIAL?

Statins are the most commonly prescribed drug in the world and an estimated 30 per cent of all adults over the age of 40 are eligible to take them.

The cholesterol-lowering drugs are given to people believed to have a 10 per cent or higher risk of developing cardiovascular disease or having a heart attack or stroke within the next 10 years.

They are proven to help people who have suffered heart problems in the past, but experts say the thresholds may be too high, meaning benefits are outweighed by side effects for many people.

Nearly all men exceed the 10 per cent threshold by age 65, and all women do so by age 70 – regardless of their health.

Commonly reported side effects include headache, muscle pain and nausea, and statins can also increase the risk of developing type 2 diabetes, hepatitis, pancreatitis and vision problems or memory loss.

And Dr Rita Redberg, professor at the University of California, San Francisco told CNN in January that of 100 people taking statins for five years without having had a heart attack or stroke, ‘the best estimates are that one or two people will avoid a heart attack, and none will live longer, by taking statins.

In this study, Dr Korhonen and colleagues tracked more than 40,000 public-sector workers in Finland who had not been previously diagnosed with heart disease or stroke.

Using questionnaires, information about participants BMI, physical activity, alcohol consumption and smoking history were gathered every four years from 2000 to 2013.

Pharmacy data was used to determine if they began taking blood pressure or statin medications.

People prescribed either of the two treatments were eight per cent more likely to become physically inactive than those who were not on medication.

They were 82 per cent more likely to put on weight, according to the findings published in the Journal of the American Heart Association.

They were, however, 26 per cent more likely to quit smoking and cut back their alcohol consumption to some extent. Both are implicated in heart diseases.

While people often gain weight when they quit smoking, the researchers said this did not explain the BMI increase in the study participants.

Dr Korhonen said: ‘People starting on medications should be encouraged to continue or start managing their weight, be physically active, manage alcohol consumption and quit smoking.’

He said: ‘This study shows that the use of statins and blood pressure-lowering treatment is associated with reduced physical activity and an increase in body weight, but also less smoking in those prescribed these treatments.

‘The important message is that the use of drugs to prevent heart and circulatory diseases is not a substitute for maintaining a healthy lifestyle.’

Other academics said the study did not prove that the effects – such as weight gain – were the result of a prescription. There could be other influences.

‘There are many reasons why these people may have put on weight and become less active, not all of which are accounted for.’

Professor Naveed Sattar of the University of Glasgow, added: ‘This is an interesting observational study but it cannot prove a true cause and effect.

‘There has been some previous evidence from randomised control trials that statins might increase weight ever so slightly, which could be part of the explanation.

‘If we link these new findings to what we already know, it appears more should be done to help people improve their weight and activity when they start new drugs, as any positive changes they make will further lessen people’s risks and their quality of life, so a win-win.’

WHAT DOES IT MEAN IF I HAVE HIGH BLOOD PRESSURE?

High blood pressure, or hypertension, rarely has noticeable symptoms. But if untreated, it increases your risk of serious problems such as heart attacks and strokes.

More than one in four adults in the UK have high blood pressure, although many won’t realise it.

Blood pressure is recorded with two numbers. The systolic pressure (higher number) is the force at which your heart pumps blood around your body.

The diastolic pressure (lower number) is the resistance to the blood flow in the blood vessels. They’re both measured in millimetres of mercury (mmHg).

As a general guide:

If your blood pressure is too high, it puts extra strain on your blood vessels, heart and other organs, such as the brain, kidneys and eyes.

Persistent high blood pressure can increase your risk of a number of serious and potentially life-threatening conditions, such as: