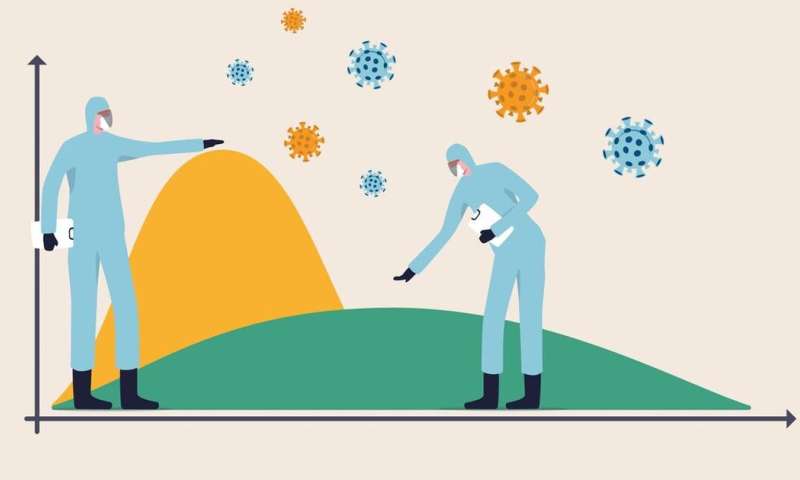 Since the global outbreak of COVID-19, researchers have scrambled to develop and share models which can predict how the virus will spread. This is inherently tricky, as we know so little about the disease, and a model is only ever as good as the information you put into it.

Researchers at Imperial College London produced a model that predicted there could be more than 510,000 deaths in the UK in the absence of preventative measures by the government, assuming that each person with the virus would give it to between 2 and 2.6 other people.

But that’s only one important consideration among many. Some of these may have a negligible effect on the predictions of these models, but others could affect the results dramatically. Here are six factors that are still not entirely known, and how they could lead to different outcomes.

People who have the virus but don’t display symptoms are known as asymptomatic patients. There’s some evidence that these people can still spread it to others, but we don’t know how infectious these people are.

This could be a real issue, as the advice for a long time was only for people showing signs of the illness to stay at home. It could be that there were plenty of infectious people going about their lives, unwittingly spreading the virus.

If there is more asymptomatic spread than modelers assume, their models will be too optimistic in situations where people without symptoms haven’t self-isolated.

Our understanding is that after the initial spillover—when the virus first jumped from an animal to a human—the virus only travels between humans, but we don’t yet have a full picture of how the virus spreads. To what extent can it be transmitted by people touching surfaces, for example? If modelers incorporate these other modes of contact with the virus, they are likely to see faster spreads as a result.

In the UK a new set of rules have only just been introduced (stay at home except for essential shopping and exercise and travel only to work if you’re a key worker). We have no idea how many people are planning on actually following them.

A YouGov poll found 93% in favor of these lockdown rules, so we might assume they’ll follow them, whereas 2% were strongly opposed, perhaps indicating they’ll flout them.

Measures to fight the pandemic work better if more people follow the rules, and modelers should provide results for both disciplined and less disciplined cases.

We know epidemics flare up earlier and more intensively in certain places, for instance diseases such as Ebola never spread fully around the globe. But we don’t know how tackling these hotspots early affects the spread of the virus later on.

This is important, as understanding hotspots—which are greatly affected by factors such as population density and cultural factors—can be vital in understanding the speed and spread of the disease.

In China, through tracking the rise of hotspots, they could tell the virus was spreading towards Shanghai and Beijing, driven by people traveling for their seasonal holidays. This allowed authorities to target their efforts.

How long does it take between you getting exposed to the virus and you becoming infectious to other people? We don’t know either, and the WHO mentions that “most estimates of the incubation period for COVID-19 range from one to 14 days”.

We need to know this as a key part of the advice is that people sharing a household with someone showing symptoms should self-isolate, regardless of whether they display any.

Someone could catch the virus from a family member right at the end of their illness, and then go outdoors before they start to feel ill themselves, spreading the virus as they go. A shorter incubation period also leads to a faster epidemic spread, so a good model should account for a range of possible incubation periods.

6. How the spread differs between countries

The virus doesn’t necessarily behave the same way in every country, or every area of a country. In some cultures, older people socialize a lot, whereas in others, they spend much of their time alone. A higher than average population density in cities, or on public transport, could influence how quickly the virus spreads.

Assuming the virus works the same everywhere could produce wildly inaccurate predictions. Understanding the spread at the local, regional and national level is needed to make the best models possible.

To take all this uncertainty into account, we have to run a massive amount of simulations.

Each time we add a factor, any of which could render the results useless if calculated badly, the amount of computer power needed to run the simulation grows.

If, for instance, we had a total of ten factors we needed to consider, and we wanted to try ten variations for each factor, we’d end up having to run 10 billion simulations—much more than the standard researcher’s laptop can handle.

At Brunel, we’ve handed over a number of machines to running coronavirus simulations (including a so-called grid computer, which bundles computers from different locations together to solve one overarching problem) – and in general, large computer communities such as supercomputing and cloud computing communities are keen to help.