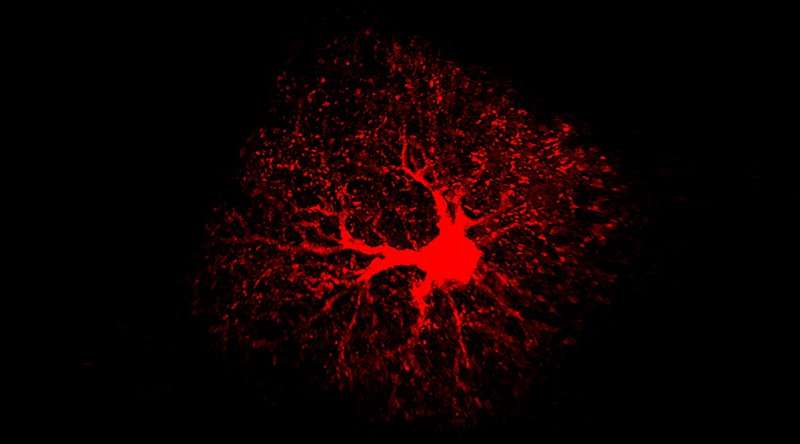 Researchers at Baylor College of Medicine reveal that astrocytes, the most abundant cells in the brain, play a direct role in the regulation of neuronal circuits involved in learning and memory. The findings appear in the journal Neuron.

“It has become increasingly clear that astrocytes are much more than supportive cells in the healthy adult brain. They play a direct role in a wide variety of complex and essential functions, including neuronal communication through synapses and regulation of neural circuit functions,” said corresponding author Dr. Benjamin Deneen, professor of neurosurgery and a member of the Center for Stem Cell and Regenerative Medicine at Baylor. “In this study, we show a new role of astrocytes in normal brain function.”

The researchers worked with a mouse model they had genetically engineered to lack the NFIA gene specifically in adult astrocytes in the entire brain. They analyzed several brain regions, looking for alterations in astrocyte morphology, physiology and gene expression signatures.

“We found that NFIA-deficient astrocytes presented defective shapes and altered functions,” said Deneen, who holds the Dr. Russell J. and Marian K. Blattner Chair and is a member of the Dan L Duncan Comprehensive Cancer Center at Baylor. “Surprisingly, although the NFIA gene was eliminated in all brain regions, only the astrocytes in the hippocampus were severely altered. Other regions, such as the cortex and the brain stem, were not affected.”

Astrocytes in the hippocampus also had less calcium activity—calcium is an indicator of astrocyte function—as well as a reduced ability to detect neurotransmitters released from neurons. NFIA-deficient astrocytes also were not as closely associated with neurons as normal astrocytes.

Importantly, all these morphological and functional alterations were linked to defects in the animals’ ability to learn and remember, providing the first evidence that astrocytes are to some extent controlling the neuronal circuits that mediate learning and memory.