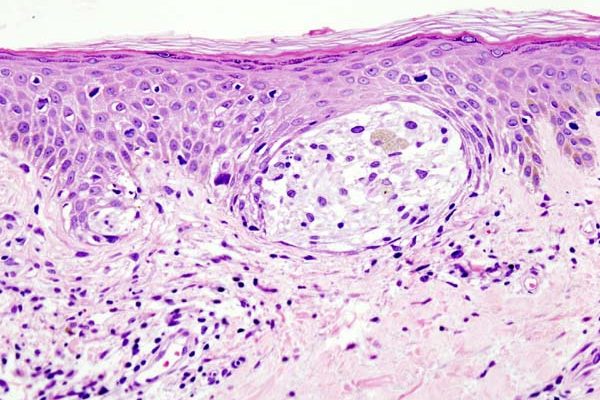 A promising route to develop new treatments for skin cancer has been identified by University of Bath scientists, who have found a molecule that suppresses melanoma tumor growth.

Although the research is at an early stage, the team hope that their work could help develop new ways to combat melanoma and potentially other cancers too.

IncRNAs are molecules transcribed from our DNA that don’t make protein and whose functions remain largely unknown. The particular group of IncRNAs the team were interested in are thought to be involved in cancer.

From a group of 245 IncRNAs that were associated with melanomas they identified one, called Disrupted In Renal Carcinoma 3 (DIRC3), which acted as a tumor suppressor to block the spread of human melanoma cells when grown in lab experiments.

By using gene-editing to switch off production of DIRC3, the team saw that “anchorage-independent growth”—a hallmark of malignant cancer spread—drastically increased by between two to eight times.

Furthermore the scientists showed that DIRC3 switches on the key tumor suppressor IGFBP5 gene, revealing that it plays a role in the complex networks governing the expression of genes important for melanoma growth and spread to other parts of the body.

The study is published in PLOS Genetics.

Dr. Keith Vance, from the University of Bath Department of Biology & Biochemistry, said: “Although it’s early stages we are excited by the potential of DIRC3 activating drugs to become a new way to treat skin cancer. This research makes vital steps towards any future therapy development.

“Great strides have recently been made in treating melanoma. However, not all patients respond to current therapies and most skin cancers become drug resistant over time, so a new way to treat it could be another tool in combating the disease.