Researchers at Washington University School of Medicine in St. Louis hope to improve soldiers’ options by developing the next generation of combat-ready personal protective equipment (PPE). Funding the work is a subcontract to the School of Medicine that is part of a $16.4 million contract awarded to U.S. research and development company Charles River Analytics from the U.S. government’s Defense Advanced Research Projects Agency (DARPA).

The goal is to develop personalized protective biosystems that would include living factories of organisms genetically engineered to produce anti-nerve agents, antibodies or other biological antidotes to a variety of chemical or biological threats. The idea is that these living factories — somewhat like the commensal bacteria comprising the gut microbiome — would create a symbiotic relationship with the human body, secreting protective molecules into the bloodstream that could neutralize nerve agents or block weaponized viruses.

To achieve these goals, the Washington University team will harness knowledge of the genetics of helminths — more specifically, organisms commonly known as hookworms.

“We will explore ways to use hookworms to generate prophylactic molecules within a subject’s body to neutralize threats that soldiers may encounter in war zones or other high-risk environments,” said Makedonka Mitreva, PhD, a professor of medicine and of genetics. 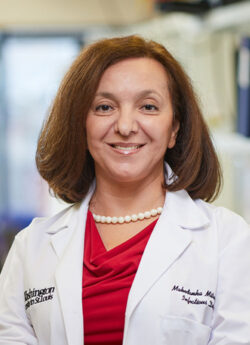 “Hookworms have evolved a sophisticated system to secrete molecules that allow them live in the healthy human gut for many years without causing major health problems,” she said. “Research has demonstrated that controlled hookworm infections in experimental settings do not cause adverse effects in healthy people. So, we will harness these elements of controlled hookworm infection, along with our ability to genetically modify these organisms to produce antibodies or other proteins that act as protective molecules from within the human body, to develop a next-generation system to protect combat troops from chemical and biological threats.”

The hookworms potentially could be engineered to secrete enzymes that break apart or block neurotoxins, such as sarin gas, for example. Similarly, the hookworms could be genetically engineered to produce antibodies against dangerous bacteria, such as anthrax, or life-threatening viruses, such as Ebola and SARS-CoV-2.

The Food and Drug Administration already has approved certain helminths, including hookworms, for investigational use in human clinical trials. Some of these helminths live in the upper intestine, and scientists are investigating their use in the treatment of gastrointestinal disorders and other diseases.

“Some of the molecules that hookworms secrete have anti-inflammatory properties,” Mitreva said. “These organisms can survive longer when the environment they live in is healthy. So, they do what they can to help maintain that healthy gut environment. Because of this, other research groups have investigated certain helminths as therapies for inflammatory gastrointestinal diseases.”

Mitreva also explained that hookworms can’t reproduce inside the human gut, so in a controlled environment, the hookworms that make up the initial therapy can remain there for years without causing problems. Hookworms have a complex life cycle that includes free-living eggs and early larvae stages that must take place in soil. In a natural infection, people typically become infected by walking barefoot in parts of the world where hookworms are endemic. Such infections can lead to malnutrition in young children or cause health problems in those who are immunocompromised. But controlled hookworm infections — with a set number of organisms given in a clinical trial setting — have not been shown to cause problems in healthy adults. The infections also can be cleared from the body with widely available anti-helminthic drugs.

While Washington University researchers, including Sergej Djuranovic, PhD, an associate professor of cell biology & physiology, will focus on studying hookworms, other collaborators will work to develop other helminth species as living factories, and still others will focus on lightweight, flexible materials to produce personal protective garments that are easier to wear than current PPE for long periods of time and are more protective against chemical and biological threats.