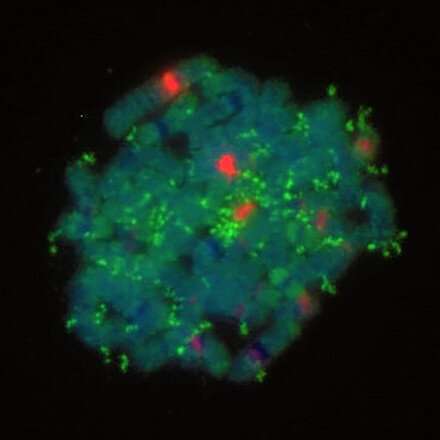 Cancer development is associated with the gradual accumulation of DNA defects over time. Thus, cancer is considered an age-related disease. But why do children develop cancer? An international team of researchers, led by Charité-Universitätsmedizin Berlin and the Memorial Sloan Kettering Cancer Center in New York now reveal that mysterious rings of DNA known as extrachromosomal circular DNA can contribute to cancer development in children. Producing the first detailed map of circular DNA, the scientists report new and unanticipated insights on longstanding questions in the field of cancer genetics. The work has been published in Nature Genetics.

Every year, nearly a half-million people in Germany develop cancer. Approximately 2,100 cancer patients are children under the age of 18. The fact that the majority of cancers develop in older adults is due to the mechanisms contributing to cancer development. A range of exogenous factors, including tobacco smoke and radiation can cause damage to cellular DNA. If this type of DNA damage is left to accumulate over many years, affected cells may lose control over cell division and growth resulting in cancer.

Children, however, are not old enough to be affected by this mechanism of cancer development. What, then, is the reason for childhood cancers? A team of researchers led by Dr. Anton Henssen of Charité’s Department of Pediatrics, Division of Oncology and Hematology and the Experimental and Clinical Research Center (ECRC) is a large step closer to finding an answer. Working alongside a team of scientists led by Dr. Richard Koche from the Memorial Sloan Kettering Cancer Center and other international partners, the researchers were able to show that rings of DNA can cause disruption of genetic information, which can contribute to cancer development.

Scientists have known about these ring-shaped sections of DNA for decades. They do not form part of the normal genetic information, which is stored in the form of chromosomes. Thus, they are referred to as extrachromosomal circular DNA. But scientists still know relatively little about their function, mainly because they have lacked technologies for a more detailed analysis of circular DNA. In their now published study, the researchers combined state-of-the-art sequencing techniques with pioneering bioinformatics algorithms to perform the first-ever detailed mapping of circular DNA in neuroblastoma, a deadly childhood tumor . Based on their findings, the researchers were able to draw important conclusions regarding the development of this type of cancer.

Working with colleagues from the Barcelona Supercomputing Center, the researchers analyzed neuroblastoma tissue samples from a total of 93 children. Their analysis revealed that the prevalence and diversity of circular DNA is far greater than previously anticipated. According to the findings, each tissue sample contained on average 5,000 circular DNA copies. DNA sequencing also revealed the process by which specific DNA sections separate from a chromosome to form circular DNA before reintegrating into the chromosome at a different location. “This can potentially cause cancer if it results in the original sequence of genetic information being disrupted,” explains the Emmy Noether Independent Junior Research Group’s leader,

Dr. Henssen, a researcher at the German Cancer Consortium (DKTK) in Berlin, says, “The detailed processes involved had not previously been elucidated in this manner and provide insight into how even young cells, like those found in children, can transform into cancer cells.”

“We were also able to show that certain types of circular DNA may accelerate neuroblastoma growth,” explains Dr. Koche. “Testing for their presence may therefore make it easier to predict the course of the disease. Additionally, studying this process in the relatively quiet genomes of these pediatric tumors may help illuminate similar mechanisms which were previously missed in more complex adult cancers. Given the recent interest in circular DNA in a variety of normal and disease contexts, the current study may have implications for a broad range of tumor types and associated clinical outcomes.”