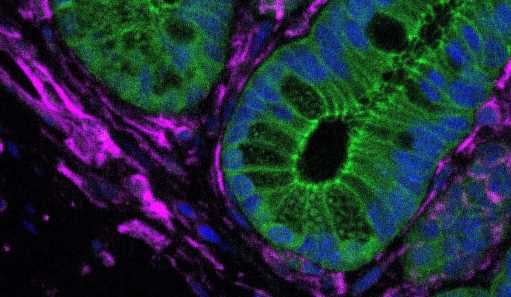 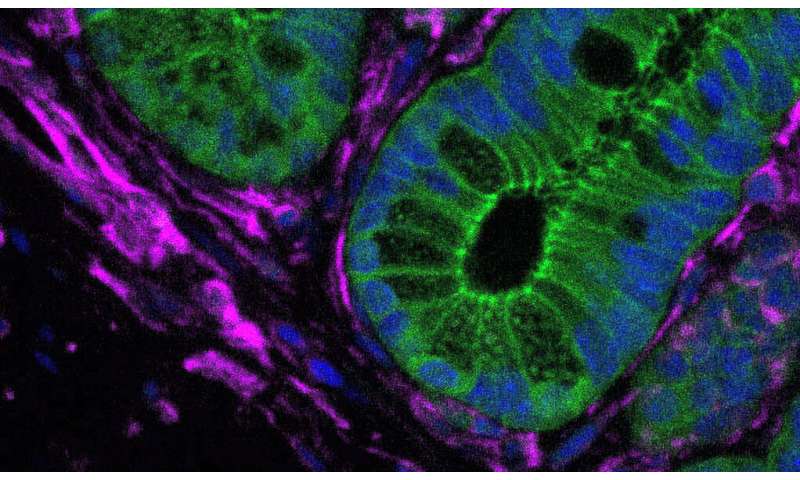 Colorectal cancer kills more than 50,000 people a year in the United States alone, but scientists have struggled to find the exact mechanisms that trigger the growth of tumors in the intestine.

Cancer researchers have zeroed in on a tightly sequestered group of stem cells within the intestine as suspects in the development of colon cancer but have been unable to explain exactly how genetic mutations within those stem cells can cause tumors of the digestive track.

Now scientists at Yale and collaborators in Greece have found that some unprepossessing neighbors of those stem cells actually harbor a molecular villain that can jump-start cancers of the colon, they report in the journal Nature.

The tightly packed group of stem cells within the intestine are surrounded by fibroblasts, which help form connective tissue and are one of the most common cell types in the body. Yale’s Manolis Roulis, associate research scientist in the lab of Richard Flavell, Sterling Professor of Immunobiology, found that a rare form of fibroblast expressing Cox-2 enzymes directs communication with intestinal stem cells. When they blocked signals from this fibroblast to intestinal stem cells in mice with colorectal cancer, tumors were reduced by 50%, they report.

Intriguingly, the authors said, this same communication is also blocked by aspirin and other anti-inflammatory drugs, which have previously been shown to have a protective effect against development of colorectal cancers.

“We also found that blocking this same cellular communication has a dramatic effect on the interactions of fibroblasts and stem cells in human systems we studied in the lab,” Roulis said.