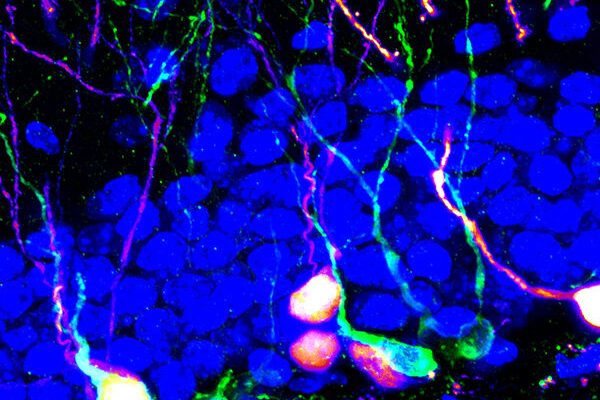 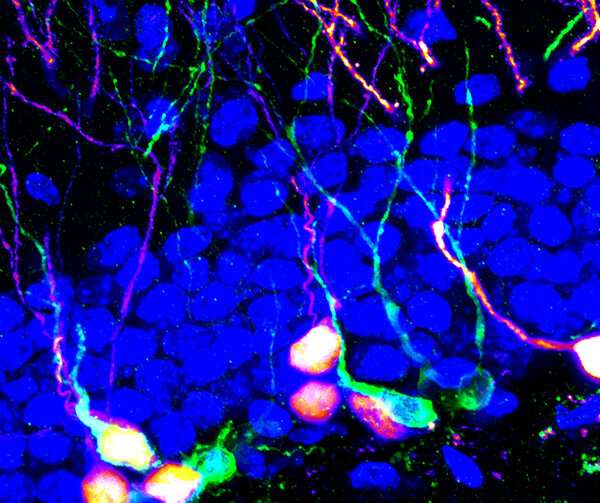 We humans lose mental acuity as an unfortunate side effect of aging. And for individuals with neurodegenerative conditions such as Alzheimer’s and Parkinson’s, the loss of cognitive function, often accompanied by mood disorders such as anxiety, is a harrowing experience. One way to push back against cognitive decline and anxiety would be to spur the creation of new neurons. For the first time, University of North Carolina School of Medicine scientists have targeted a specific kind of neuron in mice to increase the production of neural stem cells and spur on the creation of new adult neurons to affect behavior.

Targeting these cells, as reported in the journal Nature Neuroscience, modulated memory retrieval and altered anxiety-like behaviors in mice. Essentially, the UNC scientists boosted the electrical activity between cells in the hypothalamus and the hippocampus to create new neurons—an important process called neurogenesis.

Most neurons we carry for life were created before we were born and are organized during early childhood. But such neurogenesis continues into adulthood and throughout life. In fact, one of the reasons for cognitive decline and anxiety, and even diseases such as Alzheimer’s, is the suspension of neurogenesis.

Song, a member of the UNC Neuroscience Center, has been studying the detailed interplay between brain cells that keep neurogenesis chugging along. She knew that adult hippocampal neurogenesis plays a critical role in memory and emotion processing, and that neural circuit activity—think “electrical activity”—regulates this process in a constantly changing manner.

What no one knew was whether this neural circuit activity could be manipulated to spur neurogenesis to such a degree that the effect would be seen as a changed behavior, such as better memory or less anxiety.

To see the effect of modulating neural activity, the Song lab conducted experiments led by co-first authors Ya-Dong Li, Ph.D., and Yan-Jia Luo, Ph.D., both postdoctoral fellows. They used optogenetics—essentially a method using light to trigger neuronal activity—in a small brain structure called supramammillary nucleus (SuM). The SuM is located inside the hypothalamus region of the brain; it helps manage things from cognition to locomotion and sleep/wakefulness.

When Song’s researchers chronically stimulated the SuM neurons, they discovered a robust promotion of neurogenesis at multiple stages. They observed increased production of neural stem cells and the creation of new adult-born neurons with enhanced properties. Optogenetic stimulation of these new neurons then altered memory and anxiety-like behaviors.

“We also show that the SuM neurons are highly responsive when the mice experienced new things in their environment,” Song said. “In fact, in a new environment, mice require these cells for neurogenesis.”