Jonny Cruz had two problems: Facebook and a fear of “death by workout.” The 36-year-old- actor from West Hollywood, California, had started working as a creative producer with the social media giant, only to find that free meals and snacks at work were an irresistible temptation. “I have always had a lean frame, so I don’t look heavy or fat per se,” he says, but grazing all day had him taking in a lot of extra calories.

Meanwhile, he’d stopped really exercising. It all started when he tried to get back in the gym after slacking off for a few years. Suddenly he found that any strenuous exercise left him feeling dizzy. “I got really worried that I had something going on with my health but was too afraid to get it checked out,” he says.

That left him in a bind, adding more pounds while not getting the exercise he needed to burn calories. “To the naked eye you wouldn’t really think anything about my weight, but I could really feel it,” he says. Tired of feeling sluggish and dizzy, he finally talked to a cardiologist, who confirmed his heart was healthy. Cruz realized he’d created his own barriers to getting back in shape; he felt especially guilty for having a girlfriend who runs marathons while he worried a workout might kill him. At 158 pounds, his body fat percentage was 19.24 percent.

His doctor told him that his dizziness would likely subside as he exercised. So Cruz threw himself into a six-week transformation at Ultimate Performance. His initial assessment rolled right into a workout—“It was great ‘cause I didn’t have time to freak out,” he says. He felt on the brink of dizziness, but as he kept going the feeling disappeared. Soon he was training without fear. 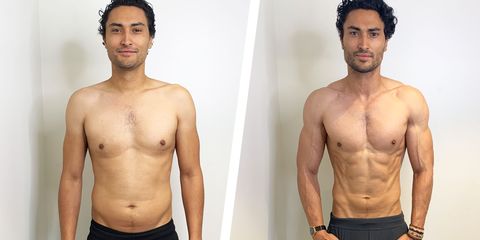 To fix his diet, he switched to a macro eating plan, logging all of his intake in MyFitnessPal. He’d never done that before, and soon learned the value of tracking fats, carbs, and protein. It was a challenge, but he realized how important it was to know exactly what he was eating. He even signed up with a service called MacroPlate, which delivered meals designed to fit his plan.

Along the way, he un-learned some bad habits, including form that hadn’t been serving him well. “It was a lot of pain, but very rewarding to see how much more weight or reps I was doing each week,” he says.

Within two weeks he could pinch his fat and notice it felt looser. In six weeks he lost nine pounds and dropped his body fat to just over 10 percent, giving him a super-cut look. “I was amazed at how much muscle I gained,” he says. “I didn’t think I would get lean and build muscle the way I did.” He’s now bulking up, especially focusing on his legs.

For him, the transformation was all about diving in. “Make a full commitment to what you want to achieve,” he says. Find an environment that supports your dedication and keeps you accountable. “The accountability will keep you grounded in the beginning, helping you shape a new habit.”