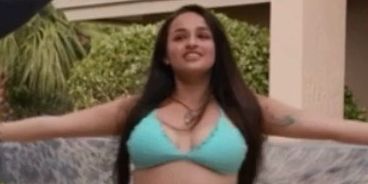 Jazz Jennings is strutting her stuff. The reality star and LGBTQ+ activist showed off her bikini bod on Instagram this week, promoting a message of body positivity.

In the photos, Jazz is wearing a bright turquoise bikini and has a big smile on her face. Not to mention she struts along in the video with all kinds of confidence. She whips around her scarf and strikes multiple power poses all in her bikini.

The scars from her gender confirmation surgeries are also visible on her upper thighs, but she doesn’t highlight them. Nope, this video is all about confidence. She wrote in the caption: “Confidence is key 🔑 Strutting into a new episode of #IamJazz like… 💕”

Her fans are Here. For. It. One wrote: “Omg you’re just too precious for this world ❤️❤️” Another fan added: “QUEEN 👑” And a follower wrote: “You look so beautiful 😍” Other followers typed out longer messages to show support and gratitude to Jazz: “I’m 36, and view you as a role model! What wonderful messages you send out there and I’m happy my daughter gets to grow up in a world with people like you. ❤️”

ICYMI Jazz went through her initial gender confirmation surgery in June 2018. Doctors had to use a new technique because she started using hormones at such a young age. Since she hadn’t developed enough tissue to construct a vagina, Jazz’s doctors used tissue from her stomach lining.

“They’re using the tissue I have, the peritoneum, and also, they may take a skin graft as well. I say it’s going to be like a patchwork vagina, Franken-vagina,” she told Nightline. “So yeah, as long as it’s functional, that’s all that matters.” Since then, she’s had two follow-up surgeries.

Jazz came out as transgender at age 5 and has been sharing her transition in the TLC series I Am Jazz and on her Youtube channel. FYI: Gender confirmation surgery gives “transgender individuals the physical appearance and functional abilities of the gender they know themselves to be,” according to the American Society of Plastic Surgeons (ASPS).

For a male-to-female transition, that may include facial surgery, top surgery (for the breasts) and/or bottom surgery, to reconstruct male genitalia to female genitalia. In 2016, 3,200 gender reassignment surgeries were performed in the US, an increase of 20 percent from the previous year, says ASPS data.