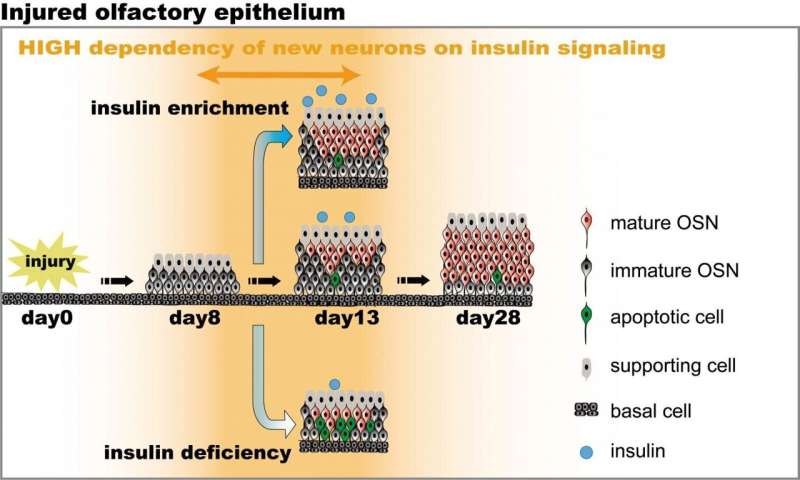 Researchers have known for some time that insulin plays a vital role in regeneration and growth in some types of neurons that relay environmental sensory information to our brains, such as sight. However, they know relatively little about the role of insulin in the sense of smell. Now, investigators at the Monell Chemical Senses Center have shown that insulin plays a critical role in the maturation, after injury, of immature olfactory sensory neurons (OSNs). The team published their findings in eNeuro earlier this month.

“Our findings suggest that applying insulin into the nasal passage could be developed as a therapy for injury caused by a host of issues,” said first author Akihito Kuboki, MD, a postdoctoral fellow in the lab of Johannes Reisert, Ph.D.

Knowing that insulin is part of the body’s repair pathway for visual neurons, Kuboki suspected that the hormone might also play a role in the maturation of OSNs after injury. He also notes there are many insulin receptors in the olfactory region of the brain. Taking these factors into account, Kuboki concluded that insulin may also be involved in the sense of smell.

“Although scientists don’t yet have a clear idea of how it works, we know that insulin plays a key role in preventing cell death,” said Kuboki. “If insulin levels are reduced, diabetes patients have a high susceptibility to cell death, which can cause smell loss.” He is pursuing this research path to shed light on why people with diabetes often suffer from smell loss, or anosmia.

The research team induced diabetes type 1 in mice to reduce levels of circulating insulin reaching the OSNs. The reduced insulin interfered with the regeneration of OSNs, resulting in an impaired sense of smell. They analyzed how the structure of the olfactory tissue in the nasal cavity and the olfactory bulb is impaired by comparing the number of mature OSNs and how well the axons of OSNs reached the olfactory bulb. The team also recorded odorant-induced responses in the OSNs in the nasal cavity. An odor-guided behavioral task, in which the mice needed to find a cookie reward depending on their ability to smell, measured olfactory function.

In addition, the team injured OSNs, which have a unique ability to regenerate in mammals. This approach allowed the investigators to ask whether OSNs required insulin to regenerate, which they found to be true. What’s more, they discovered that OSNs are highly susceptible to insulin deprivation-induced cell death eight to 13 days after an injury. This time window indicates that during a critical stage newly generated OSNs are dependent on insulin. They also found that insulin must be applied to regenerating OSNs at this critical time point in the neurons’ growth to be able to restore a mouse’s sense of smell.