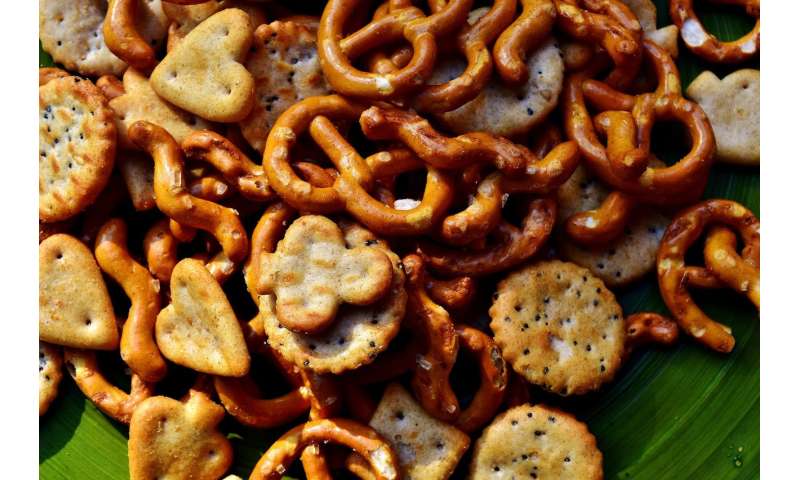 Image-and-text health warning labels, similar to those on cigarette boxes, show potential for reducing the consumption of alcoholic drinks and energy-dense snacks, such as chocolate bars, according to a study published in the open access journal BMC Public Health.

Health warning labels (HWLs) using images and text to depict the negative health consequences of smoking have been found to be effective and acceptable for changing smoking-related outcomes. However, evidence for the potential usefulness of HWLs for reducing the consumption of alcoholic drinks and energy-dense foods like chocolate bars or crisps, is limited.

A team of researchers at the Universities of Cambridge and Bristol, UK conducted two online studies with separate participants, asking them to rate different image-and-text HWLs on alcoholic drinks (5,528 participants) or energy-dense snacks (4,618 participants).

Dr. Gareth Hollands, the corresponding author said: “To our knowledge, these are the first large-scale studies in general populations to examine the potential effectiveness and acceptability of image-and-text health warning labels on alcohol and on snack foods. Prior research in this area has typically either looked at these warning labels on sugary drinks, or used smaller or less representative samples.”

The authors found that HWLs on alcoholic drinks depicting bowel cancer, followed by those depicting liver cancer were associated with the highest level of negative emotions—such as fear, disgust, discomfort and worry—and the lowest desire to consume the product. They were also considered the least acceptable for use by the study participants. In general, few of the alcohol HWLs were considered acceptable, with only three out of 21 rated at least somewhat acceptable.

HWLs on high-density snacks depicting bowel cancer, followed by those depicting non-specific cancer were associated with the highest level of negative emotions and lowest desire to consume the product, with those depicting bowel cancer considered to be the least acceptable. HWLs on energy-dense snacks were judged on average more acceptable than those on alcohol, with 13 out of 18 snack HWLs rated as at least somewhat acceptable.

The authors suggest that the response to labels depicting bowel cancer HWLs may indicate those that have the greatest potential for reducing alcohol and snack food selection and consumption.

Gareth Hollands said: “The finding that health warning labels may be judged to be relatively more acceptable to use on snack foods, than on alcohol, could be due to heightened public awareness of the health consequences of excess energy intake and obesity, particularly in children. In general, however, many of the participants expressed negative views of the possible use of such labels.”

Participants for the alcohol study were sampled from the UK population if they self-reported consuming either beer or wine at least once a week. A total of 5528 people were shown an image of a bottle of beer or wine labelled with one of 21 possible HWLs illustrating the adverse health consequences of alcohol consumption. Participants were asked how afraid, worried, uncomfortable or disgusted the label made them feel, to rate their desire to consume the product, and how strongly they supported putting the label on alcoholic drinks.

For the food study participants were sampled from the UK population if they self-reported that they consumed biscuits, cake, crisps or chocolate at least once a week, and liked chocolate. A total of 4618 people were shown an image of a chocolate bar labelled with one of 18possible HWLs illustrating the adverse health consequences of obesity and related conditions, caused by excess calorie consumption.