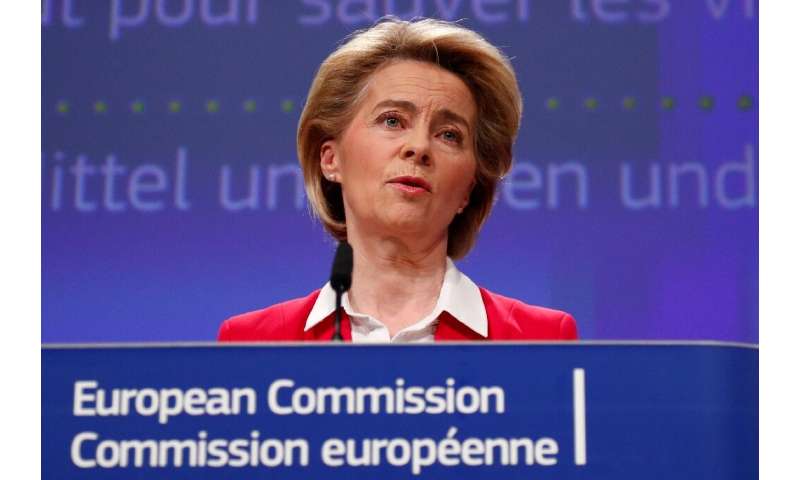 The European Commission will on Wednesday consider how to craft a plan to ease the bloc out of a virus lockdown that has dealt a body blow to the economies of EU members.

Commission president Ursula von der Leyen will hold an “orientation debate” with commissioners by videoconference, after some EU countries announced they were already planning to relax measures.

Both Austria and Denmark have said they will start phasing out restrictions from next week, while still keeping social-distancing rules and frequent hand washing instructions in place.

Initially, a commission spokesman announced the meeting would set out guidelines for a bloc-wide strategy.

But, just hours later, this was downgraded in a terse statement to become a debate on a “roadmap to exit the restrictive measures”, amid concern about sending mixed messages about the pandemic.

“The timing is delicate because member states are at different stages of the pandemic,” a European source told AFP.

“The commission doesn’t want to risk sending a signal of relaxing (restrictions) which could be misunderstood by some member states. Better to wait until after Easter.”

Earlier, spokesman Eric Mamer said the commission felt it was important that EU countries lift their lockdown rules in a coordinated way.

The early days of the crisis in Europe were marked by some countries taking unilateral measures, including banning the export of medical equipment even within the bloc, before Brussels intervened.

Later this month the EU’s national leaders will hold a video conference on the pandemic.

Mamer said Austria and Denmark had informed the Commission and all member states of their decisions.

“We understand that these strategies are very gradual will be implemented step-by-step, which is indeed one important element that we will certainly be highlighting as well,” he said.

The European Union and neighbouring countries including Britain and Norway have recorded more than 600,000 cases of COVID-19, according to the European Centre for Disease Prevention and Control.

Officials have reported more than 51,000 deaths, most of them in Italy and Spain.

Lockdowns have been introduced to varying degrees across the bloc, ranging from enforced stay-at-home orders in places like northern Italy to far less restrictive advice in Sweden, where people have been allowed to gather in small numbers and freely move about.

The European Commission has struggled to arrange a common EU approach, reflecting its lack of say over member states’ health and policing policies.

But it has managed to soften some strict border measures by states such as Austria and Poland that for a time badly crimped the flow of road freight.

EU leaders are becoming increasingly alarmed at the economic damage wreaked by the lockdowns. France has warned it is facing the deepest recession since the end of World War II.

At the leaders’ last video conference on March 10, one participant said: “We have just slid into lockdown. We really need to find a way to get out of it.”