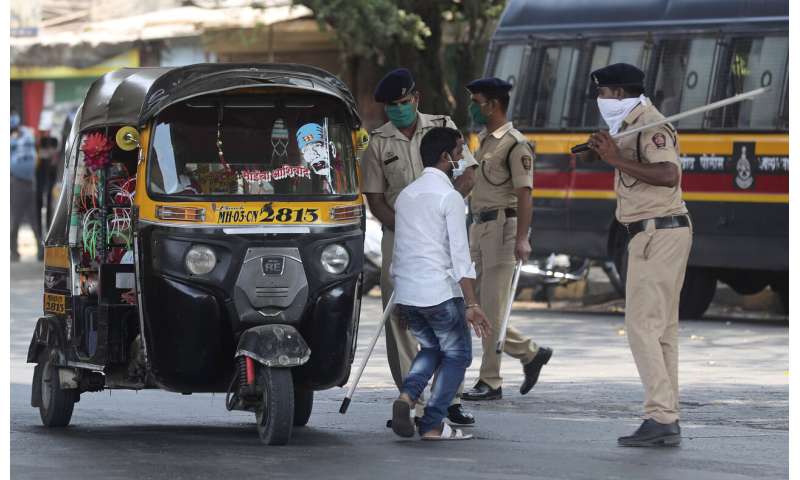 Indians struggled to comply with the world’s largest coronavirus lockdown on Wednesday as the government began the gargantuan task of keeping 1.3 billion people indoors.

Official assurances that essentials wouldn’t run out clashed with people’s fears that the disease toll could soon worsen, gutting food and other critical supplies.

In five days, the number of confirmed cases of COVID-19, the disease caused by the coronavirus, has jumped from about 200 to 519, and experts say the real toll is likely to be much higher because of insufficient testing.

On Tuesday, Prime Minister Narendra Modi announced a three-week countrywide lockdown covering nearly one-fifth of the world’s population “to save India and Indians.”

He said the lockdown would be “total,” but officials after his speech released advisories explaining that medical, law enforcement, media and other sectors were exempted and that stores selling food and other essentials would remain open.

Still, Modi’s speech triggered panic buying as online retailers Amazon and Big Basket, an Indian grocery delivery service, began canceling previously placed orders and said they had no delivery slots available. That spurred people to risk fines and other penalties for violating the lockdown by going out to shop at local stores. 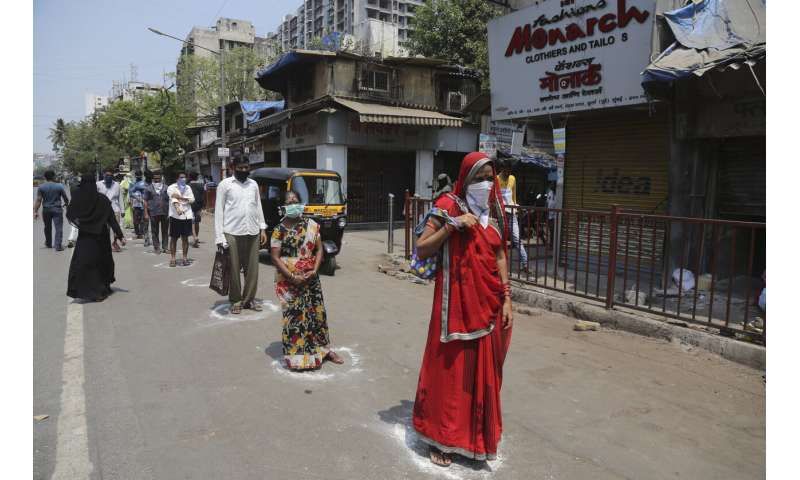 Social distancing was forgotten at a grocery store in the Nizamuddin neighborhood of New Delhi as panicked residents swarmed inside and jostled with each other to get fast-disappearing supplies.

An elderly couple who waited to enter the shop for nearly 30 minutes eventually returned home empty-handed.

Although the lockdown made provisions for people to leave their homes to buy food, TV news and social media showed police striking would-be shoppers in the streets with batons in the southern state of Kerala, the financial hub of Mumbai and New Delhi.

Alok Barman, a servant who works in several well-to-do south Delhi households, said he was beaten up by police when he ventured outside his home in the city’s outskirts.

“Some homes that I work in paid me some money and I thought it was best to get some food in the house. But the police attacked us with sticks and beat us,” he said. “Now we have nothing to eat.”

Tarique Anwar, a former banker, said he went out to buy milk and vegetables at a grocery store in Delhi’s Jamia Nagar neighborhood when he was confronted by a group of policemen who ordered him to go back. He only managed to get vegetables. 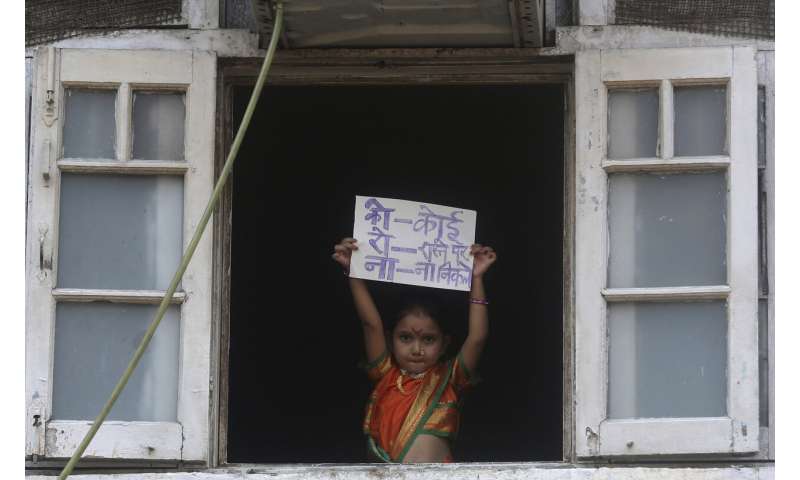 A video shot by a passerby showed a policeman using his baton to smash the interior of a meat shop in the capital’s Zakir Nagar neighborhood. The shop’s owner said police also beat him up and told him he shouldn’t have opened his shop.

“They charged inside and started abusing and beating me,” said Parvez, who uses only one name.

Similar scenes occurred in India’s northeast, an eight-state region where only two of the country’s COVID-19 cases have been reported.

Others defied the shutdown order not to shop but to pray.

Wednesday was the start of the Hindu new year according to an ancient lunar calendar and the beginning of a nine-day holiday in which Hindus normally perform daily rituals at temples. The lockdown order, however, bans religious gatherings and instructs places of worship to close. 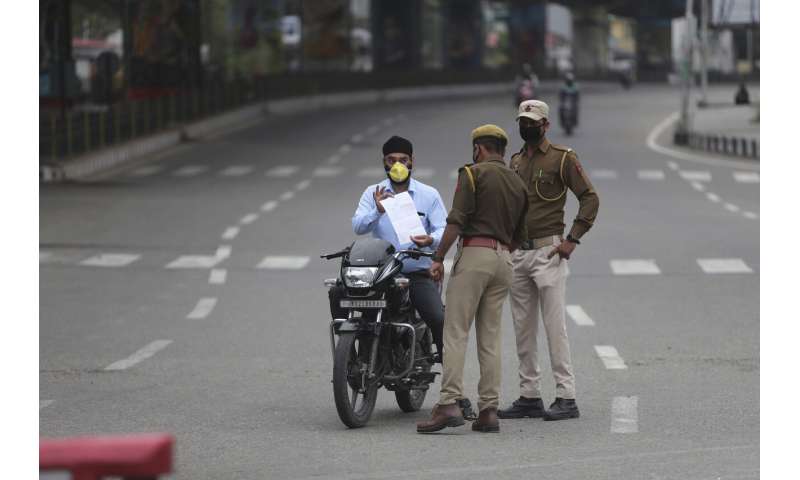 Modi acknowledged in a tweet that “The celebrations will not be like they are usually but they will strengthen our resolve to overcome our circumstances.”

“May we all come together to win the important battle that the nation faces against COVID-19,” he said.

Some Indians, including a member of Modi’s Hindu nationalist Bharatiya Janata Party, defied the lockdown order, which also bans public gatherings of five or more, and attended temple ceremonies.

Yogi Adityanath, the chief minister of India’s most populous state, Uttar Pradesh, prayed to a statue of Lord Ram at a makeshift temple in Ayodhya with about 100 other people.

Even as Adityanath ventured outside, Awanish Awasthi, an Uttar Pradesh government spokesman, told reporters in Lucknow that the lockdown was being strictly enforced in the state. He said cases had brought against 5,590 people for violating orders to stay at home, but denied allegations of police excesses. 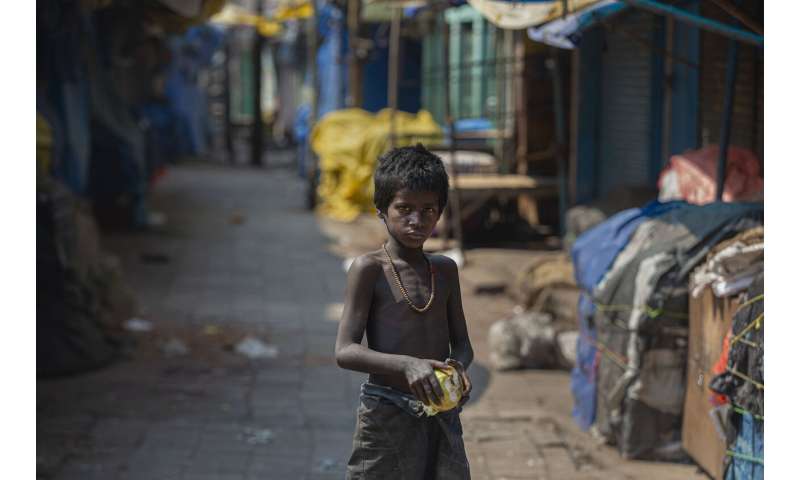 Meanwhile, medical personnel and airline crews complained that they faced discrimination from landlords and neighbors afraid they might transmit the virus.

State-run carrier Air India issued a statement appealing “to all, particularly the law enforcement agencies to ensure that Air India crew are treated with respect and freedom that every citizen deserves, especially those who have been discharging their duties in selfless manner for return of fellow Indians.”

A health ministry statement on Tuesday said multiple complaints had been received from doctors, paramedics and other health workers in New Delhi that their landlords were forcing them to leave their houses or apartments.