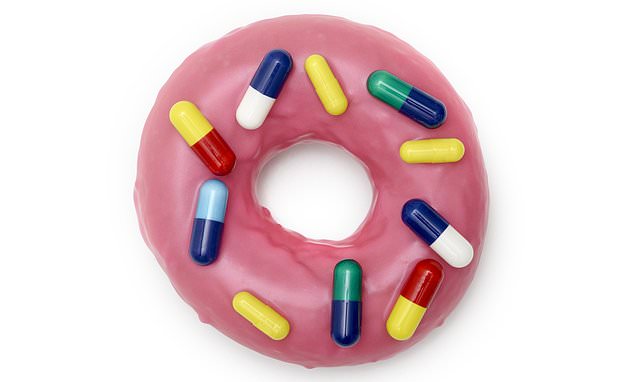 Does taking medication encourage an unhealthy lifestyle? Patients often use drugs as an excuse to continue bad habits, study suggests

As a nation, we take a lot of pills. One in four people in England take at least three different types of medication daily, according to NHS Digital.

The two most commonly prescribed medicines are blood pressure pills and cholesterol-lowering statins — for which there are seven million prescriptions alone every year in the UK. But research has uncovered a worrying trend.

Many people are using their pills to continue bad habits that may contribute to high blood pressure and cholesterol, rather than improving their diet or increasing their exercise levels. Both conditions are risk factors for strokes and heart disease.

Published in the Journal of the American Heart Association, the report found people classed as at risk of heart attack or stroke who took blood pressure or cholesterol medication were more likely to gain weight and exercise less compared to those not on medication. 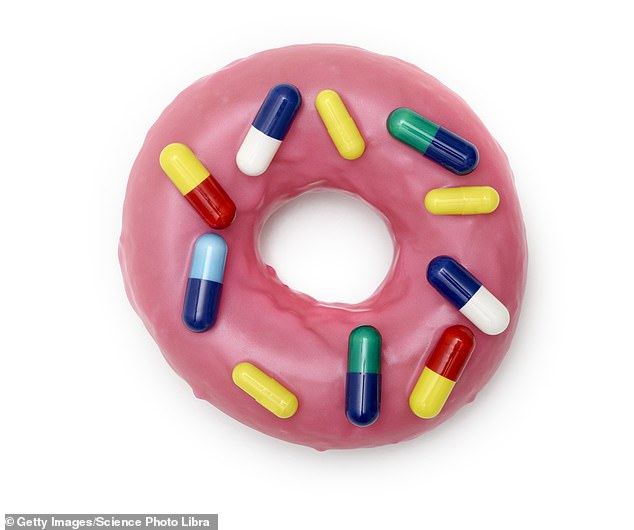 Research has found that many people are using their pills to continue bad habits rather than improve their diet or increase their exercise levels. (Stock image) 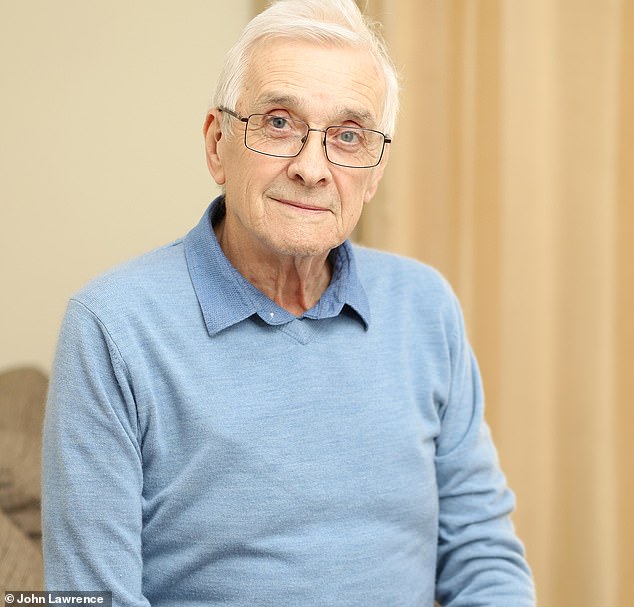 Malcolm McGregor, a retired broadcast engineer, 77, who lives in Newbury, Berkshire, has lost most sight in one eye and needs a wheelchair to travel any great distance

The study tracked 40,000 people over 13 years and found that, of those taking pills for blood pressure and statins for high cholesterol, 8 per cent were more likely to have become physically inactive than those not taking anything.

The pill-takers were also 82 per cent more likely to have become obese or have an increased body mass index.

‘Medication shouldn’t be viewed as a free pass to continue or start an unhealthy lifestyle,’ says study leader Dr Maarit Korhonen, a senior researcher at the University of Turku in Finland.

‘People starting on medications should be encouraged to continue or start managing their weight, be physically active, manage alcohol consumption and quit smoking.’

The consequences of the ‘free pass’ approach can be devastating.

Malcolm McGregor has lost most sight in one eye and needs a wheelchair to travel any great distance because, he says, he thought his daily medication — metformin and gliclazide for type 2 diabetes, cholesterol-lowering statins, blood pressure pills and aspirin — would make up for his unhealthy lifestyle.

The retired broadcast engineer, 77, who lives in Newbury, Berkshire, with his wife Susan, 71, says: ‘I had been on so many pills for years.

‘It started with a prescription for daily statins and aspirin after I had a heart attack in my mid-40s. I’d had a stent to unblock an artery and I thought the procedure and the drugs would be enough to stop my arteries getting blocked again and keep my heart healthy. 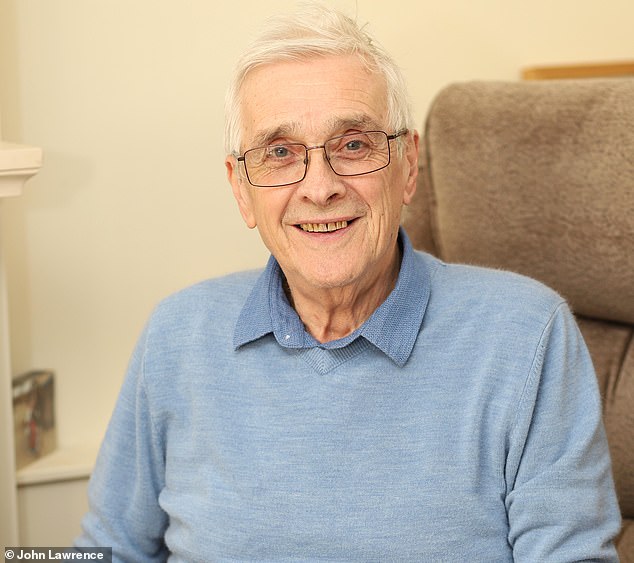 Mr McGregor says, he thought his daily medication — metformin and gliclazide for type 2 diabetes, cholesterol-lowering statins, blood pressure pills and aspirin — would make up for his unhealthy lifestyle

‘I did give up smoking, but I had a really unhealthy lifestyle that I did nothing to change.’

He worked long hours and grabbed fast food ‘often at 2am, mainly curries and Chinese takeaways. While I was on my feet a lot at work, I took no formal exercise.’

At that time Malcolm weighed 18st, which, at just under 6ft tall, meant that he was classified as ‘obese’. ‘Instead of seeing the heart attack as a wake-up call, I just carried on as before,’ he says. ‘I had my head in the sand.’

Within a few years, he was also prescribed medication for high blood pressure, and in his early 60s was diagnosed with type 2 diabetes and given metformin to help control his blood sugar levels.

‘I thought the pills would be enough to deal with the problem,’ he says. ‘I didn’t realise that I was putting myself at risk of complications as my blood sugar was still uncontrolled and very high, mainly because of my poor diet choices and lack of exercise. 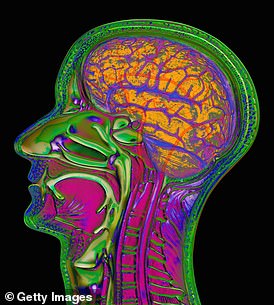 Sitting for long periods of time can reduce blood flow to the brain, researchers claim

This week: Your brain

Mentally demanding office work is good for your brain. But spend too long sitting and you’ll counteract some of this.

‘Researchers at Liverpool John Moores University found evidence that sitting for long periods of time can reduce blood flow to the brain,’ he explains.

‘That can slow brain functioning and increase the likelihood of developing neurological disorders such as dementia.’

Malcolm’s HbA1c reading (his average blood glucose levels over three months) was ‘sky high at 59’ (a good reading is below 43).

And his health problems escalated until in 2018, he was diagnosed with diabetic neuropathy — nerve damage — in his feet, and diabetic retinopathy, sight loss due to high blood sugar.

‘I lost 90 per cent of my sight in one eye and 60 per cent in the other eye, and developed such nerve damage that I couldn’t feel my feet, so couldn’t walk properly and had to rely on a wheelchair,’ says Malcolm.

‘This was crunch time when it finally hit me that taking pills was not enough, and I needed to change my lifestyle.

‘I regretted not changing my bad habits earlier.’

Malcolm then heard about a Warwick University research project into how a low-carbohydrate diet could help those with type 2 diabetes. He signed up for an online programme of dietary advice, which involved restricting his carbohydrate intake to 30g a day.

While this is proof that lifestyle changes can transform health, Malcolm has been left with long-term problems. ‘I need a walking frame or wheelchair if I’m going more than 50 yards,’ he says.

‘My eyesight is permanently damaged, too, and I can’t read a book without a magnifying glass. Had I changed my lifestyle earlier I might have avoided this.’

Mike Dixon, a GP in Cullompton, Devon, is chair of the College of Medicine, a group of doctors who champion lifestyle change and advocate ‘social prescription’ over pills and medical procedures.

He says it’s all too easy for patients and doctors to rely solely on pills for reducing blood pressure, cholesterol and blood sugar levels.

‘Every day we’ll see patients in general practice who are overweight with these health problems, but who continue smoking, eating an unhealthy diet and taking no exercise,’ he says.

‘Too often the temptation when someone comes in with these is to prescribe pills without offering diet and lifestyle advice.

Do I really need?

Some people find tying laces tough. For example, after a hip replacement patients cannot bend and are told to replace shoelaces with elastic ones.

In this Easy Lace pack, you get 20 elastic laces of different lengths.

Thread ends through like usual laces — but these are secured individually into each eyelet.

Once attached, they do not need repeated tying. So rather than having to bend forward and do up the shoes each time, just slip your foot into them and the laces will stretch to allow this.

EXPERT VERDICT: Helen Rushton, of the Royal College of Occupational Therapists, says: ‘Elastic laces are great for those who’ve had major surgery.

‘These ones are separate ‘straps’ which go from one hole to the opposite one, then clip into the hole. So it’s key to make sure they’re the right size, or they’ll not stretch enough or stretch too much.’

‘But changing diet and lifestyle is arguably as important if not more so. Sometimes there just isn’t time to try as hard as we’d like.

‘We know the pills work quickly — and our payment system is geared to getting patients to certain targets, so there is an incentive to prescribe instead.’

He says this is changing with the introduction of social prescribing — where GPs offer help to bring about lifestyle change, such as through classes on shopping for, and cooking with, healthy food.

‘These initiatives do work. In my own practice, we offered these to patients with type 2 diabetes and pre-diabetes.

‘A third put their condition into remission.’

Dr William Bird, a GP in Reading, adds: ‘When you prescribe pills, some people feel they don’t have to take responsibility for their health, and once they’re on the pills it’s quite difficult to persuade them to come off them.’

Just telling patients to shed pounds, for example, has limited benefit. ‘Telling someone who is stressed and overweight to lose weight is as much use as a chocolate teapot,’ says Dr Bird.

‘We have to explain why physical activity can benefit health and how medication such as blood pressure pills can only do a fraction of what physical fitness can.

‘Being physically inactive means you have more visceral fat [around the organs], the most dangerous type of fat that creates inflammation in the body — including brain, arteries and lungs.

‘But when you become active visceral fat and associated inflammation decreases and hopefully weight loss and other improvements in health will follow.’

He says for some patients just taking a 20-30 minute daily walk could turn around their health.

‘It’s getting physically active that will reduce stress and inflammation in the body. Stress actually causes us to eat more, drink more and smoke.’

Malcolm is one of many who now regrets that he did not take lifestyle issues more seriously.

‘I just wish I’d seen the light earlier,’ he says. ‘Pills on their own are not enough.’