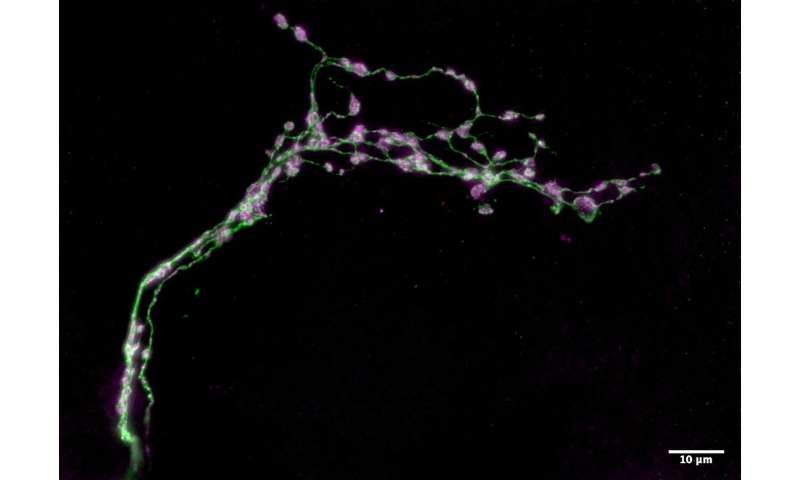 A newly published study in Current Biology reveals surprising findings about the function of circadian network neurons that undergo daily structural change. The research could lead to a better understanding of how to address circadian rhythm disruptions in humans and facilitate preventing a host of associated health problems, including increased risk for cancer and metabolic syndrome.

Circadian networks are collections of neurons that serve as master body clocks in all animals, helping them know when to sleep and when to be productive. Scientists have long studied the circadian networks of the Drosophila melanogaster (better known as the fruit fly) to gain insight into how the human body clock operates. Recently, investigators at the Advanced Science Research Center at The Graduate Center, CUNY (CUNY ASRC) and Barnard College examined the function of small regions of important neuronal clocks in the fly’s brain. Some segments of the neurons in these regions undergo daily remodeling, displaying a highly branched structure at the beginning of the day and a simpler structure at the beginning of the night. Scientists previously believed that these segments—called the dorsal medial termini—served a critical output function, sending signals that tell the fruit fly’s brain what time of day it is. But the research team discovered that they actually serve in an input capacity, receiving cues from the external environment about the time of day.

“The circadian network shapes the timing of sleep and activity through two key mechanisms: an endogenous clock, which runs on a cycle that is slightly longer or shorter than the Earth’s 24-hour solar day; and the process of entrainment, which adjusts the endogenous clock every day to keep it in sync with the solar day,” said Orie Shafer, a professor with the CUNY ASRC Neuroscience Initiative and the study’s co-senior investigator. “For years, the field has assumed that the dorsal medial termini would be required for a strong endogenous clock. But when we tested this prediction in flies in which the formation of these segments was prevented, we found the flies’ clocks were absolutely fine but that they had a difficult time synchronizing them to the rising and falling of environmental temperatures.”

For their study, researchers bred fruit flies with undeveloped dorsal medial termini segments that completely lacked the structures that normally change throughout the day. The flies were then examined to see if this manipulation had effects on circadian timekeeping. Remarkably, the manipulated flies displayed completely normal circadian rhythms in sleep and activity. Given this surprising result, the researchers then asked if the loss of the dorsal medial termini segment might prevent the normal synchronization of the clock with daily changes environmental cues. The researchers observed that fruit flies lacking dorsal termini were unable to properly synchronize their sleep/activity rhythms to daily temperature cycles. Previous research has shown that temperature changes play a role in regulating circadian rhythms. These new findings strongly suggest that dorsal medial termini neurons likely input (receive) signals from regions of the brain that track environmental temperature.

“I have been curious for some time to know whether the structural plasticity that I characterized in clock neurons as a part of my graduate student work was an output mechanism for the clock to connect with downstream targets,” said the study’s first and co-senior author Maria Fernández, an assistant professor in the Department of Neuroscience and Behavior at Barnard College. “We were surprised to see that this site of plasticity seems to be involved in input, rather than output, pathways.”