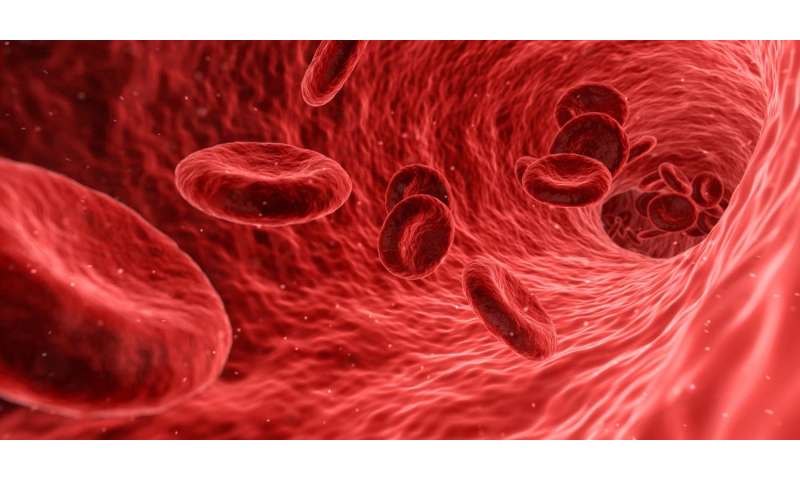 A recent study by a team of University at Buffalo researchers has found a link between fats in the blood and problems with the arteries in people with multiple sclerosis (MS).

The purpose of the study, which was published online ahead of print in the Journal of Vascular Research, was to determine the effect of a person’s blood lipids on the major arteries outside the skull.

In addition to previous work that demonstrated associations between hyperlipidemia, which is an abnormally high concentration of fats—or lipids—in the blood and worse clinical and radiological outcomes in people with MS, this study showed a link between hyperlipidemia and greater problems with the extracranial arteries.

“This study provides another research avenue that may supplement previous findings published by our comprehensive MS group, including hyperlipidemia effects on disability progression, greater brain lesion formation and greater brain atrophy,” said Dejan Jakimovski, MD, a doctoral candidate in the Department of Neurology in the Jacobs School of Medicine and Biomedical Sciences at UB, who was the lead author of the study.

MS is an unpredictable, chronic illness involving the central nervous system. In MS, the immune system attacks the myelin, which is the protective layer around nerve fibers. This causes inflammation and scar tissue, or lesions. This can disrupt the flow of information with the brain, and between the brain and body.

During the study, researchers used non-contrast magnetic resonance angiography (MRA), a type of magnetic resonance imaging (MRI) that looks specifically at the body’s blood vessels. MRA is used to generate images of arteries in order to evaluate them for stenosis, or narrowing; occlusions, or blockage; aneurysms, an excessive enlargement of an artery caused by a weakening of the artery walls; or other abnormalities.

The researchers performed MRAs on 104 people with MS and 41 healthy control subjects. The cross-sectional area of the common carotid artery and vertebral artery (the two major arteries in the neck) was measured using a semi-automated edge-detection/contouring method at the C4-C7 vertebrae in the subjects’ cervical spines. The lipid profile was obtained at the time of the scan. Repeated measures analyses that adjusted for age, gender and body mass index were used.

After the MRAs were completed, researchers found a significant association with a moderate effect of age on the size of the arteries in people with MS. They also found that lipoprotein (a)—a highly atherosclerotic lipid—had a strong effect on the vertebral arteries. These associations were not present in healthy control subjects.

Those people with MS who were in the highest lipoprotein (a) quartile had significantly larger common carotid and vertebral arteries when compared to those with lower lipoprotein threshold values.

Although the clinical and pathological significance of these associations remains unknown, “the effect of lipoprotein (a) on the extracranial arterial vasculature is potentially another mechanism of action by which lipids and hyperlipidemia may interact with the complex MS pathophysiology,” said Jakimovski.

The study was conducted on MS patients who were recruited in the period of 2015 through 2018 at the Buffalo Neuroimaging Analysis Center (BNAC) in the Department of Neurology at the Jacobs School.