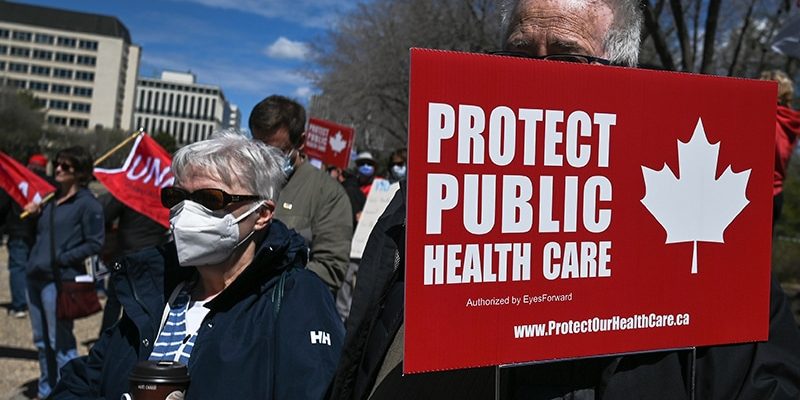 Threats, harassment, bullying, and beating of physicians and healthcare workers in Canada have escalated since the start of the pandemic. About 78% of physicians have such experiences where they work or train.

Yet the attacks persist. On October 13, a 58-year-old man was arrested under the amended law for harassing Ottawa family physician Nili Kaplan-Myrth, MD. “He phoned my office multiple times, called me a f—ing [antisemitic and misogynist slurs], and threatened me,” she told Medscape Medical News.

Kaplan-Myrth has endured harassment, including death threats, many times during the past few years, in part, she says, because she has advocated in the media for public health measures against COVID-19. Many of those who harass her are opposed to lockdowns and vaccination. Often, the abuse is antisemitic and sexist.

“We went from being heroes — which we never should have been, because we’re just doing our jobs — to being villainized,” she said.

According to the Ontario Medical Association (OMA), there has been an “alarming increase” in such attacks during the pandemic. “The OMA strongly condemned the attacks and began a public awareness and media campaign in the spring of 2021, including a series of public statements,” OMA President Rose Zacharias, MD, told Medscape Medical News.

One such statement was an op-ed in the Globe and Mail by OMA CEO Allan O’Dette, who gave several examples of harassment. He wrote that Lawrence Loh, MD, the Peel region’s medical officer of health, had reported that his email box is filled with “a torrent of hatred every single day.” One such email reads, “Greetings, Dr Loh. You are a sad excuse of a person and I want nothing but pain and suffering for you. The same pain and suffering you have caused the citizens of this region. I hope I never run into you in person. F— you.”

Mustafa Hirji, MD, the chief medical officer of the Niagara region, announced a lockdown in that area in February. O’Dette wrote that “opponents called for his firing, arrest, and assault — even his beheading. ‘Let’s put his head on a stick,’ read one Facebook post. The messages were so threatening that police launched an investigation into them.”

At that point, Zacharias said, “we issued joint statements with the Registered Nurses Association of Ontario and the Canadian Medical Association calling for safe zones around hospitals to protect health-care workers and patients.” Some Canadian provinces are creating such “bubble zones,” and others are in the process of creating them.

Frontline hospital workers, mostly women, are frequent targets of violence. The Ontario Council of Hospital Unions (OCHU) and the Canadian Union of Public Employees (CUPE) recently released data from a July poll of 2307 of its members from Toronto, Ottawa/Eastern Ontario, Hamilton, the Southwest, and Central and Northern Ontario.

“The sobering reality is that hospitals are increasingly toxic and dangerous workplaces where women are beaten, sexually assaulted, and racially attacked by the hundreds every single day,” said Sharon Richer, secretary-treasurer of CUPE’s OCHU, in a press release.

She told Medscape that Ontario is particularly affected because of staffing shortages, which generate frustration and anger among patients and families. “Ontario hospitals have the fewest staff and beds to population of any developed economy,” she said.

“We’ve asked on numerous occasions for a zero-tolerance policy [toward harassment], and while some hospitals have it, there’s no one to back it up or put teeth into it, so it ends up being just words on a piece of paper,” she said. “We’ve asked for funding to increase staff and beds to get people out of the hallways, but so far, these requests have largely fallen on deaf ears.

“We also need whistleblower protection, which is something we’re working on with the New Democratic Party right now,” she added. “That’s because hospital workers are afraid to speak out about abuse. No one wants to talk about it, but it needs to be talked about so we can fix it.”

Kaplan-Myrth says that her colleagues in the United States, the United Kingdom, and Australia also have been facing intimidation. Indeed, a survey of 321 researchers that was published in Nature revealed that more than two thirds had negative experiences following their media appearances or after commenting on social media, and 22% had received threats of physical or sexual violence. Respondents were from the UK, the US, Germany, Canada, Taiwan, New Zealand, and Brazil.

The 58-year-old man who verbally abused Kaplan-Myrth on the phone has been charged with four counts of harassment under Canada’s amended law. But is the law enough?

“I’ve gotten death threats via email that are really horrible, like somebody saying that they’re going to come cut me up into little bits and kill me, and also via Twitter and other social media,” she said. “Those threats, which are also happening to my colleagues here and elsewhere, aren’t traceable, so there’s not much that can be done.”

The bottom line, she says, is that “we’re neither heroes nor villains. We’re doing our work as physicians, nurses and healthcare workers, and we are not going to give in to bullies and bigots.”