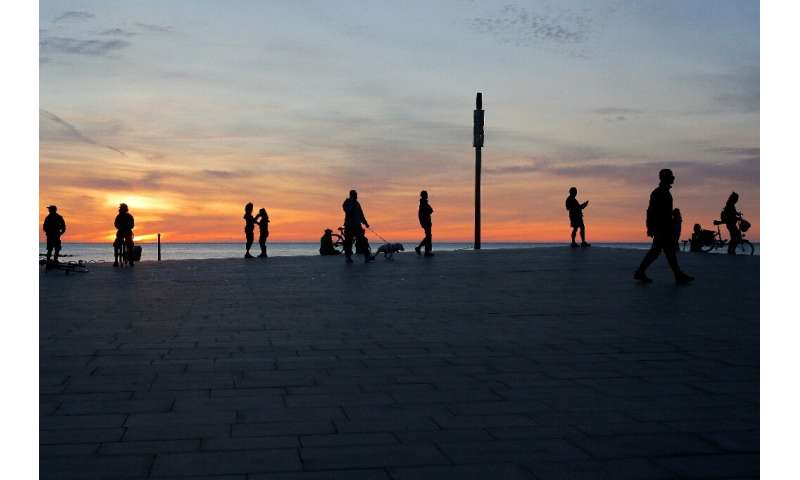 Spaniards took to the streets to jog, cycle and rollerskate for the first time following 48 days of confinement on Saturday as some European nations cautiously eased coronavirus lockdowns while Russia reported a sudden surge of infections.

As governments weigh how to lift restrictions to restart economies against the risk of new outbreaks, US authorities brought some hope by approving an experimental drug for emergency use on coronavirus patients.

The decision was the latest step in a global push to find treatments and a vaccine for the coronavirus, which has left half of humanity under some form of lockdown and pushed the world economy towards its worst downturn since the Great Depression in the 1930s.

The virus has now killed more than 241,000 people worldwide, according to an AFP tally of official figures, and infected 3.4 million since it first emerged in China late last year.

With signs the pandemic is slowing in the hardest-hit nations, European countries and some parts of the US have begun to lift restrictions to try to inject life into economies crippled by weeks of closure.

From Madrid to Mallorca, Spaniards flocked to the streets as they were allowed to exercise and walk freely outside after the government eased seven weeks of strict lockdown in a country with one of the highest number of fatalities at nearly 25,000. 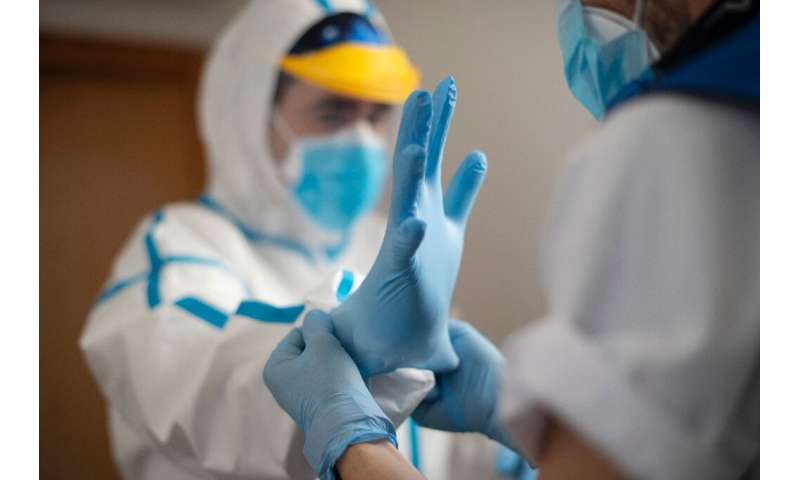 “After so many weeks in confinement, I badly wanted to go out, run, see the world,” said financial advisor Marcos Abeytua in Madrid’s Chueca district. “Yesterday, I was like a child on Christmas Eve.”

Near the city’s Retiro park, residents were out running, sometimes in groups. Crowds of joggers also mingled with cyclists and skateboarders in Barcelona’s seaside neighbourhood.

“This all seems a bit crazy to me. On the first day we get some freedom I don’t see any safe distancing at all,” said Christian, an Italian living in Barcelona.

Spanish Prime Minister Pedro Sanchez said masks would be obligatory on public transport from Monday, and children and the elderly still face restrictions on when they can go outside.

Spain, Germany, Austria and Scandinavian nations are gradually easing lockdowns as virus cases slow though they will keep social distancing measures, the use of masks and testing to try to track infections. 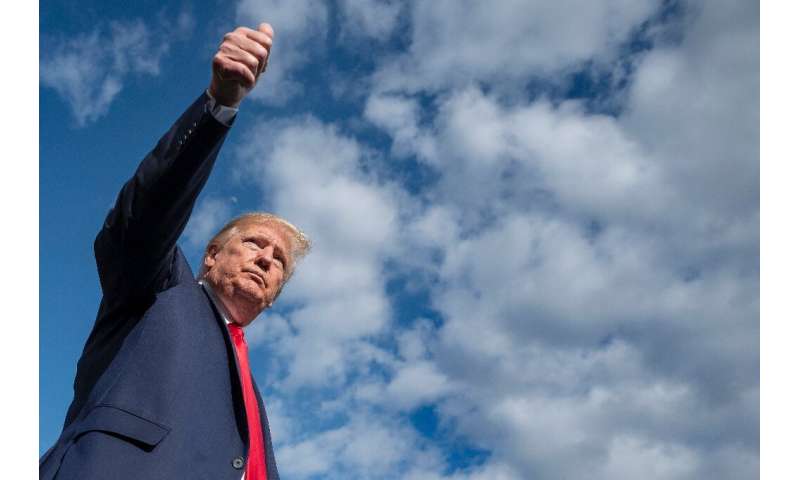 France, which will lift parts of its lockdown on May 11, on Saturday extended a health emergency by two months until late July as it reported 166 new deaths, its lowest single-day toll in more than five weeks.

“We are going to have to perform a long-distance run,” Health Minister Olivier Veran said.

After a two-month shutdown, Italians on Monday will be allowed to stroll in parks and visit relatives. Restaurants can open for takeaways and wholesale stores can resume business.

“We must maintain social distancing, maximum hygiene levels, and masks. We’ve done our bit to the best of our ability. From Monday, it’s up to you,” emergency response official Domenico Arcuri said.

Italy—with the second most fatalities after the United States—reported Saturday that its daily death toll had jumped by 474, the highest in nearly two weeks. 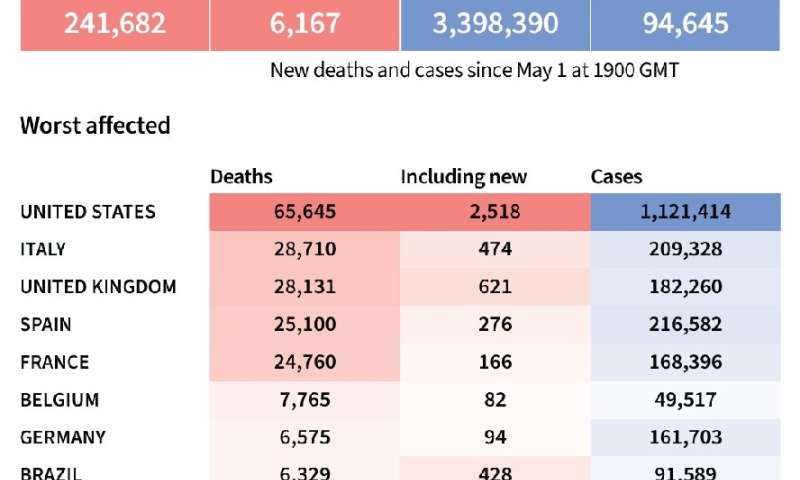 But in Russia, authorities reported the largest spike in their coronavirus cases with new infections rising by nearly 10,000 in a single day.

In Moscow, the epicenter of Russia’s outbreak, around two percent of the population is infected by COVID-19, the disease caused by coronavirus, officials said.

“The threat is apparently on the rise,” said Moscow Mayor Sergei Sobyanin.

Virus cases have been confirmed in 195 countries, including 1.5 million cases in Europe alone. But they’re likely only a fraction of true cases as testing is still limited. 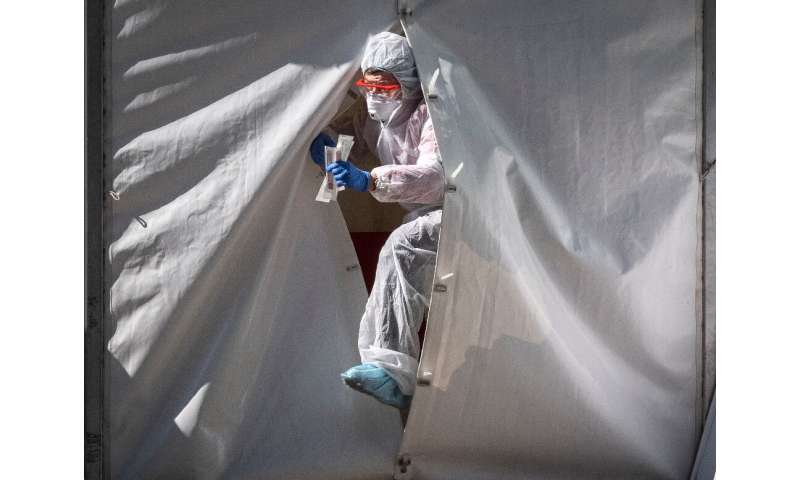 In New York City, an emergency field hospital erected in Central Park to treat virus patients is set to close, the Christian charity running it said Saturday, as cases decline in the city.

US President Donald Trump announced Friday that remdesivir, an antiviral drug initially developed to treat Ebola, was given the green light for use after a major trial found that it boosted recovery in serious COVID-19 patients.

The drug incorporates itself into the virus’s genome, short-circuiting its replication process.

Its approval came as US leaders struggled with growing pressure from citizens wearying of stay-at-home orders.

Dozens of protesters, some armed, denounced the orders at a rally in Concord, New Hampshire while other demonstrations were expected later in Kentucky and California.

On Friday, Texas became the largest US state yet to ease curbs.

Trump is keen for a turnaround as the world’s largest economy reels with tens of millions left jobless. 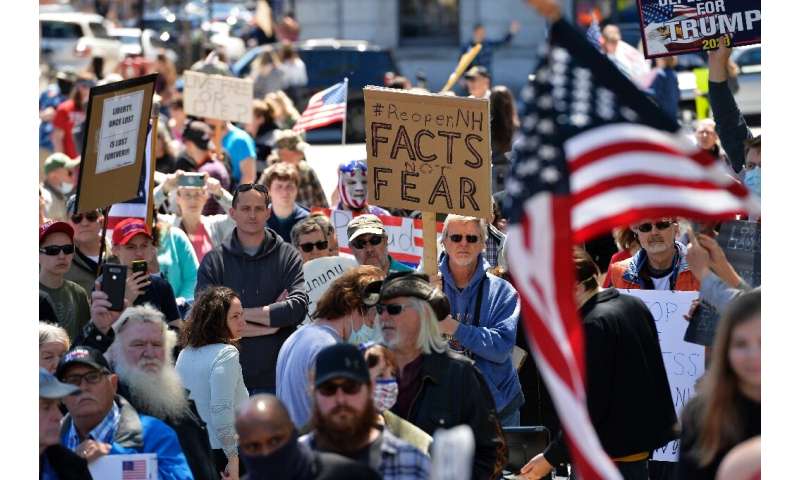 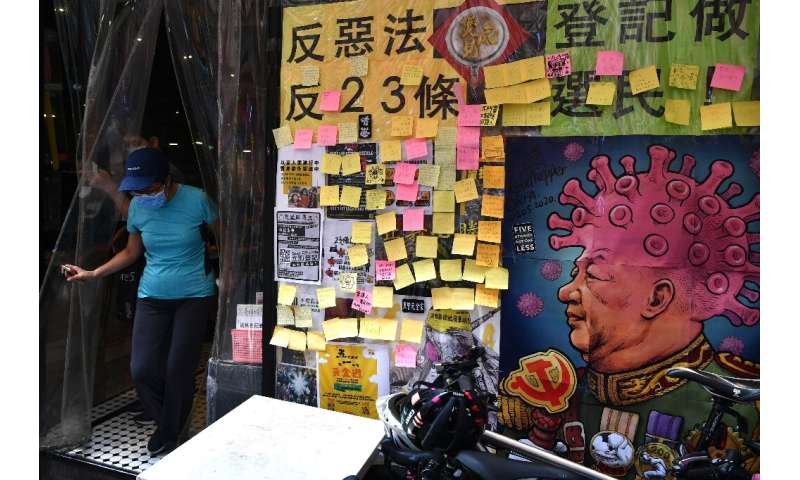 In Asia, Hong Kong recorded zero confirmed cases of coronavirus on Saturday, for the sixth day within a week, as shops and restaurants started to resume business during normal opening hours.

The city’s social distancing regulations including limits on gatherings of more than four people are due to expire on May 7. Authorities have not decided whether to extend them.

Hong Kong’s chief executive has said that civil servants will return to work in the office starting from May 4.

In India, where cases are surging, rock legend Mick Jagger and Hollywood’s Will Smith will be among dozens of international and Bollywood stars taking part in a live-streamed concert Sunday to raise funds for the battle against coronavirus.