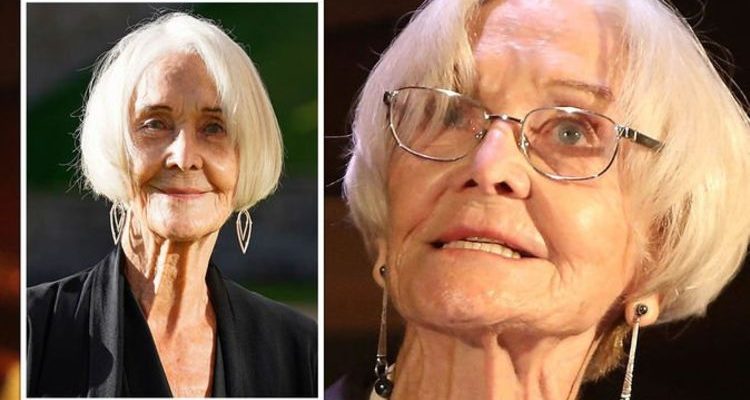 Whilst appearing on the Channel 4 show alongside Gyles, the 88-year-old actress learns a multitude of invaluable skills in the art of barging. This is made all the more impressive as she deals with crippling rheumatoid arthritis. Hiding the fact she has been suffering for fears that she might lose out on work, last year the actress finally revealed the extent of her illness.

In an interview with The Telegraph, Sheila said: “Sometimes I can’t move across the room.

“I’ve hidden the fact because of work, because I wouldn’t get employed, because I’m on the vulnerable list and all that.

“But because it’s a hidden illness and a lot of people have got it I’ve made a conscious decision to come clean about it.”

The star was diagnosed with arthritis in 2017 after she felt agonising pain in her hand. In order to cope with initial symptoms, Sheila brought a splint, but it wasn’t long before the other hand started to hurt too.

“It’s a pain like you would not believe,” she continued. “One day I was reading a script and when I got up I couldn’t move. My leg, my hip, my everything had gone into an appalling flare. I was trapped.”

Due to her age, Sheila admitted that people often treat her “with care,” which used to irritate her, but now due to her arthritis, she is grateful that people remember that she is not only old, but she also aches a bit.

Speaking to The Sun more about her condition Sheila said: “I have dodgy days but, on the whole, I’m OK.”

Worryingly however, it is not just her condition that weighs heavy on the mind of the actress, but her age in general.

In an episode of Great Canal Journeys Sheila showed off her exercise regime to co-star Gyles, and in doing so tells him that she may only have a matter of months left to live.

“This wasn’t to do with my illness,” Sheila explained after the worrying confession. “Although you can die of it and I do have to think about that – but just at my age, you’re unlikely to live many more years and that weighs heavily if, like me, you’re greedy to learn new things.”

In January of this year, Sheila admitted that filming The Discovery of Witches, a Sky fantasy drama, was made difficult due to a flare-up of the condition.

The NHS explains that rheumatoid arthritis is a long-term condition that causes pain, swelling and stiffness in the joints. Flare-ups are common, but make everyday activities increasingly difficult as symptoms become worse.

“I had been ill before filming,” Sheila said. “So I was very cheeky and asked if they could lace me in very tightly instead so that I could get away with no corset.

“I was so thin because I was going through flare-ups of the rheumatoid arthritis. Now I’m fine. I have dodgy days but, on the whole, I’m OK.”

“On the days when I’m feeling all right, I get out and walk around – I’ve been doing a lot of it in lockdown.”

The NHS explains that common symptoms of the condition include the following:

Rheumatoid arthritis is an autoimmune disease, meaning that cells in the immune system attack cells that line your joints by mistake. Over time, this can damage the joints, cartilage and nearby bone.

The NHS explains that it is not clear what triggers this problem, although there is sufficient evidence to suggest that you are at an increased risk if you are a woman, have a family history of rheumatoid arthritis or you smoke.

Currently there is no cure for arthritis, but early diagnosis and appropriate treatment enables many people with the condition to have periods of months or even years between flares.

The main treatment options include the following: