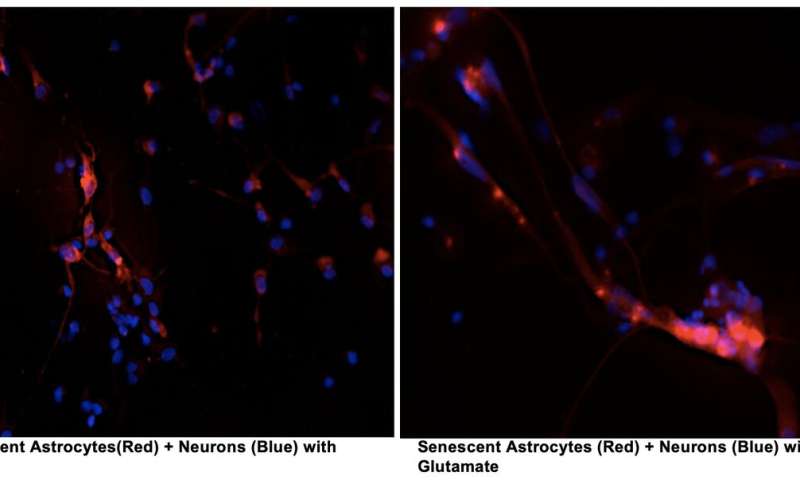 Although a link has been established between chronic inflammation and neurodegenerative diseases, there have been many open questions regarding how cellular senescence, a process whereby cells that stop dividing under stress spew out a mix of inflammatory proteins, affects these pathologies. Publishing in PLOS ONE, researchers at the Buck Institute report that senescence in astrocytes, the most abundant cell type in the brain, leads to damaging “excitotoxicity” in cortical neurons that are involved in memory.

This research, led by research scientist Chandani Limbad, Ph.D., found that cellular senescence in astrocytes downregulates the glutamate transporters, which are vital for glutamate homeostasis in the brain. Glutamate is one of the most important neurotransmitters in the brain; an excess of it causes neurons to repeatedly fire leading to their eventual death. Memantine, an FDA-approved drug for Alzheimer’s disease, reduces glutamate toxicity in patients suffering from moderate to severe disease for up to a year, but evidence that the drug might slow pathology is weak. “This study gets to the underlying mechanisms that drive the toxicity,” said senior author and Buck professor Judith Campisi, Ph.D. “We have identified targets that may be of more use in drug development.”

Cellular senescence is one of the hottest topics in research on aging. Success in the Campisi lab and others around the world has given rise to companies and research projects aimed at developing either senolytics, drugs that clear senescent cells, or senomorphics, drugs that suppress the senescence-associated inflammation. Earlier work in the Campisi lab in collaboration with the Buck Institute’s Andersen lab showed that clearing senescent cells prevented Parkinson’s in a mouse model of the disease.

Campisi says that most of the research aimed at understanding the characteristics of cellular senescence involves human fibroblasts, cells in connective tissue which produce collagen and other fibers. She says this work in astrocytes should be a wake-up call to those studying Alzheimer’s disease, arguing that, “What is commonly termed non-familial Alzheimer’s disease should probably more accurately be termed age-related dementia. If you see five spontaneous Alzheimer’s patients, all of them present differently. Some have personality changes, others don’t. Memory is affected differently in each patient; some people lose motor control, others don’t. These findings highlight aging as the biggest risk factor for almost all neurodegeneration and that is where the research should be focused.”

Co-author Pierre-Yves Desprez, Ph.D., a scientific consultant in the Campisi lab, who also runs a lab at the California Pacific Medical Center Research Institute, says the research also has implications for those studying glioblastoma, a particularly aggressive form of brain cancer which happens in astrocytes. “Cellular senescence is a double-edged sword and the current state of senescence-associated research is messy. While senescence leads to chronic inflammation which promotes cancer and neurodegeneration, it also acts as a tumor suppressor. There are many factors secreted by senescent astrocytes, we think some of them could be exploited as a way to treat glioblastoma.”