North Korea has temporarily banned all tourists from entering the country over fears the Chinese coronavirus will spread, reports say.

Two foreign tour operators today revealed officials in the Hermit Kingdom told them borders will close until the outbreak is ‘well under control’.

A South Korean budget airline has also announced it will postpone the launch of its cheap flights to Wuhan, the Chinese city at the centre of the outbreak.

T’way Air said the decision was ‘inevitable’ given the spiralling number of cases, with 317 people across Asia now confirmed to have the virus.

Six patients have died from the SARS-like infection, which has spread to Taiwan, as well as Thailand, South Korea and Japan.

Scientists are desperately trying to contain the outbreak of the never-before-seen virus, which officials yesterday confirmed has passed between humans. 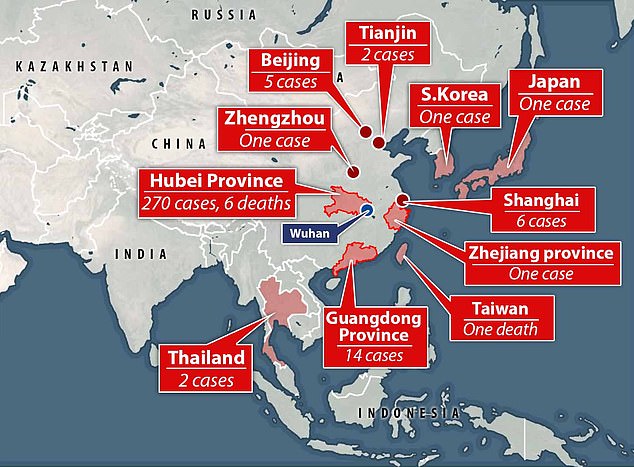 A total of 304 people are confirmed to have caught the illness, with another 54 cases suspected and more than 900 people under observation (Pictured: The most recently available breakdown of where cases have been diagnosed)

Young Pioneer Tours, an adventure travel company based in China, told Reuters that North Korean officials had told them of the temporary ban.

Rowan Beard, of the company, said he was told by officials that the suspension will stay in place until ‘they feel the coronavirus is well under control’.

Further details are yet to be confirmed by the company’s travel partners in North Korea, the Young Pioneer Tours statement said.

A manager at another foreign tour company, which hasn’t been named, said they too had been told of such a move. Further details are expected tomorrow.

The vast majority of the tourists to the Democratic People’s Republic of Korea come from China, Pyongyang’s main supporter.

North Korea – a politically-isolated country – is estimated to earn millions of dollars from the steady flow of Chinese tourists.

Tourism is one of the last major ways North Korea can legally earn foreign cash, as international sanctions restrict many other forms of business. 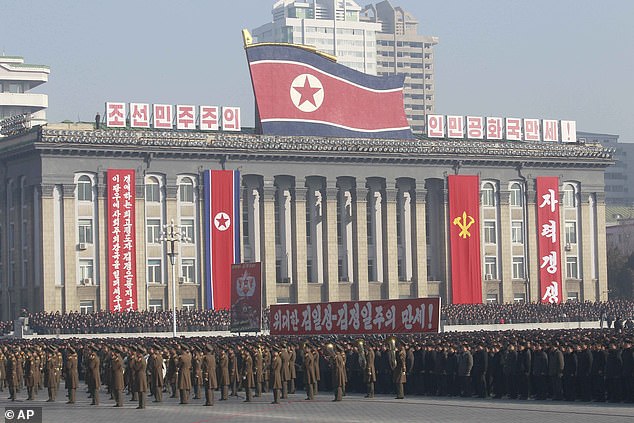 Fears are growing over the virus, with millions of Asians travelling for the Lunar New Year holiday this week.

T’way Air postponed today’s scheduled launch of a new route to the Chinese city of Wuhan because of rising concern over the spread of a new coronavirus.

South Korea yesterday reported its first confirmed case of the virus – a 35-year-old Chinese national who flew from Wuhan to Seoul on Sunday.

However, the budget airline canceled its plans because of the ongoing outbreak, a company official said.

The unnamed official told Reuters: ‘It was an inevitable decision because of the situation there.’ They added that T’way would monitor the outbreak.

An official at Korean Air Lines, the only other South Korean airline operating direct flights to Wuhan, said the company had no plans to suspend its route.

The airline, which runs the flight four times a week, announced it will waive ticket cancellation fees for passengers traveling to the city.

South Korea’s Centres for Disease Control and Prevention on Tuesday warned tourists against contact with animals and people showing respiratory symptoms and market visits in China.

President Moon Jae-in instructed local authorities to step up prevention efforts, with many South Koreans living in China expected to return home and some 32 million traveling around the country for the holiday until next week.

WHAT DO WE KNOW ABOUT THIS OUTBREAK SO FAR?

A total of 304 people are confirmed to have caught the unnamed coronavirus, which has never been seen before. Six patients have died.

Most of the cases have occurred in Wuhan, a city in Hubei province home to 11million people. But patients have been diagnosed across China, including in Beijing and Shanghai.

The coronavirus, which is from the same family as SARS, has also spread to South Korea, Thailand, Japan and Taiwan.

Chinese officials yesterday confirmed the virus has spread between humans, suggesting it can be passed through coughs and sneezes.

The outbreak is believed to have started late last month among people connected to a seafood market in Wuhan, which has since been shut.

China is entering its busiest travel period due to the Lunar New Year, which sees many people travelling back to their home town or village.

Virologists fear the increased travel that will happen over the holidays will cause a surge in cases.

So where have cases been recorded?