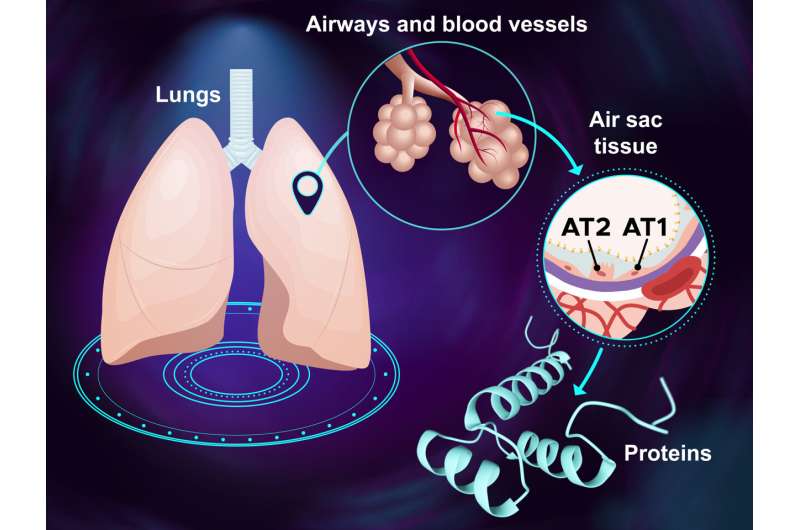 Researchers have compiled the most comprehensive road map of the protein composition of human lungs, providing a clearer picture of the healthy development of this essential organ that made terrestrial life possible.

The study, led by scientists at the Department of Energy’s Pacific Northwest National Laboratory, describes how thousands of molecules are modulated in a coordinated fashion during the formation of pulmonary tissue. The findings are expected to provide a gateway for further study of human lung formation and function.

The study was published in the Nov. 15 issue of the American Journal of Respiratory and Critical Care Medicine.

The findings lay the groundwork for progress on a host of diseases that affect more than 35 million Americans, according to the American Lung Association. The study’s authors say the molecular road map of the lung’s proteins will help physicians understand lung development. This should help guide strategies to help premature infants and lead to new ways to explore tissue regeneration in adults. Common lung diseases include asthma, pneumonia, emphysema, chronic obstructive pulmonary disease or COPD, pulmonary fibrosis, and COVID-19.

“We examined proteins in early development stages and we looked at how they are changing during the development of the organ,” said PNNL research scientist Geremy Clair, the study’s lead author. “The idea was to learn things about development that we have not seen with previous biomedical studies. Those studies—mostly derived from animals—painted part of the picture, but the data we have generated provide insights on previously unknown details.”

The lungs are a complex organ with around 40 cell types, and proteins are the engines powering the bulk of their cellular processes. Researchers analyzed the protein composition and molecular maturation in pulmonary tissue from nearly 50 donors, from birth to 8 years. Scientists identified and measured 8,938 proteins.

“The take-home message is that this is a first-of-its-kind analysis of how the protein building blocks of the lung change as a child grows from birth to mid-childhood,” said Dr. Gloria Pryhuber, a study coauthor and professor of pediatrics and environmental medicine at the University of Rochester Medical Center in New York. “This study provides a reference map for future investigators to work on certain subsets of the changing proteins, whether they be enzymes or structural proteins.”

“The lung is not completely developed when a baby is born,” Clair said. “There is a little sac at the end of the airways—the major passages of the lungs—that has to divide into grape shapes called alveoli. Our study helps us better understand how this process works. Sometimes that development does not take place as expected. Our findings will help provide answers for that unfortunate circumstance, too.”

Medical professionals will be able to use the protein map to help diagnose a variety of lung ailments as well as assess lung malfunction and disease in adults, Clair said. The data of the study are publicly available on Lungmap.net.

“This study will be a resource in understanding developmental biology,” Clair said. “It has relevance for lung transplants, for cystic fibrosis in children, for pulmonary fibrosis, as well as for idiopathic fibrosis.”

Pryhuber concurred that the study will have practical benefits for patient care.

“But that won’t happen overnight,” Pryhuber said. “Much work remains to be done. Now that it is known that these nearly 9,000 proteins are there and change with age, some may be studied as biomarkers of health or disease and others as potential targets for therapies.”

Lungs of the future

Clair also said the study could play a role in COVID treatment. “That may not happen right away,” he said. “But so many of the patients who survive COVID have experienced difficulties in breathing. We don’t know the long-term implications for those patients in years to come. But this study—along with others—will provide information that likely will assist in the development of therapeutic strategies.”

Ultimately, Clair said the lung protein data could provide some of the pieces to create artificial lungs.

“Right now, there is a shortage of donor lungs for people who need transplants,” he said. “We need to find ways to regenerate lungs, or potentially make new lungs from cells of existing lungs. Technology today is much better than it was 20 years ago. We may have better technology 20 years from now. This study is part of the data that may make this possible.”

The protein analyses were done at EMSL, the Environmental Molecular Sciences Laboratory, a DOE Office of Science user facility at PNNL.