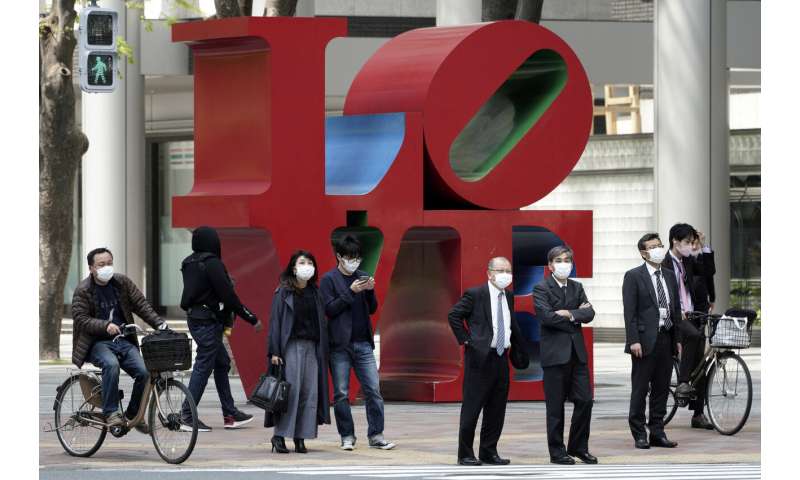 Under Japan’s coronavirus state of emergency, people have been asked to stay home. Many are not. Some still have to commute to their jobs despite risks of infection, while others continue to dine out, picnic in parks and crowd into grocery stores with scant regard for social distancing.

On Wednesday, the first day of the “Golden Week” holidays that run through May 5, Tokyo’s leafy Shiba Park was packed with families with small children, day camping in tents.

The lure of heading out for Golden Week holidays is testing the public’s will to unite against a common enemy as health workers warn rising coronavirus cases are overwhelming the medical system in some places. Experts say a sense of urgency is missing, thanks to mixed messaging from the government and a lack of incentives to stay home.

In distant, tropical Okinawa, locals have resorted to posting social media appeals to tourists not to visit, “to protect our grannies and grandpas.”

“Please cancel your trip to Okinawa and wait until we can welcome you,” Okinawa’s governor Denny Tamaki tweeted. “Unfortunately Okinawa can provide no hospitality and our medical systems, including on remote islands, are in a state of emergency.”

In this country driven by conformity and consensus, the pandemic is pitting those willing to follow the rules against a sizable minority who are resisting the calls to stay home. 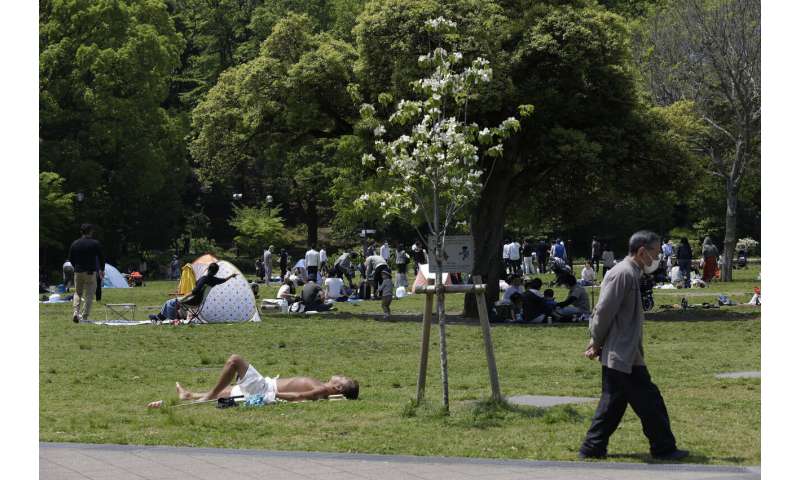 To get better compliance, the government needs stronger messaging, said Naoya Sekiya, a University of Tokyo professor and expert of social psychology and risk communications.

A tougher lockdown would also help.

While the halfhearted adherence to the calls to stay home has dismayed Tokyo Gov. Yuriko Koike, none of those spurning the advice are breaking the law. Legally, the state of emergency can only involve requests for compliance. Violators face no penalties. There are few incentives to close shops.

“The message coming from the government is rather mild, apparently trying to convey the need to stay home while prioritizing the economy,” Sekiya said. Since people lack a shared sense of crisis, instead of staying home they’re hoping for the best and assuming they won’t get infected, he said. 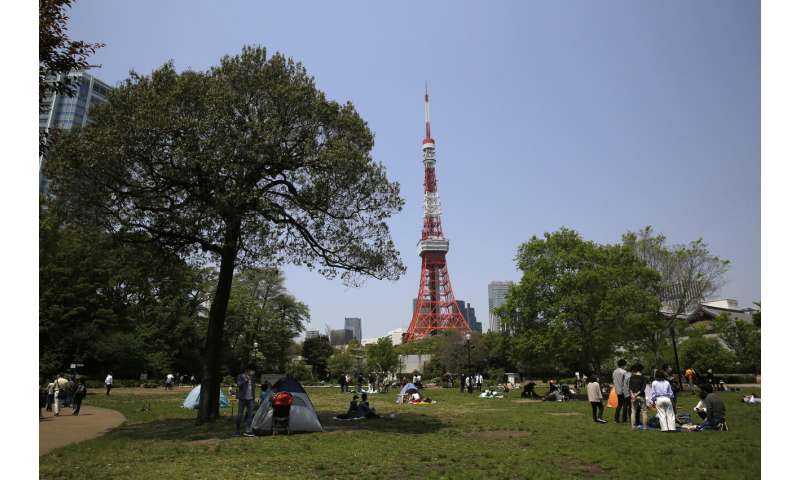 Three-quarters of people responding to a recent survey by the Asahi newspaper said they are going out less than usual. But just over half felt they could comply with Abe’s call to reduce their social interactions by 80%.

People of all ages are shrugging off the stay-at-home request. The popular “scramble” intersection in downtown Tokyo’s Shibuya looked uncrowded, but eateries and pubs on backstreets were still busy. In the western suburb of Kichijoji, narrow shopping streets were jammed during the weekend with families strolling and heading to lunch. Pachinko pinball parlors have drawn ire for staying open despite name-and-shame announcements and other pressure to close. Bars and restaurants are ignoring a requested 8 p.m. closing time.

“It’s ridiculous,” said an 80-year-old man drinking Wednesday at a downtown bar. “What am I supposed to do at home? I’d only be watching TV.” 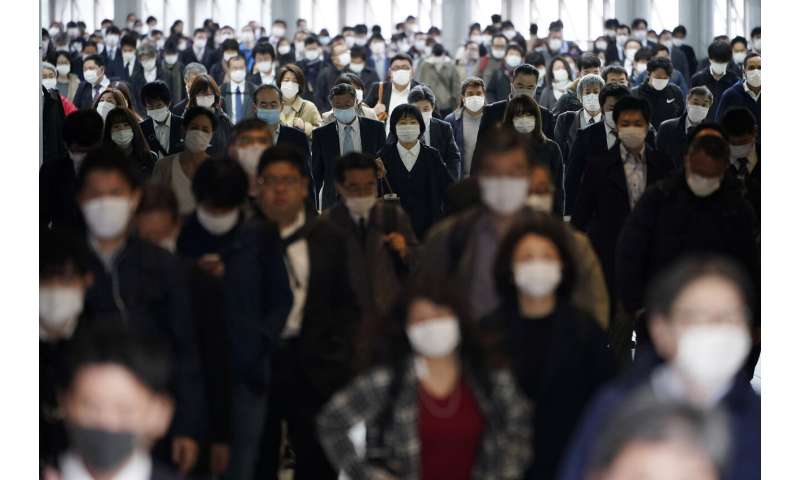 Officials are trying to fight back. In Kichijoji, they patrolled shopping arcades carrying banners saying “Please, do not go out.” Local mayors appealed to the government to close the crowded Shonan beach, popular with surfers and families, south of Tokyo. Some prefectures have set up border checkpoints to spot non-local license plates.

“It seems not everyone shares the sense of crisis,” said Kazunobu Nishikawa, a disaster prevention official in Musashino city, which oversees Kichijoji. “Many people understand the risks of this infectious disease,” he said, but “others seem to think COVID-19 is nothing more than a common cold and don’t care as long as they don’t catch it.”

Abe declared the state of emergency on April 7, as virus cases surged. It initially covered only Tokyo and six other areas but later expanded to include the whole country. 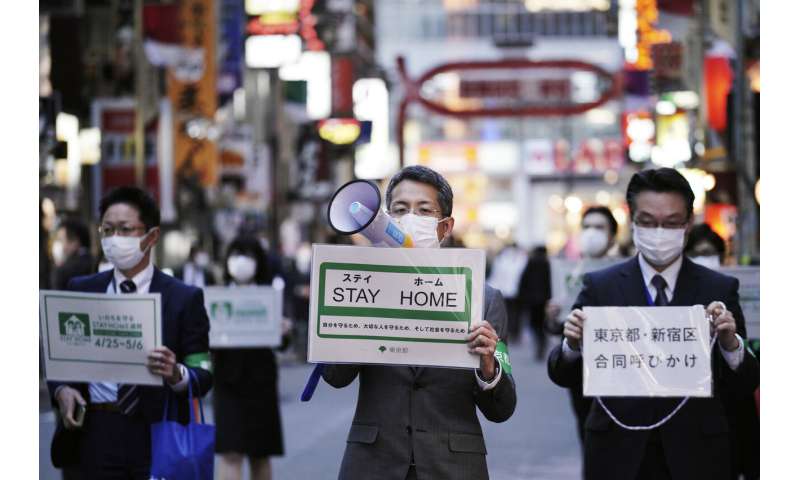 Abe did not ask non-essential businesses to close. But Koike, the Tokyo governor, fought and prevailed in requesting that schools, movie theaters, athletic clubs, hostess bars and other such businesses in the city be asked to close. Most restaurants and pubs still can operate from 5 a.m. to 8 p.m., and grocery and convenience stores and public transport remain open as usual.

The government has rolled out an unprecedentedly huge economic package of 108 trillion yen ($1 trillion) that included loans for small businesses and other coronavirus measures. Responding to criticism he was neglecting individuals and families in dire need of cash to survive, Abe belatedly announced cash payouts of 100,000 yen each to all residents of Japan.

Survey data show the 80% social distancing target has roughly been met during weekends, with the numbers of nightlife goers and commuters noticeably lower. But parks and popular outdoor spots in Japan’s densely crowded cities are still bustling with people, said Hiroshi Nishiura, a Hokkaido University professor and expert of epidemiological analysis. 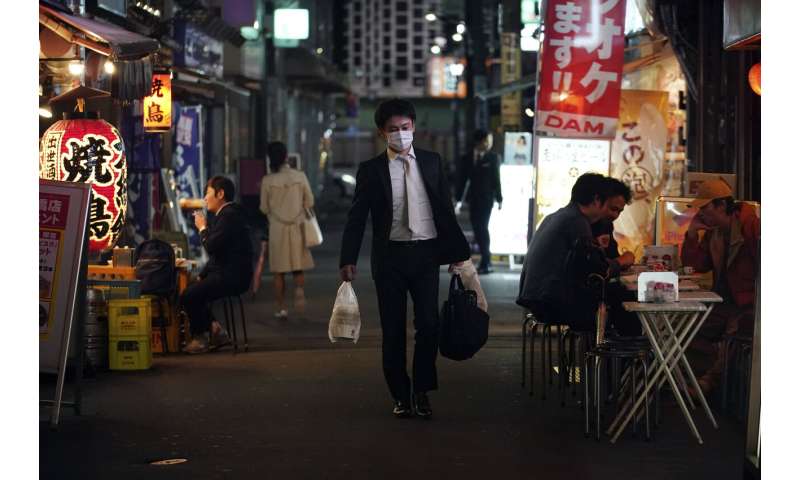 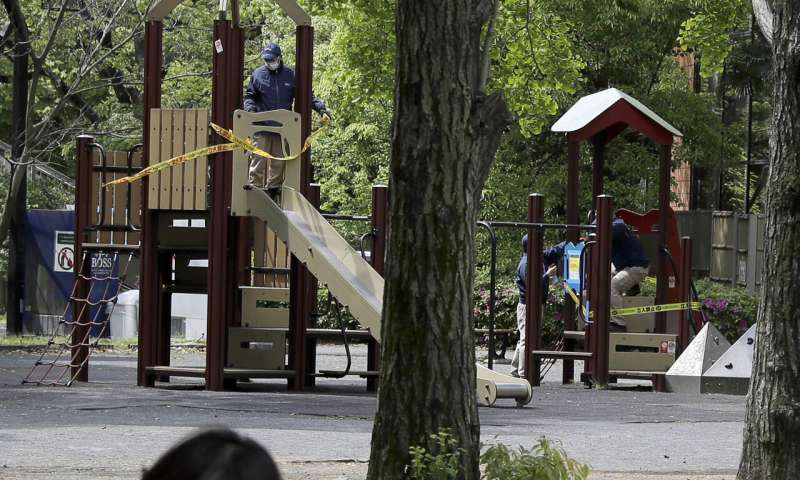 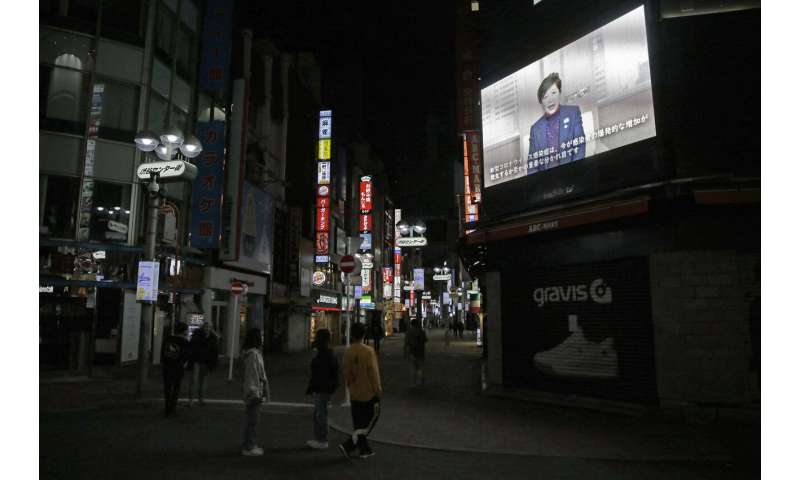 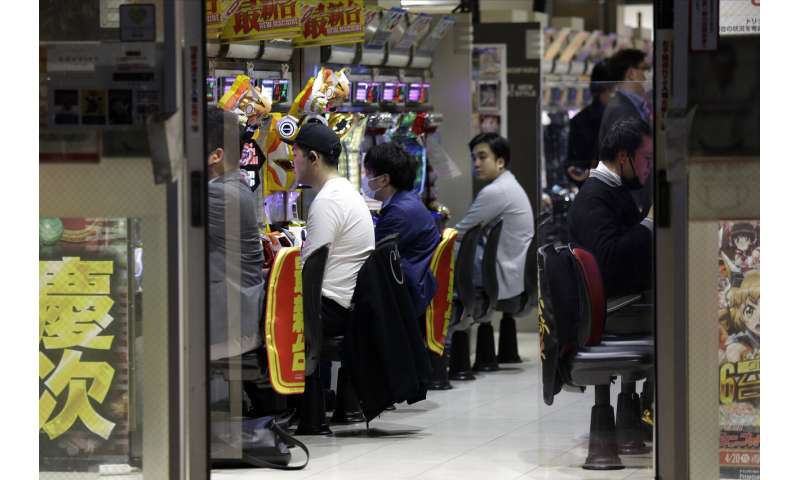 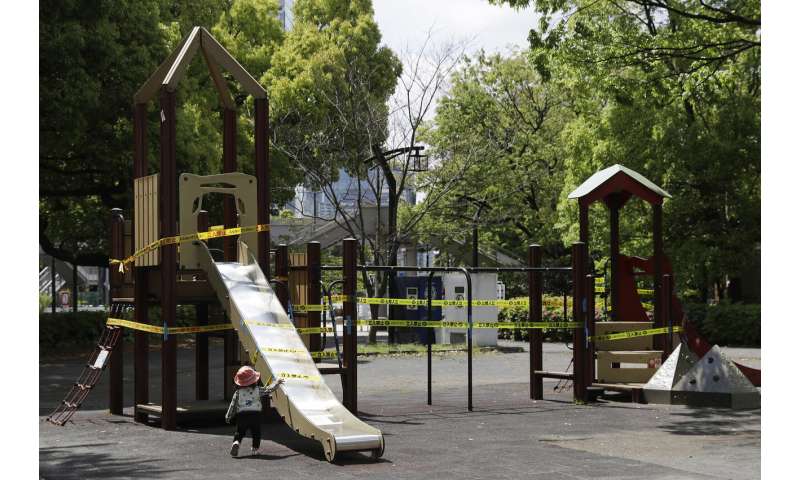 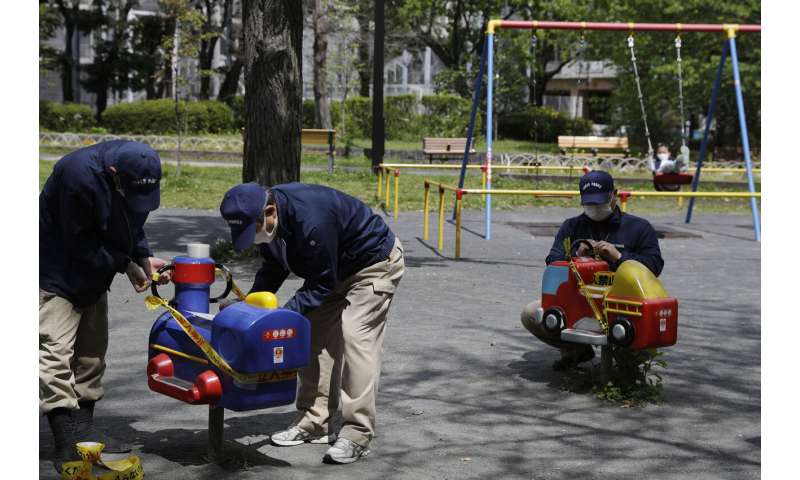 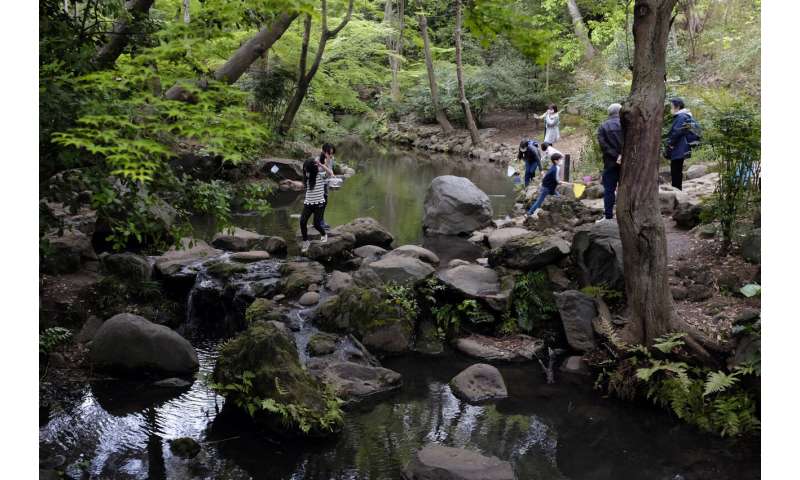 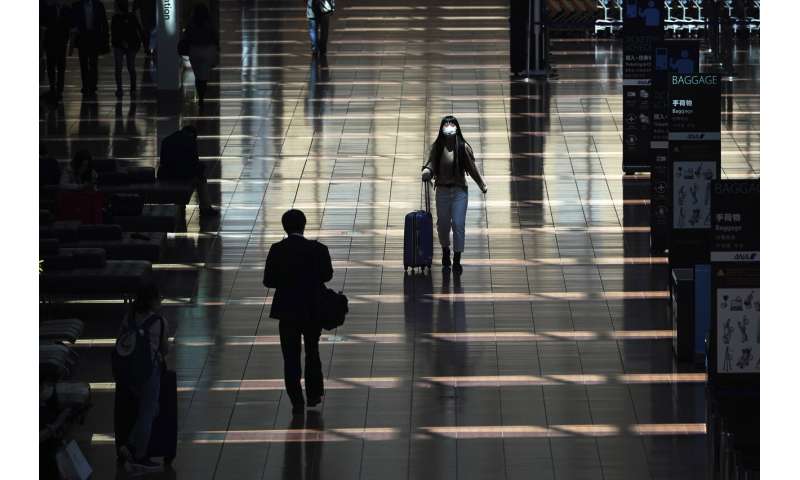 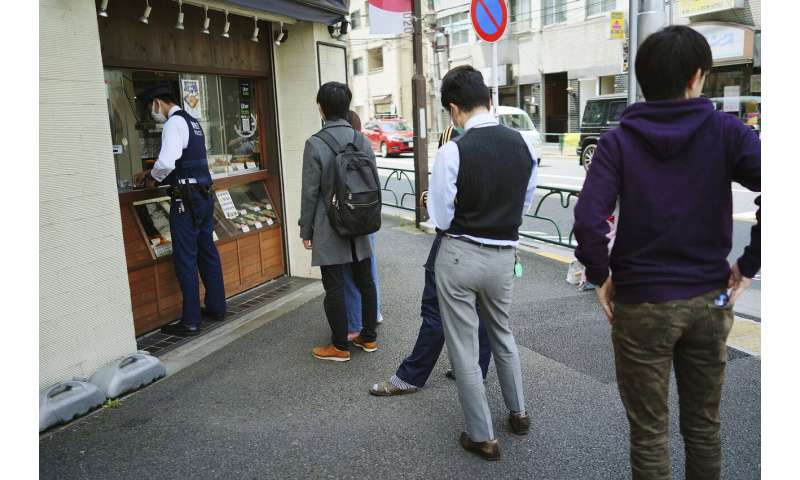 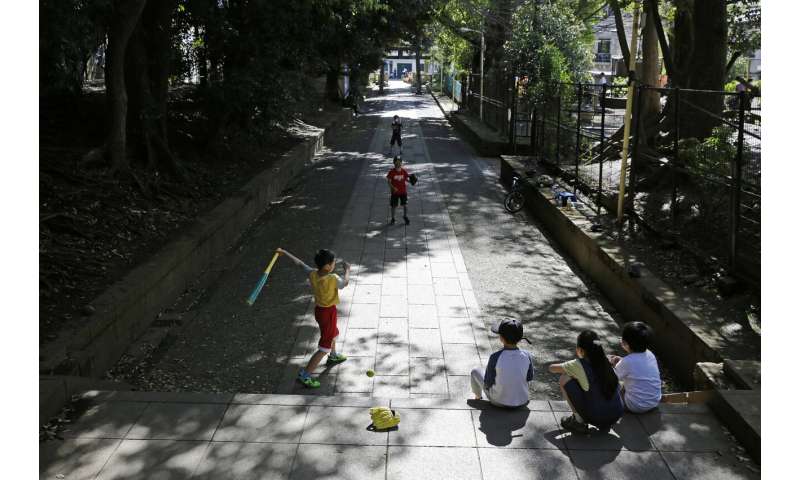 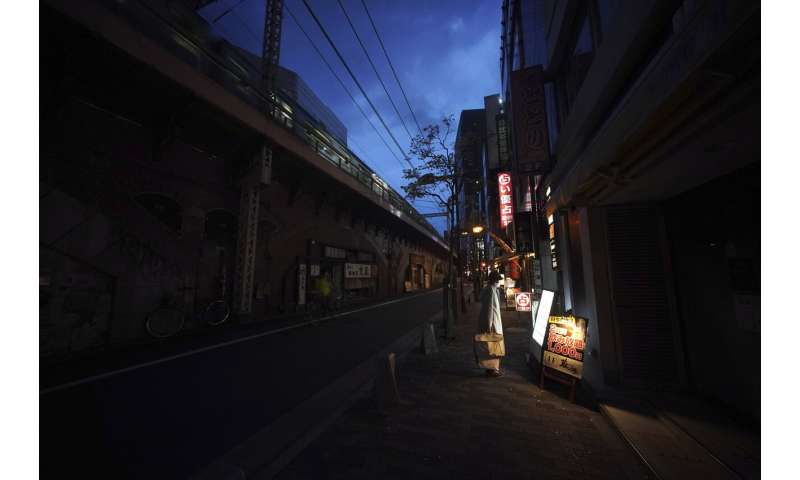 Tokyo reported 47 newly confirmed cases on Wednesday, with the total across the nation just over 14,000, though limited testing means the number of infections is likely much higher.

Call center employee Mayumi Shibata is among the many Japanese who cannot fully work from home, partly because much paperwork in this modern nation is still not computerized and most documents must be stamped in person using ink seals.

“I will commute as long as I can keep my job,” Shibata said while standing outside the busy downtown Shinagawa train station one recent morning.