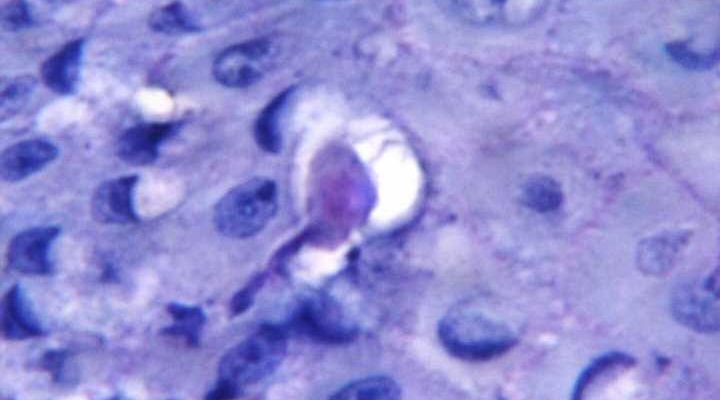 For the first time, researchers from Charité–Universitätsmedizin Berlin have shown that a unicellular parasite commonly found in the mouth plays a role in both severe tissue inflammation and tissue destruction. Most patients with severe and recurrent periodontitis (gum disease) showed an increased presence of the amoeba Entamoeba gingivalis inside their oral cavities. The effect of this amoeba is similar to that of Entamoeba histolytica, the parasite responsible for causing amebiasis. Once the parasite has invaded the gingival tissue, it feeds on its cells and causes tissue destruction. According to the researchers’ findings, which have been published in the Journal of Dental Research, the two amoebae show similar mechanisms of tissue invasion and elicit a similar immune response in the host.

Periodontitis, or gum disease, is an inflammation of the gums and supporting structures of the teeth. It is one of the most common chronic diseases in the world. In Germany, approximately 15 percent of people are affected by a particularly severe form of this disease. If left untreated, periodontitis will lead to tooth loss. The disease also increases the risk of arthritis, cardiovascular disease and cancer. In patients with periodontitis, a decrease in the diversity of the oral flora coincides with an increase in the frequency of E. gingivalis. A team of researchers, led by Prof. Dr. Arne Schäfer, Head of the Periodontology Research Unit at Charité’s Institute of Dental and Craniofacial Sciences, was able to show that oral inflammation is associated with colonization by the oral parasite E. gingivalis.

Scientists have long been aware of the virulence potential of this genus of amoebae. The gastrointestinal parasite E. histolytica, for instance, causes a disease known as amebiasis, one of the most common causes of death from parasitic diseases worldwide. “We have shown that an amoeba like E. gingivalis, which colonizes the oral cavity, will invade the oral mucosa and destroy gingival tissue. This enables increased numbers of bacteria to invade the host tissue, which further exacerbates inflammation and tissue destruction,” says Prof. Schäfer. The international team of researchers was the first to describe precise roles of E. gingivalis in the pathogenesis of inflammation. During their analysis of inflamed periodontal pockets, the researchers detected evidence of the amoeba in approximately 80 percent of patients with periodontitis, but in only 15 percent of healthy subjects. Their observations revealed that, after invading the gums, the parasites move within the tissue, feeding on and killing host cells. Cell culture experiments showed that infection with E. gingivalis slows the rate at which cells grow, eventually leading to cell death.

The researchers concluded that the amoeba’s role in inflammation shows distinct parallels to the pathogenesis of amebiasis. “E. gingivalis actively contributes to cell destruction inside the gingival tissue and stimulates the same host immune response mechanisms as E. histolytica during its invasion of the intestinal mucosa,” explains Prof. Schäfer. “This parasite, which is transmitted by simple droplet infection, is one potential cause of severe oral inflammation.”