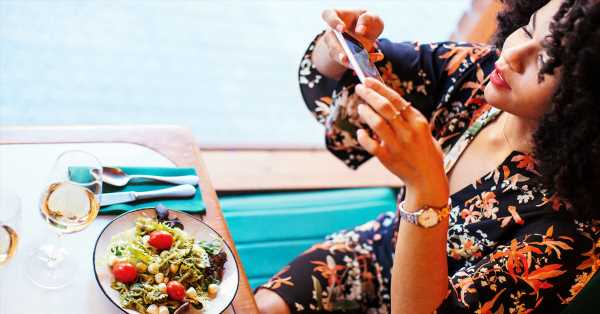 These range from artistic photos of restaurant meals, to daily updates on your friends’ keto or paleo diet, to their guilty confessions of late-night fast food runs.

Whatever people in your online social circles are saying about food, there’s a good chance that you know a lot about their eating habits and food preferences.

This information provides clues about the social norms of your online circles when it comes to food, which the authors of a new study say may shape your own eating habits.

“This study suggests we may be influenced by our social peers more than we realize when choosing certain foods. We seem to be subconsciously accounting for how others behave when making our own food choices,” said study author Lily Hawkins, a PhD student at Aston University in Birmingham, UK, in a press release.

Alix Timko, PhD, a researcher at PolicyLab at Children’s Hospital of Philadelphia (CHOP) and a clinician-scientist in the Eating Disorder Assessment Treatment Program at CHOP, pointed out that the new study doesn’t look directly at how social media affects people’s eating habits.

These social norms also exist in other situations, such as in the real world among university students or co-workers.

But researchers focused on social media because these sites now make up a large amount of our social interactions.

In the study, researchers asked 369 university students about their consumption of fruits, vegetables, energy-dense snacks, and sugar-sweetened beverages, as well as their Facebook and other social media use, and perceptions about their online friends’ eating habits and preferences.

It turns out that even in the online world, social norms can affect people’s eating habits — in two specific ways.

“When individuals think that other members of a group eat more servings of fruits and vegetables and/or eat fruits and veggies more often, they report eating more fruits and veggies [themselves],” said Timko, who’s also an assistant professor of psychiatry at the Perelman School of Medicine at the University of Pennsylvania. She wasn’t involved in the new study.

The second effect has to do with what we think we should be doing.

The researchers also looked at whether social norms were linked to a person’s body mass index (BMI). They weren’t, although the researchers say this may be because it takes longer for overweight or obesity to show up.

The study was published online February 6 and will appear in the journal Appetite in the June 2020 issue.

Social norms such as these have played a part in many public health campaigns — such as “don’t drink and drive” and teen anti-vaping campaigns — where behaviors are identified as being what most people do.

The authors of the new study think that their work could also be used to encourage people to eat more fruits and vegetables and less high energy-dense snacks and sugar-sweetened beverages.

“The implication is that we can use social media as a tool to ‘nudge’ each other’s eating behavior within friendship groups, and potentially use this knowledge as a tool for public health interventions,” said Hawkins.

There’s a lot of room for improvement in these areas.

In addition, 36.6 percent of adults ate on any given day, while 49 percent drank a , reports the CDC.

Timko said social media could be used to show “pictures of beautiful dishes of veggies and fruits” alongside information about social norms. This might encourage people to eat more of these foods.

These kinds of public health campaigns, though, will have to walk a fine line, because labeling certain foods as “healthy” or “unhealthy” can also imply that they are “good” or “bad.”

“This attaches a moral value to food and can inadvertently shame people who eat foods that are perceived as ‘unhealthy’ and praise those who eat ‘healthy,’” said Timko.

She said this is partly how social norms work, but this type of messaging can increase the risk of disordered eating.

Caution may be especially needed with social media messaging, because some research shows a link between social media use among teens and disordered eating behaviors such as worrying about their weight or shape, skipping meals, binge eating, or exercising excessively.

Still, “whenever one decides to curate these types of messages,” said Timko, “it is really important to think of the potential negative effect that they have.”