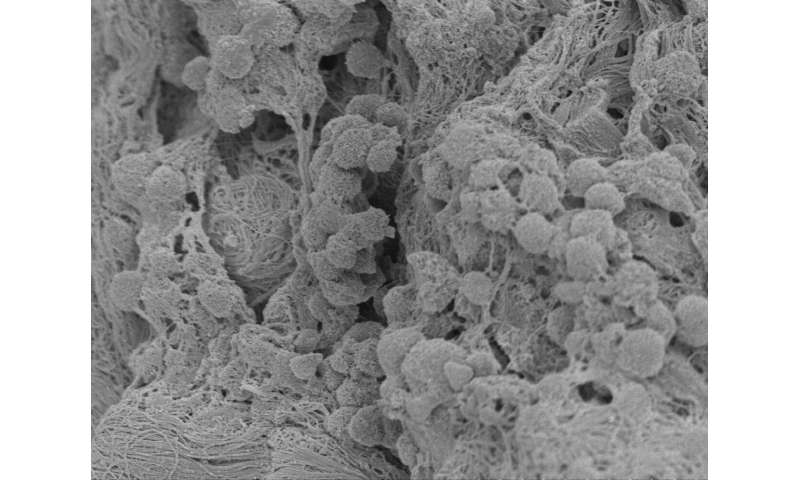 Dendritic cells (DCs) are one of our bodies’ first line of defense against invaders, and are stationed like sentinels at all outer and inner surfaces as well as in most of our organs. When they detect something foreign, they become active and migrate into lymph nodes, where they present the foreign substance to B cells and T cells to initiate a protective response. This crucial role in activating immune responses makes DCs an attractive target for immunotherapy, but so far no technology exists that can effectively label, track, and target DCs in the body.

Now, researchers from Harvard’s Wyss Institute for Biologically Inspired Engineering and John A. Paulson School of Engineering and Applied Sciences (SEAS) have created a new approach that can successfully label DCs in vivo using an engineered sugar molecule that is taken up by the DCs, processed by their metabolism, and displayed on their surfaces. That same molecule also serves as a target, allowing a wide range of molecules to be delivered right to DCs via “click” chemistry to modulate their behavior. When administered to mice with cancerous tumors, this system dramatically increased their survival time and shrank the size of their tumors. The research is published today in Nature Materials.

“Previous techniques attempting to label DCs required taking them out of the body and manipulating them, which can dramatically change their behavior when they’re reintroduced,” said Hua Wang, Ph.D., a Technology Development Fellow at the Wyss Institute in the lab of Wyss Core Faculty member David Mooney, Ph.D. “The new system we have developed allows DCs to be easily labeled inside the body, and can also be used to modulate their interactions with T cells, which has great promise for treating cancer and other diseases.”

Pour some sugar on me

The technique developed by Wang and his colleagues takes advantage of the fact that living cells are continuously metabolizing different kinds of sugars into molecules that are then displayed on their membranes, where they serve a variety of functions. The team first engineered a synthetic sugar molecule that is not found in nature, called an azido sugar, which DCs readily internalize and process into an azide molecule that they display on their outer surfaces for more than two weeks.

While the azido sugars reliably labeled DCs in vitro, the team needed a way to move that process inside the body. They turned to a technique that has been previously used by the Mooney lab within the Wyss Institute’s Immuno-Materials platform to concentrate and tune DCs to treat cancer: biomaterial scaffolds. These biocompatible, porous hydrogels are implanted into the body, where they release a cytokine called granulocyte-macrophage colony-stimulating factor (GM-CSF) that attracts DCs.

The team seeded these scaffolds with nanoparticles made of azido sugar polymers, then implanted them into living mice. After three days—when the concentration of DCs inside the scaffolds reached its peak—the implanted scaffolds were exposed to harmless ultrasound radiation, which loosened the bonds of the hydrogel scaffold and allowed the azido sugar nanoparticles to be released and subsequently taken up and processed by the DCs.

To test how reliably their azido sugar molecules allowed labeled DCs to be tracked, the researchers counted the number of azide-positive DCs present in the mice’s lymph nodes, which is where DCs naturally congregate after surveilling the body. They found large numbers of azide-positive DCs in lymph nodes of mice that had received the sugar-loaded hydrogel scaffold and ultrasound treatment, compared with mice that had received a scaffold without ultrasound or a blank scaffold. The azide label persisted on the surfaces of DCs in the lymph nodes for up to 21 days, indicating that they could be used for longer-term tracking and study of DC activity.

“Cancer vaccines like the one developed in our lab depend on the migration of activated DCs from a biomaterial scaffold into the body’s lymph nodes so they can prime T cells against a given antigen, but previously there was no way to see that step happening. Now, we have a way to track and quantify DCs so we can ensure they are getting to where they need to go,” said Wang.

Being able to label and track DCs in vivo was an achievement all its own, but the team’s aspirations went one step further—could they use those same labels to control the DCs’ behavior? To answer that question, they turned to click chemistry, which refers to pairs of small biocompatible molecules that bind quickly, irreversibly, and specifically to each other. Azido groups’ click chemistry partner is a molecule called dibenzocyclooctyne (DBCO), so the researchers hypothesized that they could deliver molecular “cargoes” directly to DCs in lymph nodes by attaching them to DBCO.

The team first conjugated DBCO to a fluorescent molecule called Cy5 and injected it into mice that had been given the scaffold+ultrasound treatment, and saw a marked increase in fluorescence in the animals’ lymph nodes, indicating that DBCO-Cy5 had indeed homed to the DCs that had congregated there.

Based on this positive result, the researchers then tried attaching DBCO to a variety of cytokines, which are proteins that carry signals between cells and are known to drive and influence immune responses. One cytokine called IL-15/IL-15Rα, once presented on the surface of DCs, can initiate the proliferation of CD8+ T cells and natural killer cells, which target and kill pathogens. When the team injected DBCO-bound IL-15/IL-15Rα into mice that had received the scaffold+ultrasound treatment, their azide-labeled DCs successfully captured the cytokine via click chemistry.

To test the ability of the captured cytokine to effectively activate a T-cell response, the researchers primed untreated mice’s immune systems with two peptides that are recognized as “foreign” by the body, and generated DCs that display both peptides and azide molecules on their surfaces. Then they injected DBCO-bound IL-15/IL-15Rα to induce the DCs to present the peptides to T cells. The mice that received the targeted cytokine generated a stronger T-cell response against the peptides and, importantly, displayed no negative side effects, as this approach requires a dose of cytokine 100 times lower than that used in past studies.

Chemistry that clicks to fight cancer

For the pièce de résistance, the team tested their DC-labeling system’s performance against cancer in living mice. After receiving the scaffold+ultrasound treatment, mice with azide-labeled DCs in their lymph nodes were injected with DBCO bound to a peptide called E7, which is expressed in human papilloma virus (HPV)-associated cancers, as well as DBCO bound to CpG, a short, single-stranded DNA molecule that stimulates the immune system. These mice displayed significantly higher numbers of CD8+ T cells that were active against E7 compared with mice that received “free” E7 and CpG, indicating that the DBCO had successfully delivered its cargoes to the DCs, which had primed the T cells. This T-cell response provided full protection against cancer when the mice were later injected with E7-expressing lung cancer cells. The system also effectively treated mice with established lung cancer tumors—those that received it had slower tumor growth and longer tumor-free survival than mice that received either an empty hydrogel scaffold or no treatment at all.

“Fundamentally, this is a technology that allows us to tag cells and target them in a really precise manner in the body. In this study, we demonstrated that it has efficacy for cancer immunotherapy, but it also has the potential to be used in other contexts where you want to be able to control how cells interact with each other,” said Mooney, who is also the Robert P. Pinkas Family Professor of Bioengineering at SEAS.

The Mooney lab is continuing to explore different types of molecules that can be delivered to DCs via this system, and plans to apply it to studying and mediating other immune cell interactions.