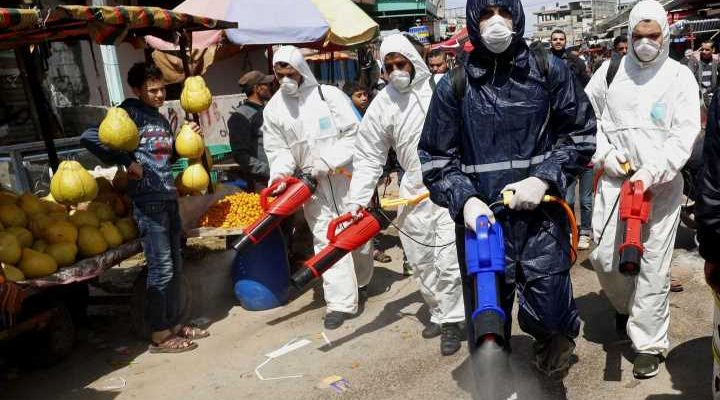 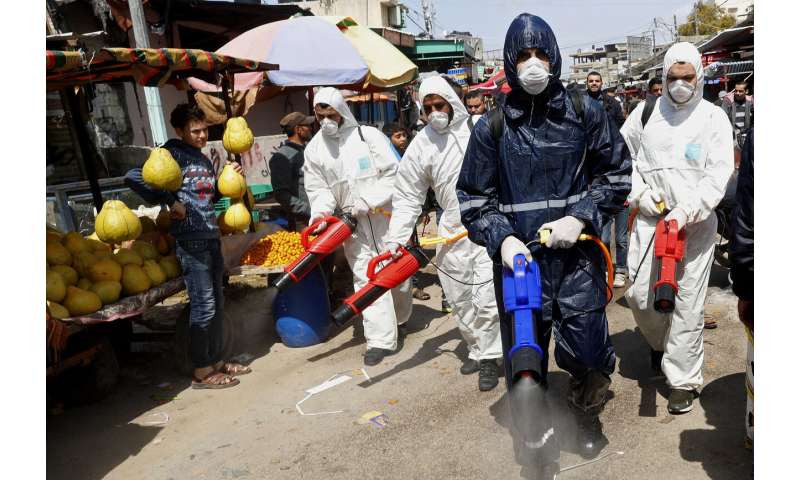 The arrival of the coronavirus in the Gaza Strip, an impoverished enclave where the health care system has been gutted by years of conflict, raised fears Sunday the pandemic may now prey on some of the most vulnerable populations in the world.

Authorities in the Gaza Strip, which has been under an Israeli and Egyptian blockade since the Islamic militant group Hamas seized power from rival Palestinian forces in 2007, confirmed its first two cases overnight, in returnees who had come from Pakistan.

An outbreak could wreak havoc on the Palestinian territory, which is home to over 2 million people, many in cramped cities and refugee camps. There are similar concerns about a catastrophe if the virus turns up in war-torn Syria, Libya or Yemen.

The virus causes only minor flu-like symptoms in most people, who recover in a matter of weeks. But it is highly contagious and can cause severe illness or death in some patients, particularly the elderly and those with underlying health problems. Severe cases are often only able to breathe with respirators.

Abdelnasser Soboh, director of the World Health Organization’s Gaza office, said the territory only has 62 ventilators, with all but 15 already in use. He estimates the territory needs 50 to 100 more to address an outbreak.

With its current capacity, he estimates Gaza’s hospitals can handle the first 100 cases if they come in gradually. “If there is a spread to hundreds, this will cause a challenge to the health care system,” he said.

Gaza’s isolation likely delayed the arrival of the coronavirus, which has infected more than 300,000 people worldwide and killed more than 13,000. More than 90,000 people have recovered. 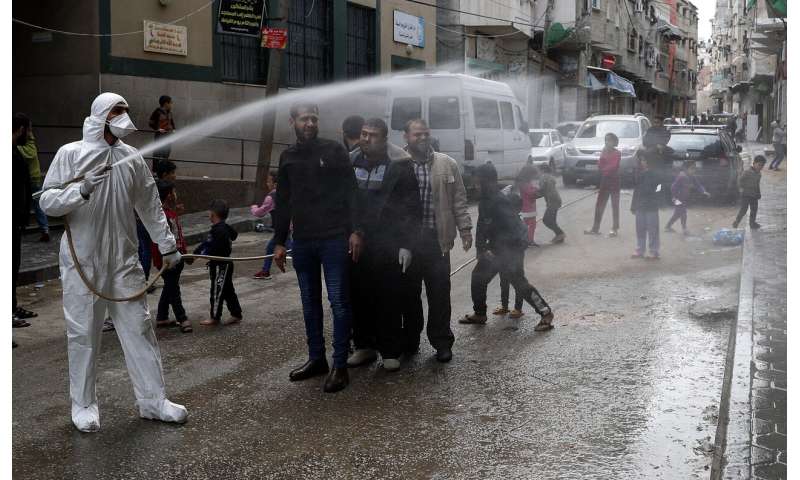 Hundreds of Gazans have returned home in the past two weeks, but only 92 people have been examined, highlighting the territory’s limited testing capacity. More than 1,270 people have been quarantined at hospitals, hotels and schools after crossing into Gaza from Israel and Egypt, according to the Health Ministry.

Several countries in the Middle East that have sealed their borders and ordered the closure of nonessential businesses. On Friday, Hamas ordered the closure of wedding halls and weekly street markets, after earlier closing Gaza’s schools. Sanitation crews have also been patrolling the streets and public buildings, spraying disinfectant.

In Lebanon, army helicopters flew over Beirut and other areas, including the eastern Bekaa Valley, urging people to stay home unless they have to leave for an emergency. In the capital, army and police patrols drove through the streets ordering groups of people to disperse.

Lebanon ordered the closure of all nonessential businesses several days ago and the police in Beirut have cleared out the city’s famed Mediterranean boardwalk. Lebanon, with a population of around 5 million, including hundreds of thousands of Syrian and Palestinian refugees, has reported 230 confirmed cases and four deaths.

Outside the capital, the residents of some villages have set up checkpoints and are only allowing their neighbors in once their cars have been sprayed with disinfectant.

Interior Minister Mohamed Fehmi told reporters that there will be a “crackdown” against any gathering of people. “The situation is scary. Let us save ourselves, our loved ones and our country before it’s too late,” he said.

The worst outbreak in the region is in Iran, which has reported more than 21,600 cases and 1,685 deaths, according to government figures released Sunday. 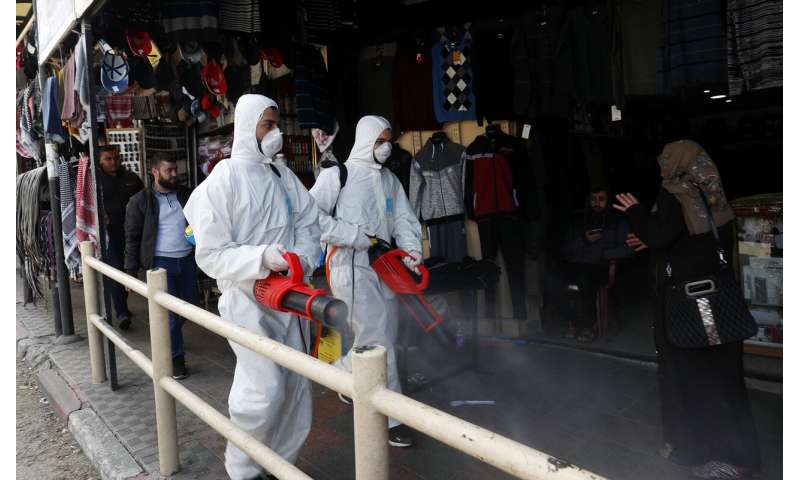 Iran’s supreme leader refused U.S. assistance to fight the new coronavirus, citing an unfounded conspiracy theory that the virus could have been created by Americans.

Ayatollah Ali Khamenei’s comments come as Iran faces crushing U.S. sanctions blocking the country from selling its crude oil and accessing international financial markets. But Iranian officials have also come under heavy criticism for not imposing stricter measures early on to curb the spread of the pandemic.

The 80-year-old Khamenei seized on a conspiracy theory increasingly used by Chinese officials about the new virus to deflect blame for the pandemic. The virus first emerged in China late last year.

“I do not know how real this accusation is but when it exists, who in their right mind would trust you to bring them medication?” Khamenei said. “Possibly your medicine is a way to spread the virus more.”

He also alleged, without offering any evidence, that the virus “is specifically built for Iran using the genetic data of Iranians which they have obtained through different means.”

“You might send people as doctors and therapists, maybe they would want to come here and see the effect of the poison they have produced in person,” he said.

There is no scientific evidence to support Khamenei’s comments. 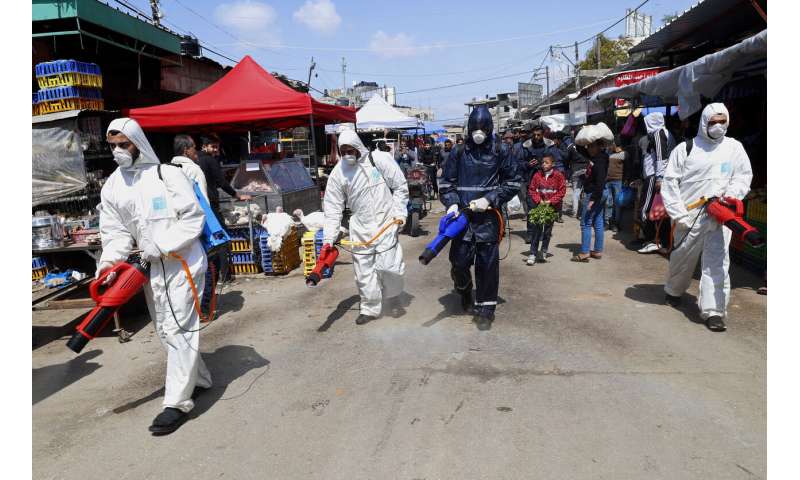 Scientists have not yet determined exactly how the new coronavirus first infected people. Evidence suggests it originated in bats, which infected another animal that spread it to people at a market in Wuhan, the Chinese city that was the epicenter of the outbreak.

On Sunday, Iran imposed a two-week closure on major shopping malls and centers across the country to prevent spreading the virus. Pharmacies, supermarkets, groceries and bakeries will remain open.

In Saudi Arabia, the kingdom said its armed forces are now taking part in combating the virus, setting up mobile hospitals in various cities.

And in Kuwait, authorities have instituted a nightly curfew from 5 p.m. to 4 a.m., warning that violators face up to three years in prison and fines of $32,000 if arrested and convicted.