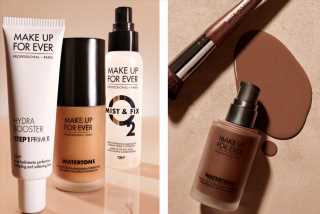 PARIS — Make Up For Ever took a risk, and it’s paying off.

Its Rouge Artist lipstick was meant to come out in May 2020, then that debut was postponed until September 2020.

“Almost no brands were launching color products, and in particular lipstick, at that time,” said Gabrielle Rodriguez, chief executive officer of Make Up For Ever. “[But] people still need to have a bit of fun, even if they are locked down, and in particular after six months in a pandemic already. So we got this extra exposure thanks to that.”

The semi-matte product was successful worldwide, from the time of launch, she continued. That paired with a new brand platform and communication resulted in market share gains for the brand across all geographies, especially in China and the rest of Asia, and in the Middle East.

Still, last year was tough for all color brands, including Make Up For Ever, due largely to people being homebound and made-to-wear masks.

Rodriguez said by the end of 2020, the selective color cosmetics market’s sales were down between 30 percent and 35 percent globally, while fragrance sales were close to flat and skin care sales rose slightly.

“We’ve done better than the market,” Rodriguez said. “Today, we are almost back to the 2019 situation.”

The executive didn’t discuss sales figures, but according to industry sources, Make Up For Ever generates annual retail revenues of more than 400 million euros.

A key component to the brand’s relaunch was to implement a collective creative vision.

“It was so important to make sure it was a reality, because it’s the story of Dany Sanz — she used to work like this, surrounded by her friends, makeup artists coming from all over the world,” said Rodriguez, referring to Make Up For Ever’s founder.

The brand was reorganized by mid-2020 whereby 40 to 50 makeup artists from its pool of almost 2,000 became involved in product ideation, formula evaluation and shade range co-development, among other steps for products destined for women and men around the globe.

Make Up For Ever pros are working on foundations for darker skin tones due to come out in early 2022, for instance.

They also focus on translating professional color-cosmetics routines into routines that can be easily used by everyone.

Products with a care component have long been important to the brand. Right before the pandemic, it launched the multiuse foundation Reboot, with moisturizing properties. That was introduced at Sephora in the U.S. in February 2020 and it immediately became one of the top-selling foundations there.

Make Up For Ever has been increasing the eco-conception of its packaging and formula, too. This March, it launched Watertone, for example, with 94 percent naturally derived ingredients. The foundation’s mono-material cap is made with recycled glass.

Watertone is billed to be ultra-resistant, non-transfer, good for skin and with a fresh finish. It’s designed with consumers in mind who might otherwise have shied away from using high-coverage foundation.

Make Up For Ever has a number of long-wear (mask-friendly) products in its portfolio, also including Aqua Resist makeup and Mist and Fix Makeup Setting Spray.

“We are even more demanding than before regarding any kind of wear,” said Rodriguez, ticking of characteristics such as sweat-proof, transfer-proof and humidity-proof.

Consumers’ shift to digital has been notable for Make Up For Ever. More than 35 percent of its sales are rung up online today, versus around 25 percent pre-pandemic, according to industry sources.

“The brand was naturally very digital,” said Rodriguez, adding its online growth has outpaced the online market’s over the past six months.

Digital tools, such as the shade finder and virtual try-on, have helped drive that. The first allows people to find their foundation shade, suggesting also one lighter and darker. It uses AI drawing from 90,000 people’s skin tones and input from the brand’s makeup artists. Since Shade Finder’s launch in May 2020 worldwide, Make Up For Ever has multiplied by five and sometimes by 10 the conversion rate of triers to buyers.

Virtual try-on is for color cosmetics, such as Rouge Artist and Aqua liners.

“We are working on tools of the future,” Rodriguez said.

Concurrently, Make Up For Ever is focused on a new retail concept, as it keep banking on the importance of brick-and-mortar. In early February, it opened its first door reflecting the new model in Shanghai’s IFC Mall. 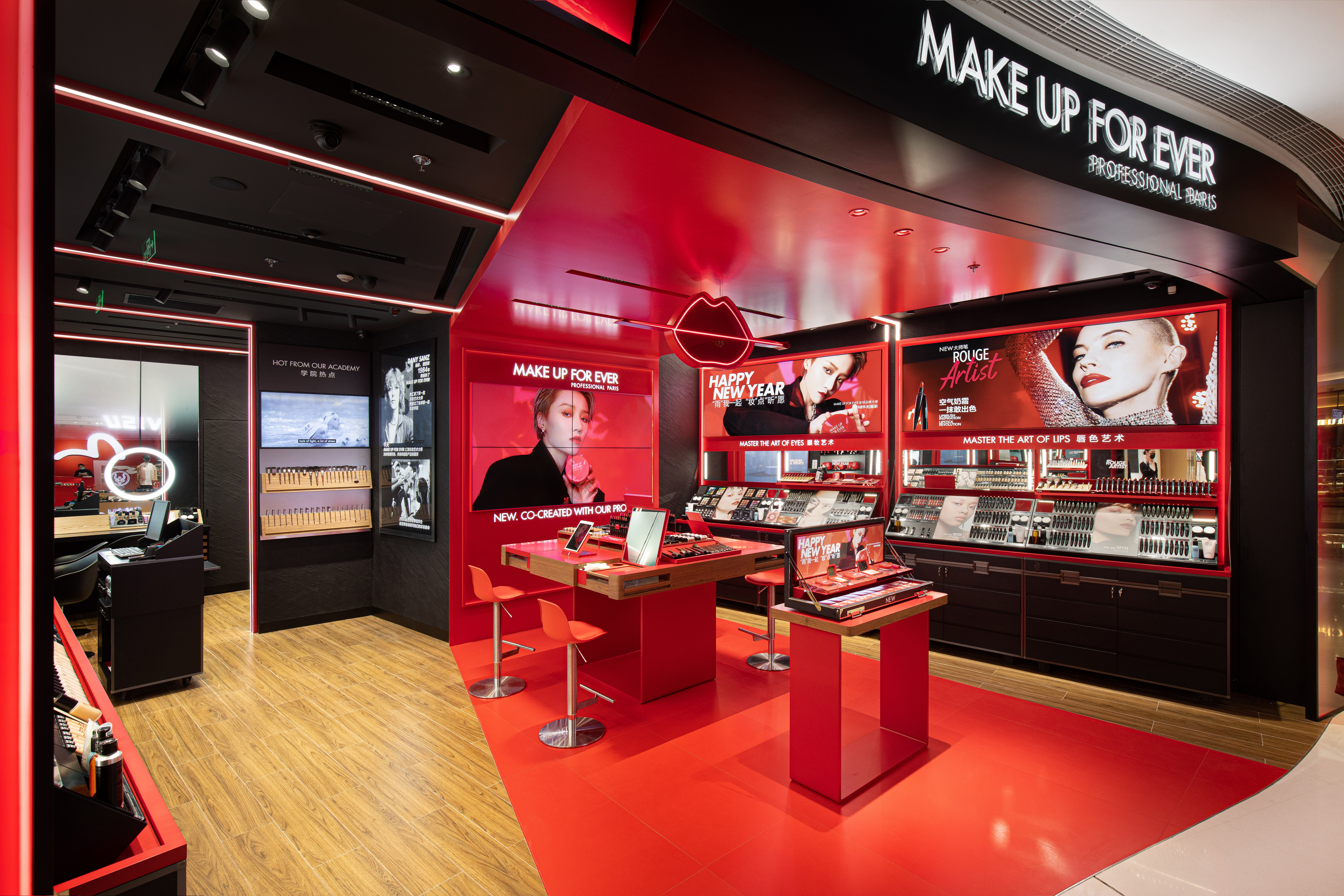 Inside Shanghai’s IFC Mall Courtesy of Make Up For Ever

Make Up For Ever has always had black and red in its color codes and opted with the redesign to play up the red, which Rodriguez called “very feminine and sophisticated.”

There’s more storytelling here, too, including the central “red box,” where launches are spotlighted, and the product catalogues designed as makeup cases that line the walls. One is “master the art of complexion.”

A service table is for product testing and getting makeup artist tips, and there’s another consultation area.

The 430-square-foot store had almost 10-plus percent sell-out growth in the first weeks after opening, even as other makeup sellers in the area were struggling.

“We could really see a drastic impact of the new retail concept that we should roll out in the coming years,” Rodriguez said.

There’s redesigned outer product packaging due to be launched in early 2022. And still, everything goes back to the brand’s roots.

“We always maintain the idea of collective spirit, a high level of energy, super edginess, yet [remain] close to the people — and fun,” Rodriguez said.

Make Up For Ever has, for instance, been using livestreaming. Not too long ago, French influencer Karina Vigier and one of the brand’s makeup artists livestreamed a discussion about the best way for the fortysomethings to use color cosmetics.

“It’s a fantastic moment of interaction with our clients,” Rodriguez said. “We recruit new clients after each livestreaming [session]. And this is exactly the kind of format where we can express our passion for education.”

Meanwhile, new product innovation keeps accelerating; the brand has during the first half of this year launched products including Step 1 Primers and Aqua Brows.

The UHD Setting Powder — with one of the finest powders on the market — is doing very well, ranking first in the Middle East during Ramadan, for example, according to Rodriguez.

Face is Make Up For Ever’s largest category by far, but it’s looking to expand again into makeup, with Rouge Artist Shine up next in September.

The Future of Makeup, According to Anastasia Soare, Sir John Barnett and Laney Crowell