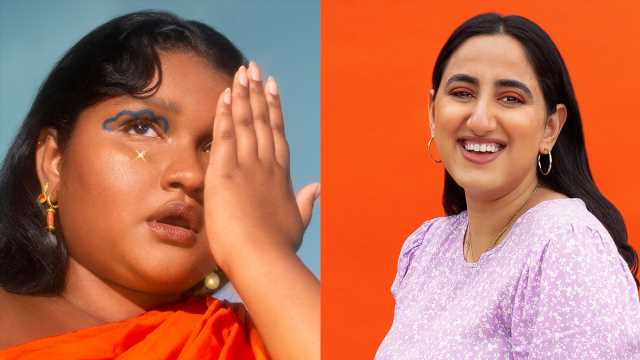 The birth and soon-to-be rise of Kulfi Beauty can be largely attributed to founder Priyanka Ganjoo's desire to change her relationship with makeup into one of fun and self-expression. After all, the brand is named after a traditional, frozen South Asian dessert — known for its colorful appearances and variations — for a reason.

Similar to ice cream in texture, this milky treat is the focal point of some of Ganjoo's happiest and most carefree childhood memories. "That playfulness and nostalgia are what makes Kulfi the perfect name for the brand," she tell Allure. "I want our beauty routines to be touched with the joy you felt when you heard the ice cream truck and ate sweet treats with your friends on a hot summer day."

That's not to say that her brand philosophy necessarily aligned with her experiences growing up. As someone who didn't wear makeup until her early 20s, Ganjoo had plenty of time to acquaint herself with the ways that the patriarchy insisted on labeling makeup as a way to attract men or to look more professional in the workplace. Growing increasingly frustrated with these societal taboos, she made it her personal mission to create a beauty brand that actually empowered herself and fellow South Asians.

But it wasn't until Ganjoo started working in the beauty industry (her résumé is padded with heavyweights, like Estée Lauder and Ipsy) herself that she started to see makeup in this new light. While testing loose glitter eye shadows with her team at Ipsy and subsequently got drenched in pearlescent particles, "I had this 'aha' moment — like, wait, makeup is fun," she recalls.

Around this time, Ganjoo also discovered South Asians are rarely brought into the focus of beauty-related conversations or shown in marketing campaigns and social media — let alone, the difficulties from a business perspective. "It's hard to create change from within because, when you know things are going well and 90 percent of your customer base is being met or served, you're like, 'I don't really care about the 10 percent."

Six years later, she decided to leave the corporate world to focus on making sure future generations of South Asians feel accepted and see themselves represented inside and outside of the beauty industry. And if there wasn't a brand authentically representing her culture and spreading that kind of reaffirming messaging, Ganjoo would start her own. 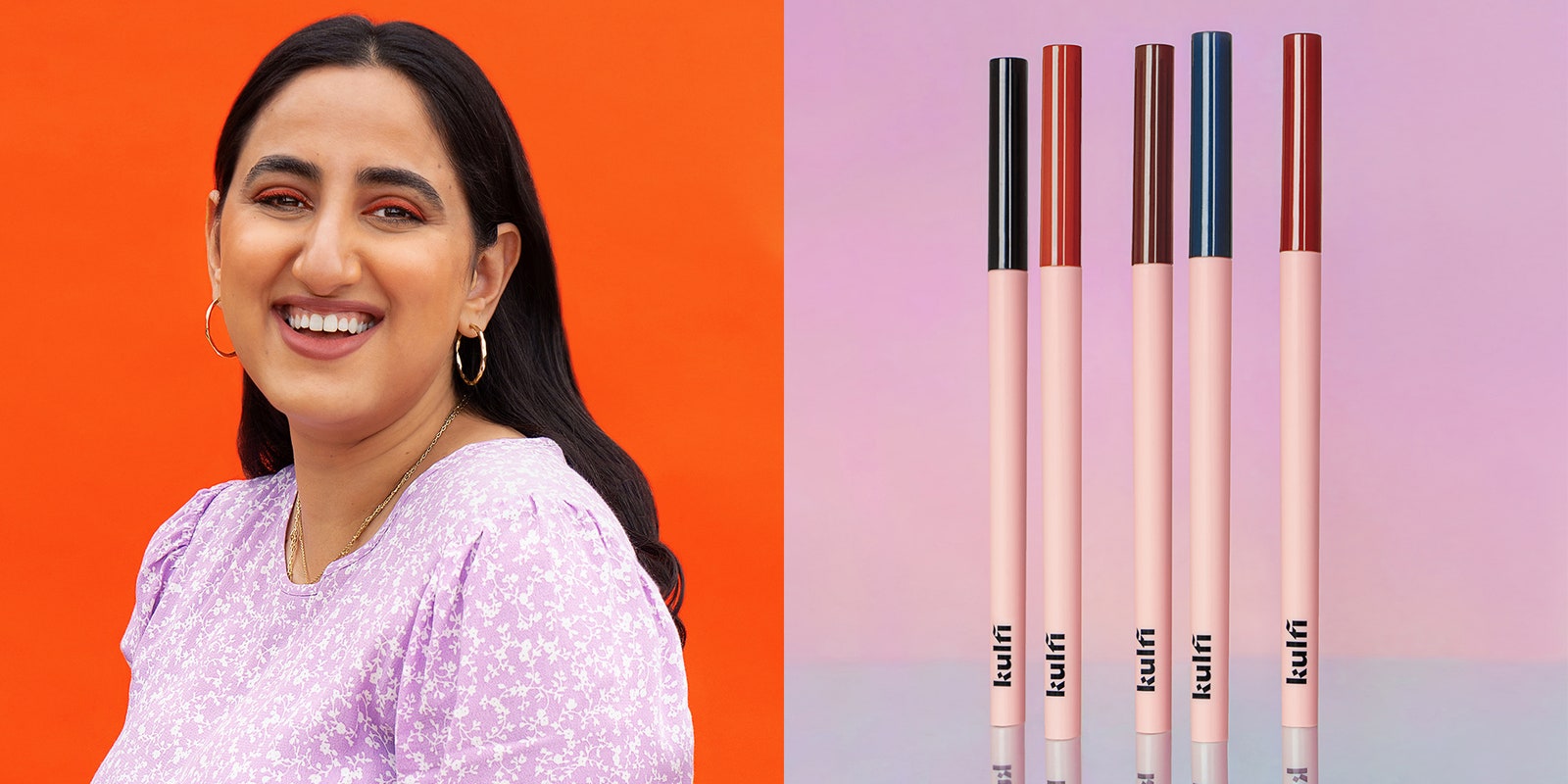 Of course, a brand's story isn't complete without the actual products. Meet Kulfi's first product launch of many: five Underlined Kajal Eyeliners carefully curated to enrich South Asian skin tones. (Note: Despite its official name, "kajal eyeliner" is as redundant as saying "chai tea" or "naan bread," Ganjoo says. Kajal simply is eyeliner, but the latter was added "to be on the safe side from a regulatory standpoint," she adds.)

In fact, "kajal is actually very integral to South Asian culture," Ganjoo says. "Grandmas used to make them in the kitchen by burning [vitamin E-rich] almonds and mixing it with ghee or castor oils to create a thick, creamy paste — but no one has really reinvented them for our generation." She spent about a year perfecting the formula, as kajal "needs to be a very creamy formula and very pigmented with high opacity." Kulfi's version draws from the traditional formula, combining aloe vera extract, safflower seed oil, and a vitamin E complex, to help the initially creamy formula set to rich washes of pigments. That's to say it's easily smudgeable for your classic smoky eyes but doesn't budge once it dries down.

Of the five shades in the debut lineup — Nazar No More (true black), Rain Check (rich brown), Cheeky Chiku (electric blue), Tiger Queen (terracotta), and Purply Pataka (mauve) — Ganjoo points out the last two, in particular, are "great neutrals for our skin tones and undertones." Even black can appear gray on tan and deep skin tones, she notes, which is why Ganjoo formulated Nazar No More to be more "warm-toned and highly-pigmented" for visible definition.

"Nazar No More," by the way, is also Kulfi's tagline for the collection, which centers around redefining beauty on your own terms — rather than through the perspective or gaze of other people. For those unfamiliar, "nazar" is a reference to the evil eye. In India, babies actually have a black kajal drawn on them in order to ward off the nazar, Ganjoo says.

"I didn't grow up feeling beautiful," Ganjoo shares. "The fact that so many other South Asians feel exactly the same way just blows my mind, so that's become the bigger mission for me [with Kulfi]." This "emotional gap," as she eloquently puts it, is what the budding entrepreneur is passionate about bridging. For example, when the reality show Indian Matchmaking premiered on Netflix, Ganjoo told Allure: "The common takeaway was that while the show does offer much needed South Asian representation, it exposes damaging societal standards that South Asians don't often recognize or speak up against."

As a young woman growing up in Delhi, India, where the beauty standards are (still) painfully fixated on the Eurocentric ideals of being fair and thin, Ganjoo as an adult is now hyper-aware of the damaging effects of allowing the status quo to continue. "Instead of challenging these standards, the show reinforces them," she said, referring to issues such as rampant colorism and the $8.6 billion global skin-lightening market.

Yet, Ganjoon lights up when talking about Gen Z, who Kulfi Beauty is aimed towards. "For them, inclusivity is just a baseline," she explains. "Reclaiming our South Asian identity and fighting [western] standards is something that's obvious to them — whereas that's something I, as a millennial, had to learn."

Instead of relying on mainstream media to produce a handful of celebrities and prominent figures that can, as Ganjoo says, "only represent certain personalities or ways of being," Gen Z uses TikTok and Clubhouse to show the world that so much diversity exists in plain sight. "If we can be the brand that helps enable that and provides the space for them to express themselves, that would be amazing," she excitedly adds. 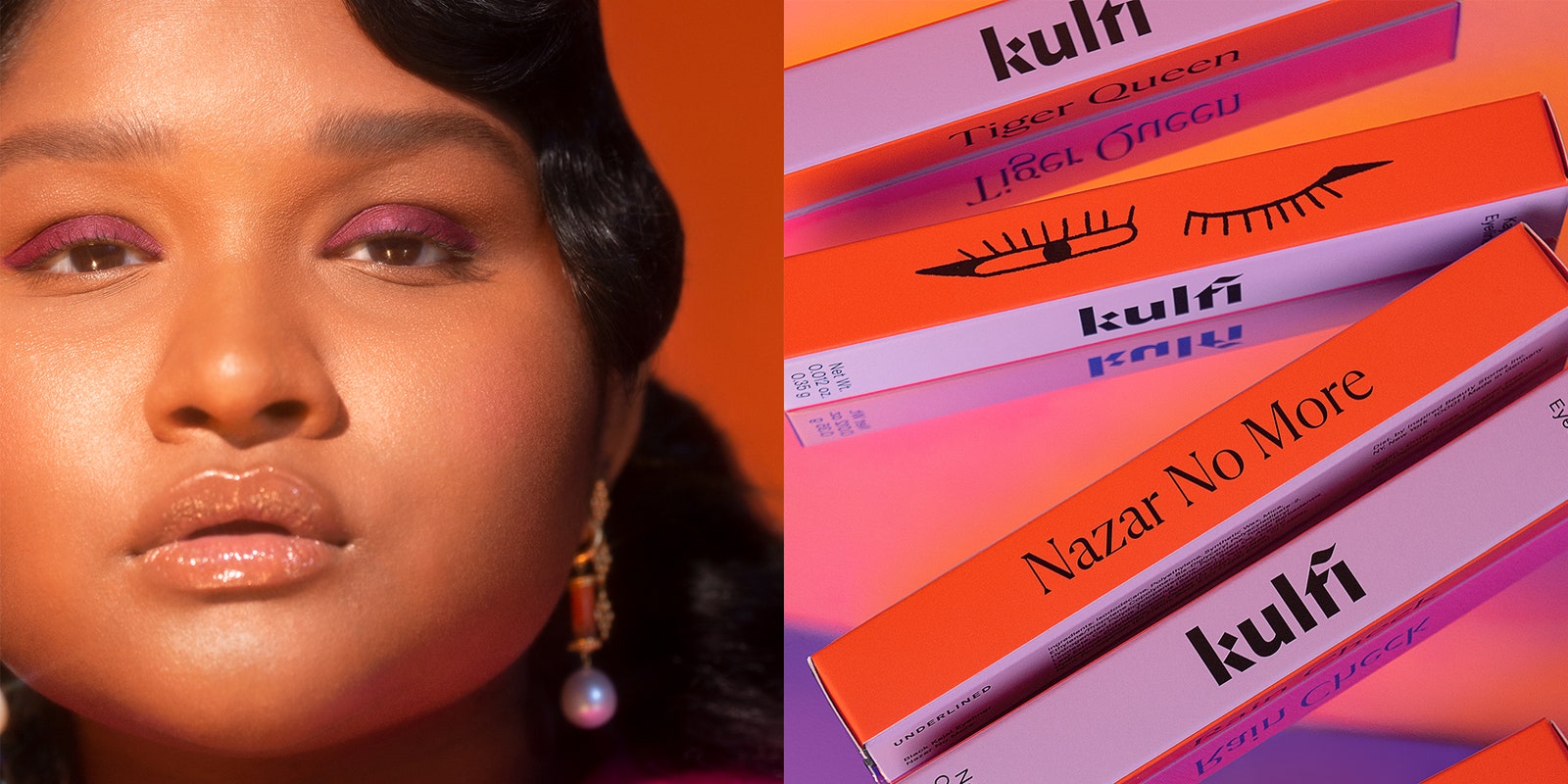 A close-up of the Kulfi Kajal Eyeliner in Purply Pataka (left) and Kulfi’s packaging designed with an evil eye or "nazar."

Developing and testing shades during an ongoing pandemic, which roughly translates to shipping hundreds of samples across the country, was no small feat. As for launching an entire business during this time — due to delayed regulatory work and material shortages for some of the eyeliner caps, Kulfi wasn't able to launch in the second half of 2020 as planned — there is at least one silver lining. "People are looking for community more than ever," Ganjoo shares. "That's definitely given us the advantage to build [one of our own] during this time, and we're even able to make [this community] global."

Although large-scale progress towards a beauty industry that caters to everyone, regardless of skin tone, undertone, or background, is slow-going, Ganjoo remains hopeful. The deeply engaged, Gen Z-heavy following Kulfi has already cultivated leading up to its launch is to thank. The brand tapped into South Asian-centric Facebook groups in its earlier days and has since expanded to Instagram and Twitter, amassing over 3,000 followers to date ahead of any product launches.

"Had I started this brand maybe five years ago, it wouldn't have had the same traction and support that it's enjoying today, which I'm really grateful for," Ganjoo says. [Editor's note: As a true testament to this statement, after our interview, Sephora announced that Ganjoo was one of nine BIPOC founders chosen for the 2021 Accelerate Brand Incubation program.]

Playing with the Kajal Eyeliners are sure to brighten your mood on the millionth work-from-home day in the row. Starting today, February 16, you can shop them at kulfibeauty.com for $20 each.