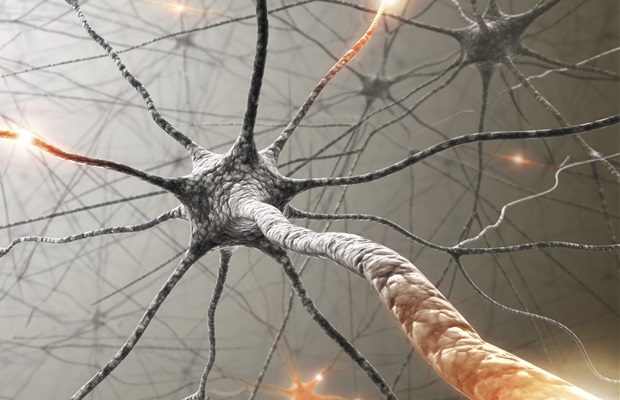 Tau proteins are proteins that perform the function of stabilizing microtubules. These proteins are abundant in nerve cells and are present to a much lesser degree in oligodendrocytes and astrocytes. When Tau proteins become defective and fail to adequately stabilize microtubules, pathologies of the nervous system can develop such as Alzheimer’s disease.

Tau proteins are produced through alternative splicing of a single gene called MAPT (microtubule-associated protein tau). The proteins were discovered in Marc Kirschner's laboratory at Princeton University in 1975.

Tau proteins are mainly active in the distal portions of axons where they stabilize microtubules as well as providing flexibility. The proteins work together with a globular protein called tubulin to stabilize microtubules and aid the assembly of tubulin in the microtubules. Tau proteins achieve their control of microtubule stability through isoforms and phosphorylation. Hyperphosphorylation of tau proteins can cause the helical and straight filaments to tangle (referred to as neurofibrillary tangles). These tangles contribute to the pathology of Alzheimer’s disease.

When a brain affected by Alzheimer’s disease is examined, all six isoforms of tau are often found hyperphosphorylated in paired helical filaments. Deposits of abnormal aggregates enriched with tau isoforms have also been reported in some other neurodegenerative diseases.

Some research suggests that an exosome-based mechanism may be responsible for the release of tau proteins in Alzheimer’s disease. Certain aspects of Alzheimer’s pathology also point at some similarities being shared with prion diseases.