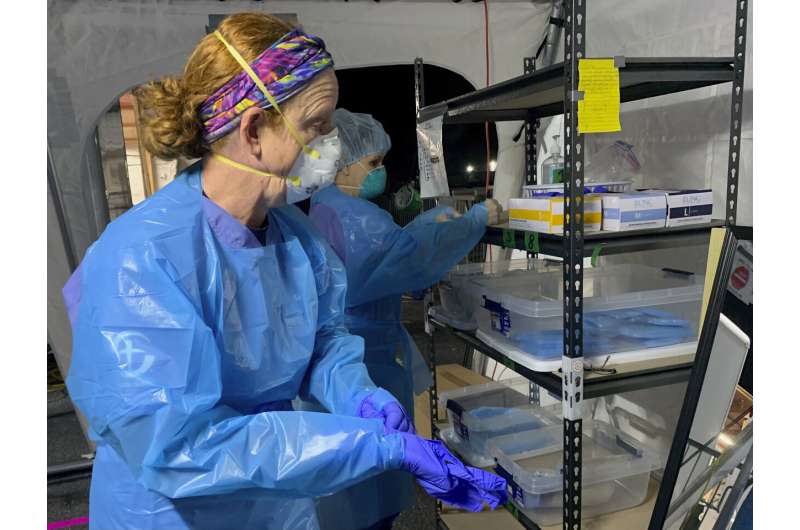 Chris Rutledge peels an N-95 mask off her tired face, revealing the silhouette it leaves behind. Her name and a tiny heart are drawn on the face covering in black marker so her patients know who she is.

“I look terrible when it comes off,” she jokes as she takes a break during her ninth straight day of 12-hour shifts inside a temporary field hospital in Lenoir, North Carolina.

Rutledge, a 60-year-old retired nurse from Lisbon, Iowa, is one of dozens of health care workers who have been treating coronavirus patients inside 11 massive white medical tents set up in the parking lot of Caldwell Memorial Hospital.

The tents became necessary in late December when the virus began surging through this rural community in the Carolina foothills, overwhelming the hospital’s capacity. The tents were set up earlier this month.

“We doubled the number of COVID patients in a matter of days,” said Caldwell CEO Laura Easton, who added that the hospital thought it had seen its cases peak over the summer. “And we doubled our hospital census.”

The tents and care givers have been provided by Samaritan’s Purse, an international Christian relief charity led by evangelist the Rev. Franklin Graham that is based in Boone, North Carolina. The 30-bed field hospital comprises four medical wards and a pharmacy for patients who have been discharged from the hospital’s intensive care unit and do not need ventilators. Four other hospitals besides Caldwell are sending patients here so they can use hospital beds for more serious cases.

“The tent is a scary place for a person that’s never been in it,” Rutledge said, referring to the patients as she washed her hands for the fifth time in just a few minutes. “Some of them are very tearful and some of them are actually sobbing.” 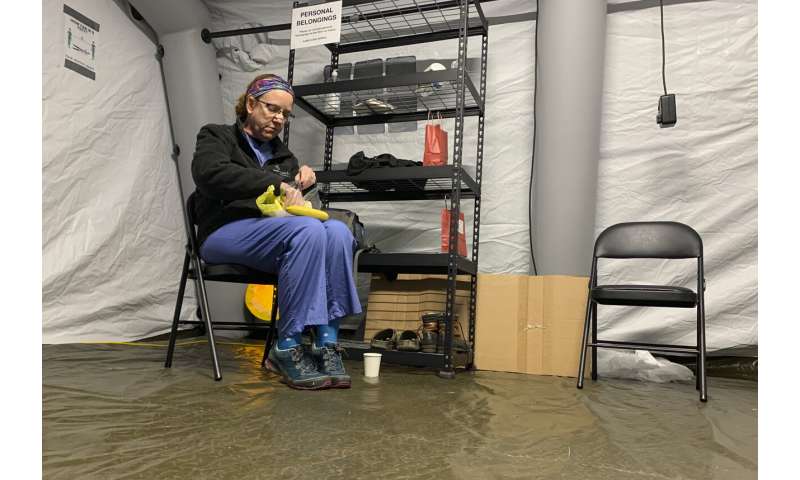 But Rutledge calls her work a blessing. Three years ago, she left her full-time nursing job to join short-term medical missions with Samaritan’s Purse. When the organization mobilizes its Disaster Assistance Response Team (DART), Rutledge can be on a plane within hours.

This is not the first time Samaritan’s Purse has provided aid during the pandemic. The organization, which has partnerships in more than 100 countries, opened its first COVID-19 field hospital on March 16, 2020, in Cremona, Italy, when the virus first began to surge in the U.S. and around the world. Two weeks later, Samaritan’s Purse tents were pitched in New York City’s Central Park, where Rutledge and others on its medical team treated hundreds of patients in partnership with the Federal Emergency Management Agency and the state of New York. The charity also recently erected a field hospital in Lancaster, California.

While the work is physically and emotionally grueling, Rutledge said she has no regrets.

Rutledge is grateful for a supportive husband who cheers her on from their home in Iowa. She said her religious faith sustains her during most of the long days—along with moments of hope that seem to present themselves when she needs them most.

She smiles recalling the elderly couple who celebrated their 49th wedding anniversary while battling the coronavirus together, and how she walked the husband to his wife’s ward to visit. Rutledge said she cried the first time she saw the couple reunited. She wept again when they were cleared to go home, virus-free.