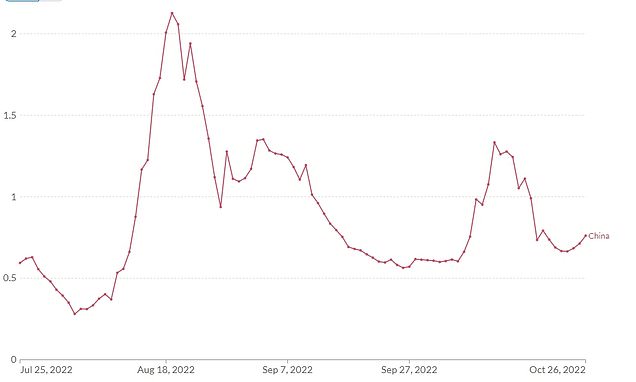 The Chinese city at the heart of the Covid pandemic has been plunged back into lockdown.

More than 800,000 people in Wuhan have been told to stay at home until the end of the week.

Authorities have reintroduced the draconian restriction even though the city is only recording 25 cases a day.

At least 200million people in 28 cities across China are living under lockdown curbs, such as stay-at-home orders, mass testing and shop closures.

The strict return to draconian rules comes after the country logged 1,000 cases today for the third day in a row — a tiny figure by other countries’ standards.

China’s ‘zero-Covid’ approach has seen it plagued by aggressive restrictions throughout the year, which has left people quarantined for months at a time.

It continues to remain an outlier nearly three years since Covid first swept the world, after other nations worldwide lifted restrictions months ago. 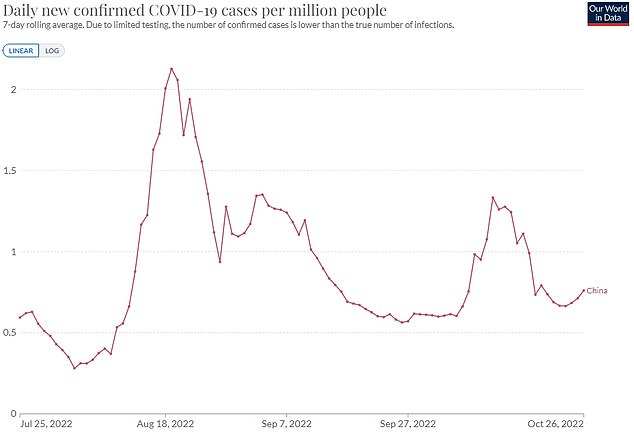 Wuhan, where Covid was first detected in late 2019, logged 20 to 25 new infections per day this week. Statistics from Oxford University research platform Our World in Data show that China logged 1,412 infections on October 26, up 51 per cent in a week (shown in graph) 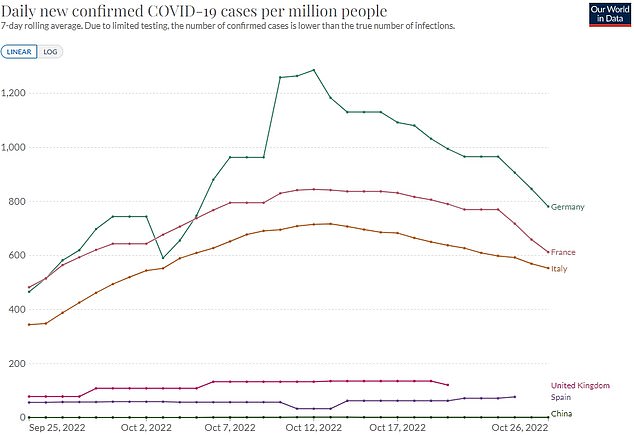 China’s outbreak is tiny in comparison to its 1.4billion population. Just 0.76 cases are being logged per million people. For comparison, European nations are living restriction-free despite recording hundreds of cases. Rates are highest in Germany (781), followed by France (612) and Italy (553) (shown in graph) 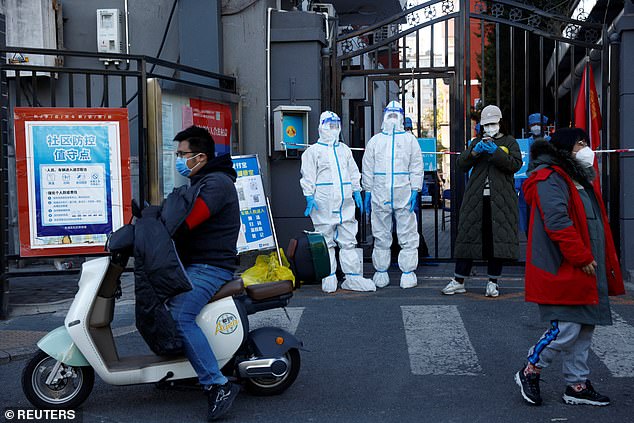 At least 208million people in 28 cities across China are thought to be living under pandemic-era curbs, such as stay-at-home orders, as well as shop and gym closures. Pictured: Security staff in protective suits stand at the gate of a residential compound that is under lockdown in Beijing on October 22 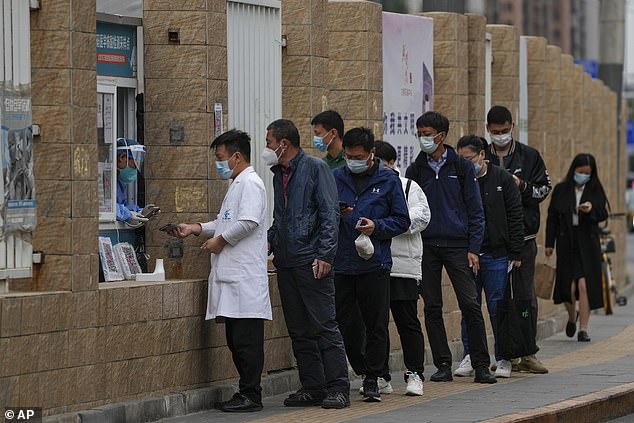 In Beijing, the Universal Resort theme park was shut on Wednesday after one visitor tested positive for the coronavirus. Pictured: Residents wearing face masks line up to register to get their routine Covid swabs at a testing site in Beijing on October 27

Dec 8, 2019 – Earliest date that China has acknowledged an infection

Jan 9 – China makes public the genome of the coronavirus

Statistics from Oxford University research platform Our World in Data show that China logged 1,412 infections on October 26, up 51 per cent in a week.

However, the figure is tiny in comparison to the nation’s 1.4billion population. It means just 0.76 cases are being logged per million people.

For comparison, European nations are living restriction-free despite recording hundreds of cases. Rates are highest in Germany (781), followed by France (612) and Italy (553).

The UK is registering around 120 positive tests per million people, while rates are similar in the US (108).

However, the figures are highly swayed by how many people are being tested in each country per day — with nations that test fewer people reporting fewer cases.

As of October 24, people in 28 cities were subject to varying degrees of lockdown measures.

Wuhan, where Covid was first detected in late 2019, logged 20 to 25 new infections per day this week.

In response to the tiny case numbers, local authorities ordered more than 800,000 people in one district to stay at home until Sunday.

One Wuhan resident said: ‘I don’t know what to do. If we can still survive living like this then I suppose that’s what we’ll do.

‘When we see these news stories about Covid, we now feel a bit numb. We feel numb to it all. We feel more and more numb.’

Officials have also banned the sale of pork in parts of the city, according to images and posts on social media, after one case was linked to the local pork supply chain.

A wet market in the city is thought to be the source of the Covid outbreak. Several workers and shoppers at the Huanan Seafood Market came down with the mystery flu-like virus.

However, some believe the virus leaked from the nearby Wuhan Institute of Virology, which was working extensively on bat coronaviruses at the time.

People were told to stay in their homes as new parts of the city were deemed high-risk in a Covid resurgence that is now in its fourth week.

Lily Li, 28, who lives in Guangzhou, said: ‘Many of my friends and co-workers have been under lockdown at home.

‘The situation is still unstable. Many places are under lockdown.

‘Classes have stopped and entertainment venues have been suspended too. The gym that I often go to has also been closed.’

Meanwhile, social media posts suggested that there are food shortages and rising prices for essential goods in Xining, the capital of Qinghai province.

The bounce-back in cases comes after a week-long National Day holiday in early October.

A Xining government official yesterday said: ‘To reduce the risk of transmission, some vegetable and fruit stores have been closed and put under quarantine.’

Other large cities across China including Zhengzhou, Datong and Xian have implemented new curbs this week to rein in local outbreaks.

In Beijing, the Universal Resort theme park was shut on Wednesday after one visitor tested positive for the coronavirus.

China has repeatedly vowed to stick to its zero-tolerance response to Covid and implement what the authorities say are necessary measures to contain the virus.

Beijing resident Wen Bihan, 26, who has previously been isolated at quarantine facilities on two occasions, said: ‘Once there’s a case somewhere, and then you become a close contact, you’ve got to be in quarantine. It’s nerve-racking.’