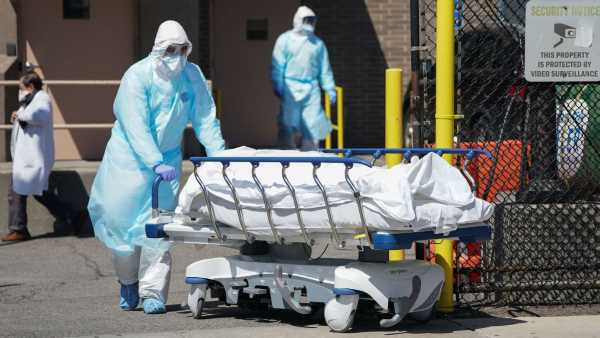 Even after death, COVID-19 could be contagious, a new report finds.

A forensic practitioner working in Bangkok, Thailand, most likely caught the virus from a deceased patient, according to the report, which was posted online April 11 as a preprint for the Journal of Forensic and Legal Medicine.

The forensic practitioner later died of the virus, marking the first case on record of a “COVID-19 infection and death among medical personnel in a forensic medicine unit,” the researchers wrote in the report.

At the time the report was written on March 19, just 272 people in Thailand — including the forensic practitioner and a nurse assistant — had tested positive for the new coronavirus. Most of these cases were imported, meaning they weren’t from community spread, the researchers wrote. So, it’s unlikely that the forensic practitioner caught the new coronavirus outside of work or even from a patient at the hospital, the researchers wrote.

“There is [a] low chance of forensic medicine professionals coming into contact with infected patients, but they can have contact with biological samples and corpses,” the researchers wrote in the report.

“Absolutely, a dead body would be contagious at least for hours if not days,” Yang told Live Science in an email. “The virus will still be in respiratory secretions, and potentially still reproducing in cells that haven’t yet died in the lungs.”

COVID-19’s longevity in the body can be problematic for people in the funerary industry. For instance, following reports that temples in Thailand were refusing to perform funeral services of COVID-19 victims, the head of Thailand’s Department of Medical Services incorrectly announced on March 25 that the disease was not contagious in bodies after death, according to Buzzfeed News.

It’s unclear, however, just how long the virus remains infectious in a dead body.

In light of this finding, forensic scientists should take a number of precautions while examining the remains of COVID-19 patients, the researchers said. For instance, forensic professionals should wear protective gear, including a protective suit, gloves, goggles, a cap and a mask, they wrote.

“The disinfection procedure used in operation rooms might be applied in pathology/forensic units too,” they added.

Usually, pathogens that kill people don’t survive long enough to spread to others after the person’s death, according to the World Health Organization (WHO). “Human remains only pose a substantial risk to health in a few special cases, such as deaths from cholera or haemorrhagic fevers,” such as Ebola, the WHO said.

Other illnesses that are contagious in human remains include tuberculosis, bloodborne viruses (such as hepatitis B and C and HIV) and gastrointestinal infections (including E. coli, hepatitis A, Salmonella infection and typhoid fever), according to the WHO.

For a limited time, you can take out a digital subscription to any of our best-selling science magazines for just $2.38 per month, or 45% off the standard price for the first three months.View Deal