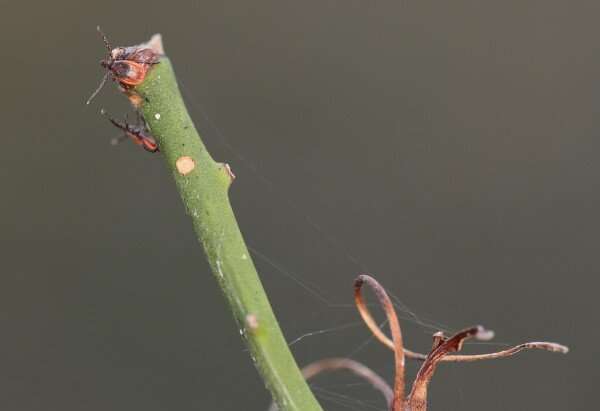 If you’re a hiker or just love the outdoors, fall is probably your favorite season. Temperatures are cooler but still warm enough, days are still long, and for the most part, bugs are less of a pest.

But as you get ready to head out, University of Rhode Island entomologist Tom Mather wants you to know something: This is also the season for adult blacklegged ticks, or deer ticks. They’re exploding on the scene and more than 50% carry the germ for Lyme disease. But luckily, unlike in the tick’s nymph stage, the adults are large enough to see.

“What people need to remember is there’s a seasonality to most of nature, including ticks,” says Mather, director of the Center for Vector-Borne Disease and the TickEncounter Resource Center. “Every type of tick has a slightly different season. In this case—adult blacklegged ticks—their season is October and November. That’s when they first come out. They’re at their freshest and their hungriest.”

Mather, aka the TickGuy, is a veteran of almost four decades of hunting and researching ticks, and educating and helping the public protect itself from the blood suckers. But, he says, many people mistakenly think tick season ends when fall hits.

“Most people are quite surprised,” he says. “You could do a survey: Most people think ticks die when it gets cold. It’s a surprise that October and November are actually the fifth and sixth ‘tickiest’ months of the year.”

The tick situation in Rhode Island and New England this year has been moderate, Mather says. Summer’s drought probably curtailed nymph-stage ticks and may have prevented many of them from getting the blood meal ticks need at each stage of their lifecycle (larva, nymph and adult).

“That could mean there will be fewer adult stage ticks. But we’ve been surprised in the past,” he says. “I struggled at many of my regular sites to find nymphs this year. But there were a few sites, especially along the south coast, that had an exceptional number of nymph ticks.”

Adult blacklegged ticks are just now starting to become active in Rhode Island, in just the past week, crowdsourced reports of adult deer ticks have come from Ontario, Vermont, Massachusetts and West Virginia, according to data collected from the TickEncounter’s TickSpotters program. TickSpotters allows people from all over to upload photos of ticks that they’ve picked off themselves or their pets and get a quick tick ID check and a risk assessment, while the crowdsourced information provides data to assess tick population trends.

“The first one we got through TickSpotters was Sept. 23 from way up in Vermont,” Mather says. “We haven’t seen any in Rhode Island just yet, but I’m sure they’ll start coming any day now.”

While there are about nine species of ticks encountered in Rhode Island, and across the U.S., the most prevalent are blacklegged ticks (or deer ticks), lone star ticks and American dog ticks. Their lifecycles overlap somewhat, with stages of each most active at different times.

For example, May, the “tickiest” month of the year, has the greatest diversity of ticks. Adult deer ticks that didn’t feed in the fall may still be active, along with deer tick nymphs, and adult dog ticks and lone star ticks being most active. Lone star tick nymphs are also around in May. But their seasons come to an end. Late August and September are pretty quiet when it comes to ticks, and that lulls people into thinking tick “season” is over, Mather says.

And those adult deer ticks you encounter in your trek through the woods started their lifecycle in spring of 2021. The larvae hatched that June—from eggs laid by adult ticks that fed the previous fall and that survived through the winter. After being active in July and August, the larvae detached from their host, made it through the winter and became nymphs this past spring.

Nymphs fed in May, June or July, detached, and through a process called molting, transformed into this fall’s adults. One out of two (or more) adult stage deer ticks carry the germ for Lyme disease—compared with about one in four of the nymph-stage deer ticks earlier in the year. The reason is, the adult stage has had two opportunities to feed and pick up the germs for Lyme from rodents, mainly white-footed mice. They can also pick up germs for babesiosis, anaplasmosis, a relapsing fever disease, and Powassan virus.

Adult blacklegged ticks will be active this fall until the temperature stays consistently cold—not disappearing at the first hard frost. The first frost usually comes between Oct. 10 and 20, says Mather, and after that the numbers of adult ticks actually soar until about Thanksgiving.

“By then, it’s getting routinely cold enough to keep them from being active,” he adds. “It has to be sustainably cold because if it is below freezing overnight but 40 degrees the next day, these ticks will be out.”

Until the cold weather sets in to stay, the center’s TickSmart webpage has numerous ways to help you and your pet stay safe from ticks—including how to prepare to go out into nature, what to do after to check for ticks, and how to remove them.

Along with the website, TickEncounter is taking prevention to the woods to give you on-the-spot tips, or “just-in-time” learning, as Mather calls it. Starting in the summer, about 400 signs—”Warning: Tick Habitat”—have been distributed and posted at trailheads. Signs have gone up at Rhode Island Land Trust trails and in communities such as North Kingstown and South Kingstown.

The signs have a QR code to give people venturing into nature immediate information—such as three things they can do right there at the trailhead to reduce their chances of bringing home a tick. (There are also stickers being distributed that provide a QR code with tips to protect your pets.)

“You can have tick expert advice ‘just in time’ telling you exactly what you probably need to know right now—if you just scan the code,” Mather says.