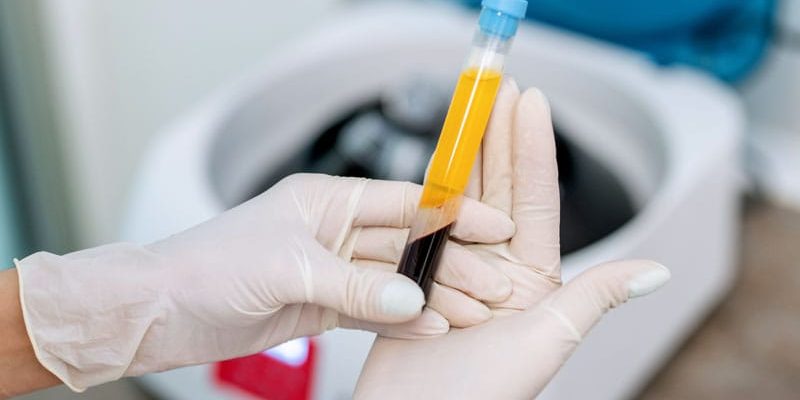 DENVER — Vision loss is a rare but potentially devastating complication of platelet-rich plasma (PRP) injections, results from a systematic review showed. None of the cases involved scalp injections.

“Both soft tissue fillers and [PRP] are common injection-type treatments that dermatologists perform on the head and neck area,” lead study author Sean Wu, MD, said in an interview in advance of the annual meeting of the American Society for Dermatologic Surgery, where he presented the results during an oral abstract session. “Fillers are usually used to replace volume and fill in lines while PRP is usually used for skin rejuvenation and certain forms of hair loss. We know that fillers may rarely cause blindness if accidentally injected into a facial artery.”

Certain facial areas such as the glabella, nose, and forehead are considered high risk for blindness with filler injections. But whether PRP injections in those areas may also result in blindness is not yet known, so Wu and his colleagues, Xu He, MD, and Robert Weiss, MD, at the Maryland Laser, Skin, and Vein Institute in Hunt Valley, Md., performed what is believed to be the first systematic review of the topic. In January 2022 they searched the PubMed database, which yielded 224 articles from which they selected four for full review. The results were recently published in Dermatologic Surgery.

Collectively, the four articles reported a total of seven patients with unilateral vision loss or impairment following PRP injection. They ranged in age from 41 to 63 years. Skin rejuvenation was the indication for PRP injection in six patients and temporomandibular joint (TMJ) disorder in one. Three of the cases occurred in Venezuela while one each occurred in the United States, the United Kingdom, and Malaysia. All patients had signs of arterial occlusion or ischemia on retinal examination or imaging.

Wu and colleagues found that the glabella was the most common site of injection associated with vision loss (five cases), followed by the forehead (two cases), and one case each in the lateral canthus, nasolabial fold, and the TMJ. In all but two cases, vision loss occurred immediately after injection. (The number of injections exceeded seven because two patients received PRP in more than one site.)

Associated symptoms included ocular pain, fullness, eyelid ptosis, headache, nausea, vomiting, dizziness, tinnitus, and urinary urgency. At their initial ophthalmology evaluation, six patients had no light perception in the affected eye. Only one patient reported recovery of visual acuity at 3 months but with residual deficits on eye exam. This person had been evaluated and treated by an ophthalmologist within 3 hours of symptom onset.

“The other cases reported complete blindness in one eye,” Wu said. “There is no reversing agent for PRP, unlike for many fillers, so there is no clear-cut solution for this issue.”

Based on the results of the systematic review, Wu concluded that blindness is a rare complication of PRP. “We should take the same precautions when injecting PRP on the face as we do when injecting fillers,” he advised. “This may include not injecting in high-risk areas and aspirating prior to injection to make sure we are not accidentally injecting into an artery.”

It was “notable,” he added, that no cases of blindness occurred following scalp injections of PRP for hair loss, indicating “that this use of PRP is likely very safe from a vision loss standpoint.”

Wu acknowledged certain imitations of the analysis, including the low quality of some case reports/series. “There is a notable lack of detail on the PRP injection technique, as the authors of the case reports were generally not the PRP injectors themselves,” he said. “There was also no attempt at treatment in a series of four cases.”

Asked to comment on the review, Terrence Keaney, MD, founder and director of SkinDC, in Arlington, Va., said that the analysis underscores the importance of considering blindness as a possible side effect when injecting PRP into the face. “Using techniques that can minimize intravascular injections including the use of cannulas, aspiration, and larger needle size may help reduce this rare side effect,” said Keaney, a clinical associate professor of dermatology at George Washington University, Washington.

“It is important to recognize the lack of cases of blindness when injecting the scalp, one of the most popular PRP injection locations. This reduced risk may be due to the reduced communication between the scalp vasculature and the ophthalmic vasculature,” he added.

The study authors reported having no financial disclosures. Keaney disclosed that he is a member of the advisory board for Crown Aesthetics.