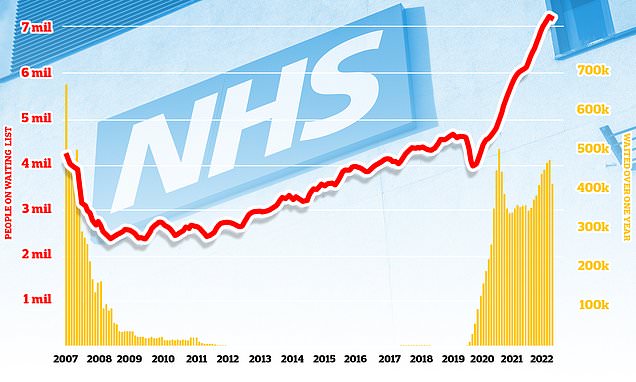 The waiting list for routine NHS ops has fallen for the first time since the pandemic began.

Yet roughly one in eight people (7.19million) are still stuck in the massive backlog for procedures like hip and knee replacements.

And 40 per cent have been there for at least 18 weeks.

Under the NHS’s own rulebook, all patients have the right to be treated within that time-frame. 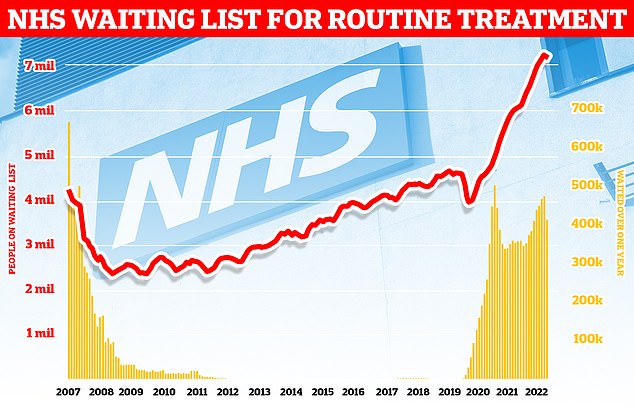 More than 7.2million patients in England were stuck in the backlog in October (red line)— or one in eight people. More than 400,000 have queued for at least one year (yellow bars)

Queues for ops have soared since Covid took off, with the pandemic and its knock-on effects forcing hospitals to re-prioritise efforts.

Ministers warned the waiting list wouldn’t start to shrink until 2024, despite plans to get a grip on spiralling queues.

But performance data released today, by NHS England, shows the overall list fell by around 70,000 in November.

It reflects the month before NHS strikes began, though.

Experts have warned about the potential knock-on consequences of the winter walk-outs, which began in December and could rumble on until spring.

Sir Stephen Powis, NHS England’s national medical director, said: ‘As staff responded to record A&E attendances, 999 calls and emergency ambulance call outs as the “twindemic” lead to unprecedented levels of respiratory illness in hospital, they also continued to deliver for patients with more people than ever before receiving diagnostic tests and cancer treatment.

‘These figures show just how hard our staff are working, not only in the face of extreme pressure but also in bringing down the Covid backlogs and checking more people for cancer than ever before in one month.

‘The NHS will keep its foot on the accelerator to continue to make progress on the Covid backlog and hospitals have today been asked to ensure anyone waiting longer than 18 months has their treatment booked in before March. 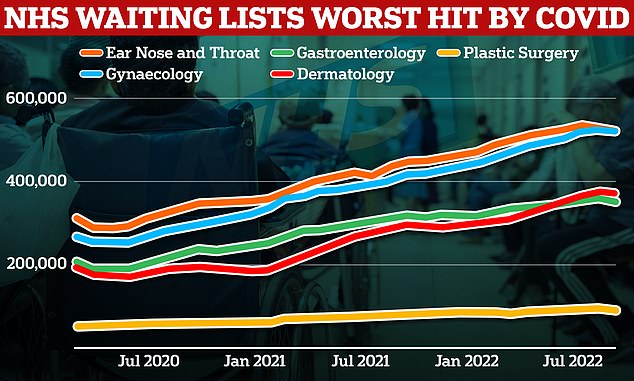 MailOnline analysis of NHS England figures show the rise in the backlog has disproportionately hit some medical areas — with the number in the queue for gynaecology and dermatology treatment almost doubling since the pandemic began. The number of patients waiting for plastic surgery, gastroenterology and ear, nose and throat treatment also jumped by up to 74% 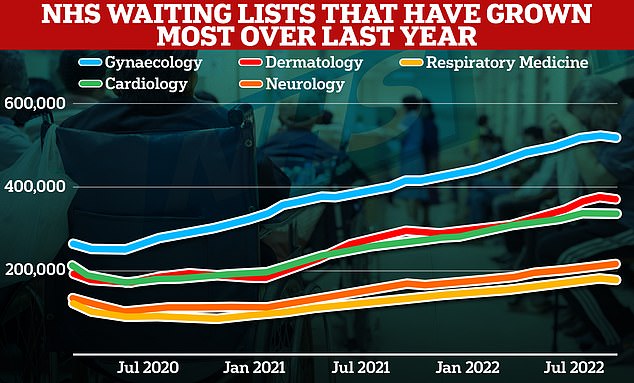 Meanwhile, looking at the latest 12 months, other medical areas have seen the biggest spike in their backlogs. The number of respiratory medicine patients queuing surged 33 per cent, while backlogs in neurology, dermatology, cardiology and gynaecology jumped by up to 29% 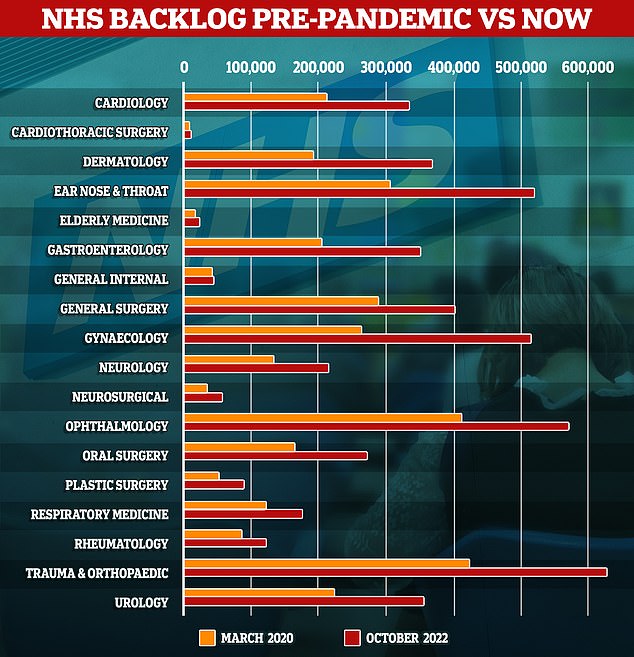 The graph shows the number of people queuing for treatment by medical area in March 2020 (orange), when Covid first hit, compared to latest data from October 2022. Gynaecology, dermatology and plastic surgery saw the biggest rises in backlogs

‘While services continue to be pressured, it’s important the public continue to play their part by using the best services for their care – using 999 in an emergency and otherwise using 111 online and by getting their vaccinations if eligible.’

More than 400,000 people in England are thought to have waited at least a year for hospital treatment, according to the figures.

This is down from by around 10,000 on the figures at the end of October.

The Government and NHS England have set the ambition of eliminating all waits of more than a year by March 2025.

Meanwhile, 1,423 people in England are estimated to have been waiting more than two years to start routine hospital treatment at the end of November.

The Government and NHS England set the ambition to eliminate all waits of more than two years by July 2022, except when it is the patient’s choice or for complex cases requiring specialist treatment.

In his first major speech of 2023, Rishi Sunak pledged to bring down NHS queues. He promised: ‘People will get the care they need more quickly.’

Yet health leaders attacked the PM for being ‘short on detail about how this will be achieved’.

NHS bosses are already rolling out virtual wards across England, in a bid to free up beds in packed hospitals and get more patients treated.

The Government is also spending up to £200m to buy beds in care homes, hotels and hospices, to make even more space by allowing medically-fit patients to be discharged quicker.

As well as disrupting efforts to tackle the backlog, the NHS’s bed-blocking crisis — thought to cost taxpayers £2bn a year — plays a huge role in the dire emergency care situation.

Why IS the NHS struggling this winter?

Some 12,000 hospital beds across the country — roughly one in seven — are currently filled with patients declared fit for discharge.

The figure is triple the pre-pandemic average.

Experts say numbers are being driven by a crisis in social care, leaving patients left to languish on wards for up to nine months because there is no suitable nursing accommodation or care available for them in the community.

The lack of beds has seen ambulances stuck in queues for 20 hours outside of hospitals this summer, as emergency medics scramble to find beds for patients. This has had a knock-on effect on response times.

The NHS, which employs over a million people, has around 130,000 vacancies across its entire workforce in England.

This reduces productivity, with fewer staff to carry out appointments and procedures.

Health chiefs also warn that it stops staff from delivering high-quality care as they rush between patients, and can lead to safety concerns if too few staff are working.

In turn, medics are at a higher risk of burnout, illness and early retirement due to these factors.

Flu has surged in recent weeks, with over 4,000 beds per day being taken up by hospital admissions for the virus in the week to December 25.

Sickness from seasonal winter bugs not only increases demands on the NHS but also damages its capacity.

This is due to staff falling ill with the bugs themselves which prevents them from working.

NHS staff sickness has surged recently with 63,000 staff missing work per day in the week running up to Christmas Day.

Over 30 children in the UK have died in so far this winter due to an ongoing outbreak of Strep A.

The bacterial infection is harmless for the vast majority. But it can cause life-threatening illness if the bacteria invade the blood, muscles or lungs.

Doctors have warned that A&E, GPs and ambulances are in meltdown due to a surge in demand from parents worried that their child is infected.

Patients have faced longer emergency department waits, while some hospitals have postponed routine procedures to cope with demand.

Around 7,700 beds per day were occupied by a patient infected with Covid in England in the week to December 18.

Two-thirds are primarily admitted for another ailment, such as a broken leg, but happen to test positive.

However, infected patients still pile pressure on the health service as they have to be isolated from others.

The virus also contributes to higher rates of staff sickness.

Campaign groups, MPs and senior medics say desperate patients are turning to emergency and walk-in services because they can’t get a face-to-face appointment with their GP.

In the areas with poorest access, up to 2,600 patients are fighting over one family doctor.

The Royal College of Emergency Medicine (RCEM) has previously warned difficulties in seeing a GP was leading to a crisis in emergency departments.

In other related health news…