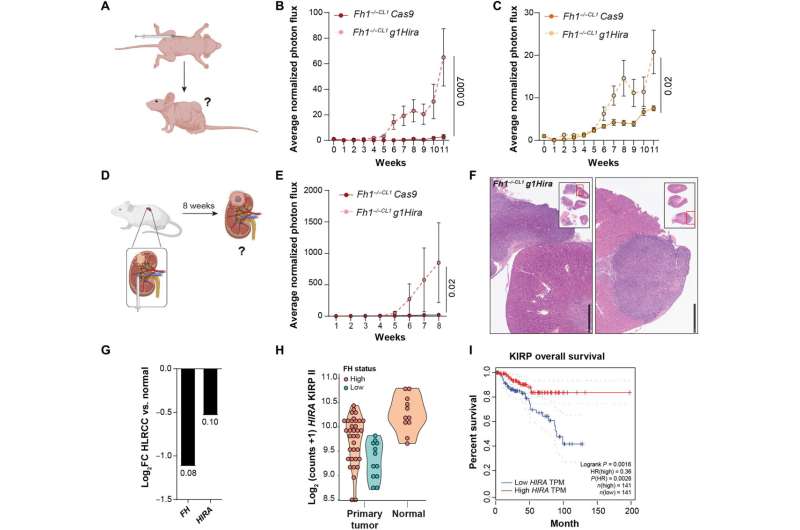 Deletion of the HIRA protein promotes the proliferation and invasion of tumor cells in cell culture and animal models. That is the result of a research endeavor led by Alexander von Humboldt Professor Dr. Christian Frezza at the University of Cologne.

The hereditary leiomyomatosis and renal cell carcinoma syndrome (HLRCC) is based on a change in the gene that produces the protein fumarate hydratase (FH). Fumarate hydratase is a cell protein that is significantly involved in energy production in cells. However, the mutation in the gene alone does not lead to the disease.

Other factors such as the reduced production of HIRA are necessary for cancer to develop, which the scientists discovered with the help of CRISPR/Cas9 screening in cells. The research, which was started at the MRC Cancer Unit of Cambridge University and completed at the CECAD Cluster of Excellence for Ageing Research at the University of Cologne, has now been published in Science Advances.

“Based on these new mechanistic findings, a model for HLRCC kidney tumors can be developed that opens up new perspectives for targeted therapies,” said Dr. Lorea Valcarcel, first author of the study.

In addition to the laboratory experiments, the scientists demonstrated a reduction in FH and HIRA proteins in affected HLRCC patients compared to samples from healthy individuals. Down-regulation of HIRA is also further confirmed by tumor biopsies from two patients compared to the normal surrounding tissue.