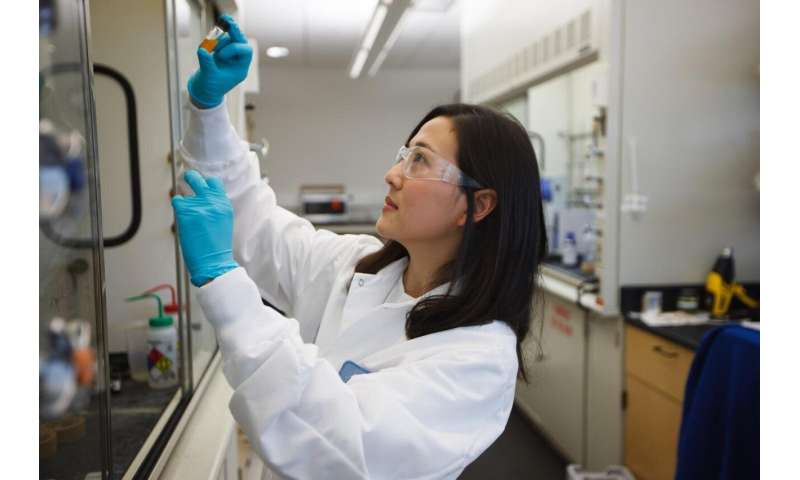 Human cells are encased by a membrane coated with diverse sugar molecules known as glycans. These glycans play many roles in health and disease, making them important to understand. Due to their unique properties, however, scientists have had limited tools to study them and their interactions in the body.

New research from the lab of biochemist Mia Huang, Ph.D., an assistant professor at Scripps Research in Jupiter, Florida, presents a strategy for capturing elusive interactions among glycans and their protein activators in live human cells. Huang and her colleagues applied the technique to improve understanding of liver disease and immune activation.

Writing in the journal the Proceedings of the National Academies of Sciences on Friday, Huang and colleagues focus on a glycan-binding protein called galectin-3. Collaborating with the lab of Scripps Research chemist Chris Parker, Ph.D., the team was able to catalog galectin-3’s array of receptors by combining two strategies: proximity labeling and quantitative proteomics.

In the process, they discovered hundreds of galectin-3 interactors in live liver stellate cells and immune cells.

“These interactions escape traditional query because of their weak affinity and dynamic binding events,” Huang says. “Our findings will empower our ability to approach, and hopefully treat, diseases based on glycosylation-mediated events, especially liver fibrosis and autoimmune disorders.”

Cells communicate with each other through the release of molecular signals. These signals, such as galectin-3, can activate the inflammatory response following viral infection, or generate a buildup of scar tissue following injury, for example.

At the biochemical level, for this to happen, a glycan-binding protein must attach to its membrane receptor like a fisherman’s line hook wading through thick kelp to find its catch. Characterizing which hooks fit which glycoproteins is a necessary step to addressing the root causes of many illnesses, Huang says.

A graduate student in Huang’s lab, Eugene Joeh, devised a chemical fishing expedition to search for galectin-3. Joeh, a student in Scripps Research’s Skaggs Graduate School of Chemical and Biological Sciences, suggested tethering an enzyme called APEX2, chosen for its relatively small size and ability to stay active both inside and outside the cell, to the galectin-3 molecules. He then allowed the paired molecules to freely diffuse onto cells. Next, he added the chemicals biotin phenol and hydrogen peroxide to create highly reactive tags that label the binding complexes so that they could be more easily identified and characterized. He was helped by a participant in the institute’s high school internship program, Kenan Fellow Jonathan Hung, a student at Suncoast High School at the time of his internship, now a freshman at Johns Hopkins University.

Liver fibrosis and beyond

The liver plays many roles. It processes nutrients and medicines absorbed through digestion. It clears toxins, breaks down alcohol, and stores or releases fats and sugars during times of plenty or scarcity. It makes bile to help digest fats. Over time, injury to the liver from conditions such as alcoholism, autoimmune disease, drug abuse, or viral hepatitis, can lead to a condition called liver fibrosis. This can cause chronic high blood pressure, cirrhosis or even liver failure.

This signal, galectin-3, isn’t only a force to consider in liver fibrosis. It also plays an important role in other cells—especially those in the immune system that help defend against infections, cancer and poisons, Huang says.

“It is noteworthy that several of these proteins are important in both the innate and adaptive immune responses,” Huang says.

The discovery of so many galectin-3 receptors raises many new questions, she adds. The work continues.