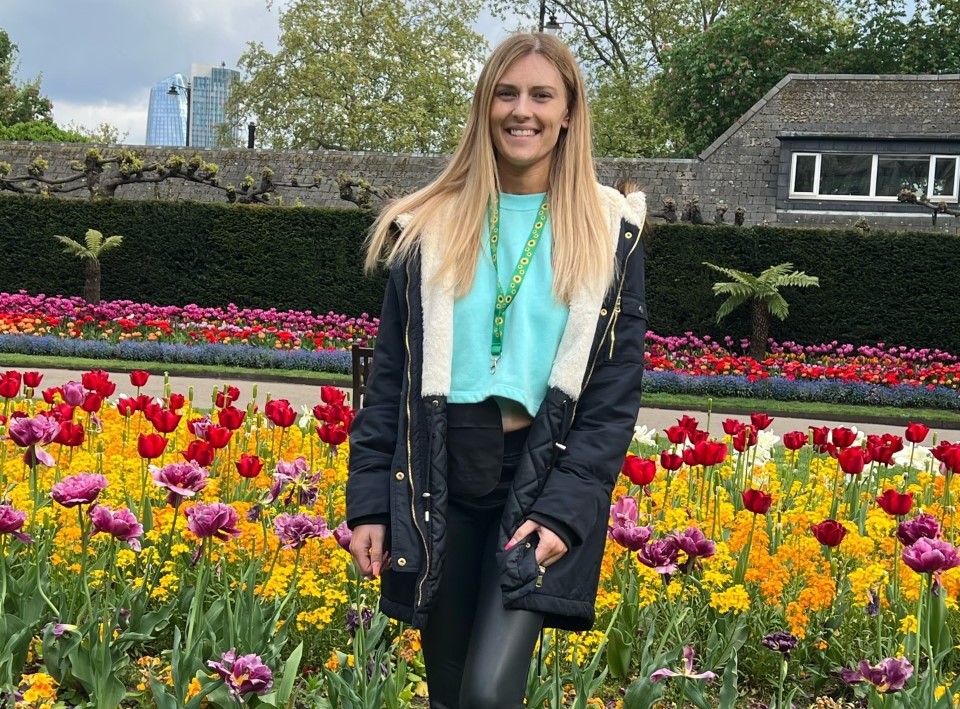 Posing in a new set of lingerie, I smiled for the camera. But as well as a pretty bra and lacy pants, something else was on show: my black stoma bag.

Not your average modelling session, by any means. It felt liberating.

I was 21 when my ileostomy bag was fitted, and while it’s been tough at times, I’ve proved that I’m ostomy proud.

That I can still be sexy.

Except, over the last nine years, it hasn’t always been this way.

My ileostomy – a special black pouch on my tummy – is placed over my stoma, which is where the small bowel is diverted through an opening in my tummy to collect waste that usually passes through the colon, and out of the body.

Before I got it, I was in and out of hospital more times than I can count.

From birth, I had issues with projectile vomiting – I just couldn’t keep any food down.

I can remember being in hospital when I was only five with suspected appendicitis, and being in excruciating pain with severe constipation.

Chronic constipation continued throughout my teens, including bouts of diarrhoea, as well as severe nausea and vomiting, extreme weight loss, constant pain and fainting.

My stomach was so bloated that, as a teen, people would ask when ‘the baby’ was due.

I ended up not going to school a lot of the time due to being sick, and, when I did go, I was severely bullied. I was verbally and physically attacked for anything that those bullies could pick on me for. It took over my life.

Growing up, I saw a lot of consultants, surgeons, doctors, and nurses, who told me that I didn’t need surgery. For so long, they didn’t know what was wrong with me. I felt lost.

The uncertainty and chronic pain badly affected my life and my mental state. I would think: ‘Why me? Why do I have to be in pain?’

At 17, I had my appendix removed because it was on the brink of bursting. In surgery, the doctors noticed that my colon was severely ulcerated and diseased.

While some of my pain had been because of my appendix, the rest of it and other symptoms were pointing towards chronic bowel disease.

But even with this diagnosis, nothing changed.

At one point, I didn’t open my bowels for five months, even with all the laxatives I was prescribed.

I feel like I lost my childhood to trauma, sickness and being in hospital. My teenage years weren’t like anyone else’s, and far from ‘normal’.

My relationships over the years have been extremely difficult, too. Many family members didn’t understand my troubles and it made me feel alone.

At 19, I finally got referred to a colorectal specialist, and eventually ended up getting my stoma in 2014.

One of the stoma nurses suggested I named my bag to help come to terms with a completely new way of life as I wasn’t coping at all. I ended up calling her ‘Daisy’.

As well as being life-saving, this major surgery can also be life-threatening. I was taken back to hospital five days later with a twisted bowel, which led to sepsis and a parastomal hernia.

There were so many different things around my stoma that I mentally struggled with. I had to deal with a lot of leaks. My stitches split open after the surgery, and I was on antibiotics for months. It was hard to look at it, change it, empty it, and leaving the house became too much.

I found it hard to look at my new body and accept this new way of life – grieving my old one, even though I was sick before. Nothing compares to looking down and seeing a part of your own intestine on your belly.

So there was no immediate sense of relief following my surgery, that’s for sure.

But I slowly realised that some symptoms improved, thanks to Daisy. I could open my bowels frequently for a start, and my bloating wasn’t constant. I began, gradually, to come to terms with her.

Don’t get me wrong, I still have a lot of bad days – but I know that she’s saved my life.

The bag itself is always under my clothes, unless I’m wearing something like a bikini or crop top. My first time going to a pool and beach with my stoma bag was last September.

To begin with, I was extremely nervous until my partner gave me the advice to ‘look up, appear confident and they’ll think you’re confident’. And so I did – it felt liberating. I even posted some of my holiday snaps online.

I want others with stomas to know that they’re not a bad thing – and that it’s not something to be ashamed of. That’s why I chose to be open on my Instagram about being a disabled woman living with an ostomy bag.

I post a variety of fashion posts, including lingerie, swimwear, and different outfits.

I wanted to show everyone that all bodies are good bodies, no matter what they look like.

If anything, having my stoma has made me realise that life is precious.

It’s why I’ve also done four charity calendars, where a variety of people with disabilities – physical and mental or both – pose in lingerie, with words written over our bodies to explain our symptoms and how our illnesses make us feel.

Sadly, I’m still fighting against my disease. From chronic pain flare-ups that floor me, to issues with the functioning of my stoma and taking a lot of medicines – I find it difficult to do normal things a 30-year-old woman should be doing: like eating the food that I love, and doing things I enjoy.

But I will keep fighting this, and do what is best for me while proving that I am sexy.

That I am enough.