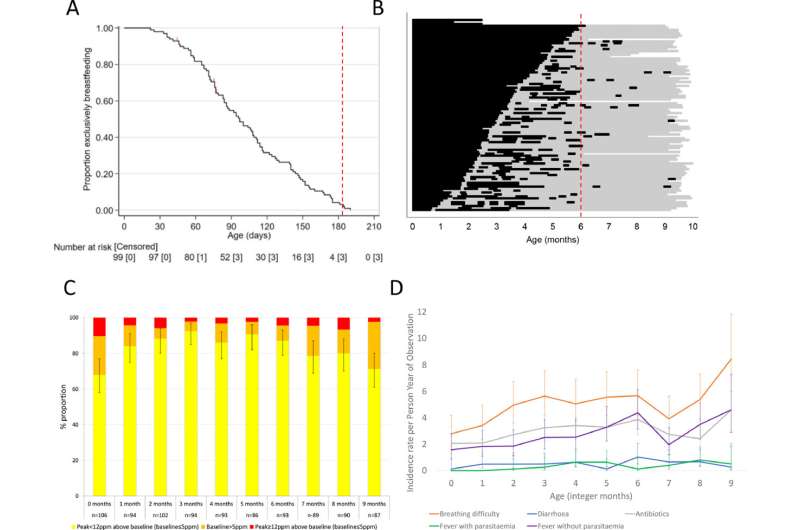 Breastfeeding infants continuously for six months during the rainy season, without including any other foods, may help prevent a disease linked to micronutrient deficiencies, a study suggests.

The disease, called environmental enteric dysfunction (EED), is common among children in low-income settings and is linked to poor sanitation, micronutrient deficiencies and low height in children, the study says.

“Exclusive breastfeeding protects against environmental enteric dysfunction, especially if it is introduced during the rainy season,” says James Berkley, a co-author of the study and professor of pediatric infectious disease at the University of Oxford in England. “Foods other than breast milk are more likely to be contaminated during the rainy season.”

Berkley says the research indicates that poor growth and frequent illness remain common in resource-poor countries and can be linked to environmental enteric dysfunction.

“We do not know the cause of environmental enteric dysfunction or when it first begins in childhood,” he tells SciDev.Net. “We wanted to see if abnormal growth of bacteria in the upper small bowel and small intestinal bacterial overgrowth might be responsible, along with looking [for] other potential exposures like infections, antibiotics, and breastfeeding,” Berkley says. “The findings show that stopping exclusive breastfeeding was strongly associated with [the] disease.”

The researchers studied 100 infants at birth in Junju—a settlement in rural coastal Kenya—from August 2015 to January 2017, and examined each infant for nine months. The babies were periodically assessed for growth and different indices such as diet, breastfeeding, illness episodes and medication.

“During the rainy season, diarrhea, fever and breathing difficulty occurred more frequently, [and] markers of EED were worse,” says the study published in eClinicalMedicine last month (21 April). “We heard from participants’ caregivers that complementary foods consumed during the rainy season have usually been stored for longer and may therefore be at higher risk of bacterial or fungal toxin contamination or loss of nutrient value.”

Goodness Anyanwu, a nutritionist at the Federal Ministry of Health, Nigeria, tells SciDev.Net that the six-month period of exclusive breastfeeding enhances infant gut maturity before the introduction of complementary feeding.

She recommends that the study is used as an advocacy tool for the World Breastfeeding Week that happens globally every August. “Results of research such as this should be incorporated into nutrition education modules, both in the rural communities and urban regions. It will also be beneficial at the national and Sub-Saharan [Africa] level,” she says.